And who ever said being Gay is Un-African- look again! 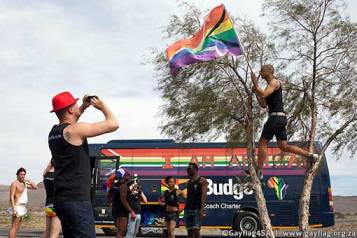 From the bottom of the Continent of Africa to the top of South Africa, a Budget Bus filled with LGBTQI community representatives toiled the bush, the veld, cities and townships, spreading rainbow acts and music, all in the name of full inclusiveness and education against homophobia.  The Gay Flag of South Africa, led its annual tour of the country amidst much to contemplate and celebrate, including the approval of the Gay Flag as a national symbol.

While South Africa has a constitution and bill of rights that includes sexual orientation and gender identity protection and equality, it still suffers from rampant homophobia.

The GFSA is an organization that has reached all corners of South Africa, crossed all the boundaries, embracing all aspects of the SA gay community, to include lesbians, gays, transgender, bisexual, queer, intersex, black, white, Indian, colored, (noting all draconian racial classifications)  as well as all tribes and religions, whether city, town, township or bush!

Here is a journal entry of one such day on tour – indicating an incident probably likely considering the area visited and the ignorance of so many:-

“Mimosa Mall and all!
28 September 2012
By The Flagboys, Eugene and Henry

This morning was pure bliss! I woke up early to go walk the pooches. The architecture and vibe at Emoya Estate is perfect for our; I am African theme.

I minced slowly as the pooches scratched and sniffed and peed whilst the sun peeked through with amazing gold and orange in the “Basotho village” and just basked in early morning sun! The orange earth, the thorn trees the vast open plains and silence is just what I needed after a day on a bus with queens.

Then we mowsied over to breakfast which was hearty and very welcome among the coach crew.

Between “brekkie” and departing for University Free State, it was a complete blurr of blogging, facebooking images, sorting out our videographer Karina and the Damian our photographer, sorting the bus drivers, calling SABC news, OFM and Bloemfontein Courant.

We arrived at University of Free State, and I have to say we were disappointed at the reception this year. We have been working with the faculty and [email protected] students for months, but after promising the world we were a small gathering. Not having one white student as part of the parade was a clear indication that Kovsies is not integrated of united.

Nonetheless we hit the road with our coach and strutted the main road to main hall stopping traffic and giving whiplash with our fierce outfits. A Dodge drove in front of us, rolled the windows down and pumped up the music, and then we walked to the main hall, where we were greeted by the Vice Dean of Student Affairs!

For Genevieve it was a catharsis as she addressed the crowd of brave and colourful [email protected] members, about how she had to leave Kovsies due to homophobia… Phatsi Phantsi homophobia Phantsi! Viva LGBTI Viva! Rung through the air as we addressed the crowd. I then introduced all the people on the bus before Thabo wowed the crowd with “SINGLE LADIES”!

Odidi was cheered on to sing and did a brief accapella “Weekend Special” that had people in grooving!

We then walked to the student center for photos before rushing to OFM via KFC, if you know what I mean!

We had a great short radio chat with the whole crew fo the coach with Jorne for the afternoon drive ‘round tjaila tyd!

We were all famished and needed to stock up on some essentials and as we were driving past Mimosa Mall we thought we’d stop quick quick, for food the boys and base for the queens. Henry stayed with the pooches on the bus as I went to go get some healthy foods as I can’t stomach anymore Wimpy or Steers, only to rush back and see Justin upset. Apparently some security told Lola she needs a permit to be in the mall!

This totally got me riled up. I couldn’t find Lola anywhere and panicked. I ran to the bus to find Henry and told him something was up!

He ran behind me and we went looking for Lola only to find a bunch of security guards menacingly talking to some of our crew.

Henry immediately lost it and told the mall manager and security manager that it was unacceptable to tell Lola she needs a permit to be in the mall. The security and managers wanted to intimidate us and yell us into submission. They however picked the wrong crew to “sukkel” with!

Then Henry also added that he had quickly popped into the mall, only to have a security guard come to him and tell him, he is not allowed to dress the way he did, but went further and actually pushed him around and kept shoving him with his fingers into Henry’s chest.

The managers then saw that they were dealing with some serious activists and Henry quickly told them to tread carefully.

Their point was that we were not allowed to take photo’s. The irony was that we were bushed and really just shopping for some snacks. It was the people who were taking pics of us. However they did not ask the people snapping away to stop photography, but asked Lola to leave and where her permit was. Furthermore he demanded to know which stores she was going to visit and what she wanted to buy, even though it was Lola’s first time to ever set foot in the mall and she was still finding her bearings!

He also said we were disturbing their customers, ignoring the 4 grocery bags in my hands and all the other shopping of the rest of our crew. As if our money didn’t count for anything!

No matter how many times we said, we weren’t taking the pictures, the more they yelled, which made Henry even more angry! Albert also took exception and was told that he was a “lady” that the security guard did not want to speak to.

Henry then again told them that he was pushed and shoved and could lay assault charges and then the game changed. They then apologized to Henry. Henry did not let it stay there… he got the manager and the staff to also personally apologize to Lola!

And this is the point of this tour. What about those individuals like Lola, transexuals effeminate moffies and butch gay girls who can’t conform. What if they were alone and told that they should not disturb customers, even though they themselves are customers.

It is this homophobia veiled under petty powerplay and wanker rules with no signs or notifications to inform you of the rules of the mall that irked us.

I was so upset that a prick of a security guard wanting to exert the pittance of power he has dared to come and push Henry and Lola around and then tell them they do not have the right to be in the mall. Even worse that their management immediately went on the attack with us in stead of approaching us and talking calmly to us.

A mom with kids passing by chipped in and said: “Hey, this is a free country they have a right to be here.” Henry outright asked a women if he was “bothering” her to which she replied; “No, I think you guys are fabulous!”

This is our second year on this tour and for the second time Bloemfontein has delivered a homophobic incident.

This town has some amazing, generous and warm people but also a vast majority who think they are in the right to judge and “bliksem” those that do not conform.

Emoya is going all out tonight and we are ready for a fabulous time with the locals. The show must go on and glitter never fades. So shower, shave, spray and SPARKLE!

These bitches can’t be beaten!

And so now we know why this tour is so important.  The LGBTI community owns its strut and is wiling to take it to the ghamadoolas!

The security guard had probably never seen a transgender person and received his first lesson that South Africa is a place where all people enjoy full equality. Indeed Henry, under the SA Constitution and Bill of Rights, could have pursued action against the Mall and knowing him he will not.

This was a real life moment to educate and it seems the GFSA succeeded.

Read the entire journal at http://www.queerlife.co.za/test/living-well/gfsa-tour-2012/8032-on-the-gfsa-tour-with-karina.html

GFSA is poised to fight homophobia in South Africa and create awareness throughout the continent for the decriminalization of homosexuality.

Pictures used with permission of GFSA who retains copyright. 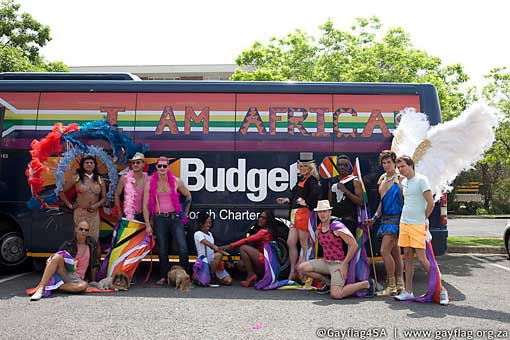 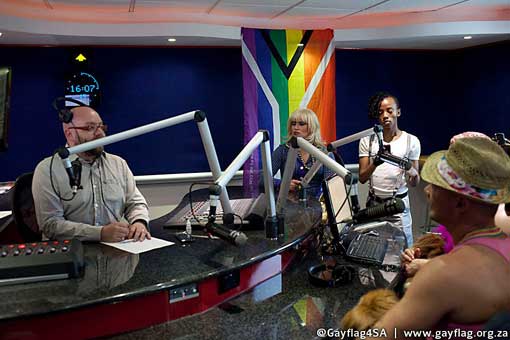