You are here: Home » Gay Flag of South Africa and ANC Hold Historic Public Meeting to Condemn Homophobia in SA 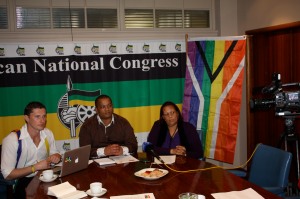 An historic public meeting took place Thursday between the South African majority party, the ANC and the Gay Flag of South Africa (GFSA) an NPO to condemn recent homophobic violence against the LGBTI community in South Africa, as well as the anti-gay commentary by Traditional leaders who are reviewing and seeking to revoke LGBTI rights which are entrenched in the South African Constitution.

With a large group of press and public in attendance, the meeting was held in Cape Town at the Provincial Legislature no.7 Wale Street, where the ANC delivered a clear and assertive stance on the issues.

Earlier this year  Contralesa’s Chairman and ANC MP Phatekile Holomisa placed constitutional protections for sexual orientation against discrimination up for review on the agenda of the Constitutional Review Committee.   The LGBTI community of South Africa, took to the streets in widespread national protests that were initiated by Gay Flag of South Africa and a coalition it had formed of LGBTI groups. GFSA and the protestors delivered 20,000 signatures, gathered in mere weeks,  protesting the assault on LGBTI rights. This culminated in a Mandela Day protest targeting the ANC to demand action against homophobic violence and murder, leading to constructive talks between the ANC and GFSA.

The ANC has now come forward to state it has openly condemned all homophobic discrimination, violence, rape, so called “corrective” rape, murder and most recent mutilation against people on grounds of their sexual orientation.

The message:
Through deliberation and consultation between the ANC and the GFSA, the ANC strongly condemns:
•       homophobic hate crimes and murders;
•       any review or discussion of entrenched constitutional rights regarding sexual orientation and gender identity; and
•       a recent tendency in conservative and traditional communities to use culture as a justification for homophobic discrimination and violence.

GFSA stated that the talks were of great importance because the ANC, due to its majority and popularity in South Africa is capable of sending a broad message to vast segments of grassroots, traditionalist and the broader society that LGBTI Rights are Human Rights, and that each and every South African must be respected, irrespective or sexual orientation or gender identity.

The two organizations are of the hope that the meeting and strong message would shift public perception to acceptance and make it clear that crimes of hate and murders will no longer be tolerated in South Africa. “If our message saves lives, educates and sensitizes, we would have achieved a milestone today”, said Henry Bantjez, GFSA director.

“It is my believe that gay rights are human rights and that no homophobic violence or prejudice should be tolerated. The ANC has always endeavored to build an equal and progressive South Africa. The ANC’s values are guided by the South African constitution, where we develop a equal non-sexist, non-racial and non-homophobic nation”, said Comrade Songezo Mjongile, Western Cape ANC secretary.

He continued to say:

“As the ANC, we rather observe the most progressive and advanced cultural norms, which speaks to the right of every South African to their lifestyle, life partner and sexual orientation. As such, each South African’s choice of identity has to be respected.”

GFSA’s chair Eugene Brockman said “As an activist for and member of the LGBTI community in South Africa it is truly encouraging to hear the ANC today condemn homophobic violence and murder in South Africa. Though we are a politically neutral organization, we are excited by the ANC sending a message of acceptance and respect for LGBTI South Africans to their vast constituencies.

GFSA noted that in moving forward so much more needs to be done:

“ we are looking to further collaborate broadly with many more organizations, groups and activists to promote acceptance and dignity for LGBTI South Africans,” said Brockman.

The ANC and Gay Flag of South Africa will take the following actions:
•       approach and lend support to re-activate the Task Team which had been established to explore reform, noting the Team’s work on homophobic violence must be made visible to CONTROLESA in its attempted review of constitutional rights on sexual orientation nor the recent homophobic murders.
•       assist in expediting investigations and prosecutions of homophobic crimes.
•       to build capacity of police and the justice system to process these cases and to avoid secondary victimization.
•       continuously raise awareness for acceptance and respect of LGBTI rights and lives.

Ways for public to participate:
•       any activist, non-profits or community based are encouraged to contact the Gay Flag of South Africa to collaborate on promoting LGBTI rights and justice.
•       to report any homophobic discrimination, attack, rape and or murder immediately to the nearest police station and magistrates court. All South African magistrates courts also serve, as equality courts to handle complaints of hate crimes.
•       to support friends, family and community members who are victims of homophobia, by referring them to appropriate organizations.