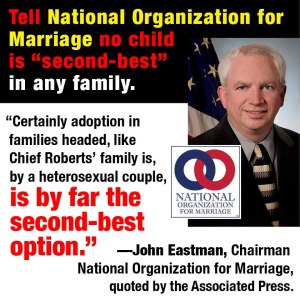 The National Organization for Marriage (NOM) specializes in insults.  Usually such insults are directed at the gay community – our love, our marriages, our families.  But today they struck out against adopted children.  And not just children in gay adoptions, but all adoptions!  NOM’s chairman, John Eastman, said:

“Certainly adoption in families headed, like Chief Roberts’ family is, by a heterosexual couple, IS BY FAR THE SECOND-BEST OPTION.”

I’m sure that doesn’t make adoption in families headed by a gay family the BEST option coming from NOM so it is just a widespread slam of ALL families who adopt!  Because adopting children is good but still a notch down from having your ‘own’ children!

All this coming on the cusp of  the Supreme Court hearing two cases dealing with marriage equality for same-gender couples, the Defense of Marriage Act (DOMA) and Proposition 8 challenges on March 26th  & 27th  And one day after the Catholic Church has anointed a new pope who has called gay adoption “discrimination against children”!

As a matter of further interest, two justices, who will likely vote against gay marriage, have adopted children says an AP article, noting Chief Justice John Roberts is the father of two children, Jack and Josie, both 12. They were adopted four months apart as babies in 2000, after Roberts and his wife, Jane, then 45, spent several years trying to adopt. The Roberts family discussed the adoption for a biography of the chief justice that was aimed at young readers and published in 2006.

Justice Clarence Thomas and his wife, Virginia, took custody of Thomas’s grandnephew, Mark, when he was 6, in 1998. Soon after they were married in 1987, the Thomases decided they would not have children of their own, author Ken Foskett wrote in his biography, “Judging Thomas.” Mark’s father had been in and out of legal trouble and his mother was raising three other children on her own. Thomas also has a biological child from his first marriage, which ended in divorce.

So if as NOM claims, as they do in many of their attack ads, while advocating against marriage equality, that ‘marriage was “made by God” for the purposes of procreation’ why then are the Roberts and Thomas marriages even allowed? One wonders if the Justices would factor that argument in to their likely dissents and in doing so to what extent their personal lives will impact their decisions, if not their consciences.

For the gay community whose youth make up to 40% of those unaccompanied and homeless out on the streets, adoption into any loving home would certainly be the BEST option.  Many of these youth end up on the streets following verbal, emotional and physical violence from their birth parents if they weren’t just thrown out for coming out.

John Eastman at a minimum, if not NOM itself, should issue an apology immediately for the shameful and hurtful insult rendered at all adoptive children and the loving families they belong to.  There is NOTHING second best about a loving family no matter how it came to be.  Shame on NOM! notes writer /activist, Scott Wooledge.