You are here: Home » A story from the steps of SCOTUS | Hoping the Justices consider the children hurt by Prop 8

There was no keeping me away from Washington D.C., on Tuesday 26th, the day that The Supreme Court of the United States (SCOTUS) would be hearing the Prop 8. arguments.  I was there ‘wearing many hats; activist, blogger, co-producer of Gay U.S.A. the Movie, and the most important of all, that of ‘American mom.’

Woman on knees praying at SCOTUS steps because Melanie told her that her daughters have two moms. Photo: Cathy Kristofferson, Oblogdeeoblogda©

Standing on the steps amongst the thousands screaming for equality, I noticed a woman with an offending sign. When I told her I was a lesbian mom with 2 perfectly well loved, accomplished daughters, she got down on her  knees and started to pray for me.  I suggested she pray for the straight parents who had kicked their kids out of home, often in the middle of the night, just because they were gay.

I then reflected back on my family’s experience in 2008, when a slim majority of California voters, with the multimillion dollar infusion of Mormon Church funding, robbed gay and lesbians of their fundamental constitutional right to marry, creating a denigrated class of families. It was my daughter and thousands of other kids from same-sex families who had been hurt, not the others in the USA who already have their full equality.

I thought about the nine justices and how they would decide the fate of that Proposition. I wondered if they realized to what extent our American children have indeed been hurt by the hate engendered by Prop 8, and all the discrimination that makes American gays continued targets of hateful rhetoric, speech delivered through media and ads. Imagine if we had full equality – like African Americans – targeting our children would no longer be an option. But for as long as we are discriminated against in marriage and other spheres of our life, our children will bear the brunt of the assault.

I hope the Justice’s decisions serve to reach out to those children in America who have been oppressed and pained by Prop 8. Here is one story:-

HC, my twelve year old daughter, was in middle school at the time of the Proposition 8 vote. Superbly astute, a seasoned traveler and well adjusted, she enjoyed the reputation of the ‘A’ grade kid who wanted to please. As a baby she earned the name “little Buddha,” always kind, quiet and complacent.

Throughout the years since her adoption from the Vietnamese orphanage, we never had occasion to discuss the fact that many Americans disregarded our family or that the law of the United States regarded our familial status as second class, undeserving of equal rights under the law. We simply lived our lives like anyone else and no one in our progressive community ever expressed anything negative regarding the validity of my daughter’s two-mom family.

About two weeks before the November 2008 election and the impending Prop 8 vote, HC and I were driving our route to school, engaged in our usual morning tussle between the Stephanie Miller Show and Radio Disney, when an advertisement popped on the radio.

Listening to the twisted misrepresentation, “… and your children will be forced to learn about homosexuality and gay relationships,” followed by  “…your churches will be forced to marry them… blah..” I glanced over at HC and was struck by an unusually perplexed expression on her usually placid face, one which I will not easily forget, as she asked, “ Hey Mama, that was weird,  I don’t understand what is wrong with other kids learning about our family; what do they mean?”

I was stunned!  The distinctly unkind advertisement had placed a sudden unanticipated cruel perspective in the innocent mind of my child.  Our perfect world changed forever that day.  Unprepared, I was thrust into sudden explanation– this advertisement had called for this very question by my child, who until that moment lived so openly and so normally in an accepting community, where our ‘same-sex-ness’ was the least of our day-to-day issues.

Surely the average adult would know how harmful such words would be over airwaves where anyone’s child could be in earshot?  Here were adults misrepresenting our family, with purported child victims, while making my child the victim of their venom.

Unprepared I had to come up with a response to this ferocious fanaticism. I explained, “Hun, I don’t fully know why our family is a problem for other people.  Maybe fear on the part of those who think we all have to be the same as each other, by people who do not understand that we are not all the same. But, we do live in a world where people are different to each other and sometimes differences cause fear. What you heard on that ad, was unfair and contorted, but that is how the people who are against the idea of same-sex marriage think they can get other people to join their way of thinking.  Most smart people are not taken in by it,” I added with certainty.

Gavin Newsom, former San Francisco mayor,  at SCOTUS gave the press his impression of the proceedings, Melanie looks on. Oblogdeeoblogda©

A few more questions and answers later we arrived at school, and went on with the next two weeks, but now with a deliberate decision by me to include both my daughters in my anti-prop 8 activism. I decided that it was important for me to have my kids accompany me to the various “NO ON 8” rallies, to help them understand that we would not be victims of rhetoric or hate and to see that there were many people in the community who were going to help us fight this – yes no escaping it was indeed an attack on our family.

The “Yes on Prop 8” win came as huge and unexpected shock. We were all devastated; and we cried that night wondering what next – what this would mean for our family.   I had a lot more explaining to do.  I tried my best and reassured my daughters that we would be okay. That in the end fairness and justice always prevails.

Little did I know the pain was only just beginning for HC. Then came the most profound attack of all.  The most important person, in HC’s life, other than her family, was about to make a devastating revelation and it would destroy her comfort in a way I could never have anticipated. 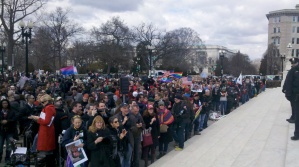 Crowds on the steps of SCOTUS for DOMA hearing, Photo by Melanie Nathan©

HC had always held her teachers in the highest of esteem, regarding them in god-like fashion, always wanting to please. She is the kind of child who complained if she needed to miss school. She loved it! Her teachers were her heroes and she performed accordingly!

The day after the vote, when HC came home from school she told me that her teacher, Mrs. Ray, had told the class that she had voted for John McCain. Living in Marin County California, I do believe the kids found this announcement quite odd.  That did not seem so bad to me. I explained that not all people thought Barack Obama was best for the country and that it was okay for her teacher to have that view.

And then came the horrendous zinger: “Mama its soooo weird Mrs. Ray also told the class that she voted “yes” on Prop 8; and I think she must have been just joking!”

Well long story short, Mrs. Ray was not joking – and my child’s world was rocked yet again; and this time no explanation could replace what seemed like a blow to the core of her being; her hero hated our family.

For the next three weeks, being at school and in that class become a nightmare for HC. I realized that despite my promise to keep quiet, I needed to see the principal. 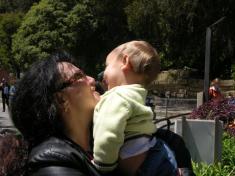 The Principal, who happened to be an “out” lesbian, was not surprised to see me show up, noting she had expected me a lot sooner.  She explained that I was the fourth parent to show up to complain about the incident of the teacher’s lack of restraint. 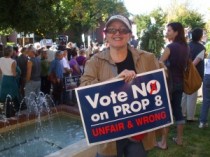 Melanie at Prop 8 rally in 2008- Oblogdeeoblogda©

The Principal gave HC the option to change teachers by moving to another home class and reassuringly explained to HC that it was not because of her, but rather because of Mrs. Ray, the teacher. HC chose to make the move.

Fast forward 2013 and now 16 year old HC is back to being her happy and super-accomplished self, a compassionate, politically savvy and fabulously creative young woman.

I am now able to see the positive aspects of our struggles as a family of lesbian moms and how it has served to shape the brilliance of the being of my child.  She understands her world and she sees it as exciting and knows her future, just like her past, is profound. She has been part of an historic struggle for civil rights and she will continue to fight the battle if need be.

I truly believe that because of our fight and my activism that my child will never be further harmed by any perceived abnormality of her family, by people who she now understands are fearful and often cowardly in their inability to accept difference and change.  She understands bigotry, bullying and intolerance and she is poised to participate in a new changed world. But what about the other children? What about those who have not shared her experience, where we confronted the issue and tackled it head on? Must those children continue to suffer?

Our children do not deserve to be the political pawns of the divisive and fearful bigots and religious right in our country. 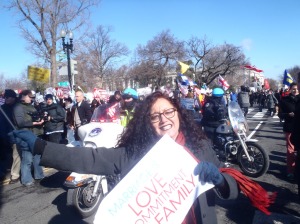 So when I stood so proudly on the steps of SCOTUS last week, I looked boldly in the eyes of those carrying signs saying “children deserve a Mom and Dad” and knew that they had missed the final sentence: “or any parent or parents who love them unconditionally.” I hoped the Justices, all of them, would get it!

Now Prop 8 is in the hands of ‘The Nine Supremes’ and I am typing this as my plane lands from my week in D.C. a proud lesbian mom leaving the steps of SCOTUS, and hoping that after the past four years of continued injustice my child’s pain will be redeemed though equality and justice for all.

← Remembering Dr. Martin Luther King Jnr. as a leader in equality for all
San Francisco Pride expects bigger crowd due to SCOTUS Prop 8 and DOMA decisions →