In  August Uganda Pride was postponed after a brutal police raid  shut down a pre-Pride beauty pageant.  The Ugandan LGBT community attempted to hold its Pride celebration today, but was raided and shut down by Police, with reports, again, of many arrested.

One well known LGBTI activist managed to avoid arrest by refusing to leave public property, however reported live on Facebook as authorities impounded her motor vehicle.  The police were made aware of the celebration, in the Pride Committee’s attempt to ensure that it was in full compliance with the law regarding public gatherings. Yet it seems a mere rainbow flag triggers oppression.

The August pageant raid is being challenged as unconstitutional.   It seems that the freedom to hold a peaceful gathering of friends and community is subject to attack and closure, in Uganda, and that the trigger of this oppression may be a mere rainbow flag.  We will update as  soon as we hear more from the Pride Committee and activists in Uganda.

6:00 am I was on my way to pick up the dancers. We set off to Entebbe at 7:30 and by 8:00am we were already at Pride venue to do the sound check preparing for the performances. The stage was already set, the P.A was set and the BBq chef had started roasting the pork, chicken and beef. We didn’t forget to carry our placards, so we started taking photos of us as we wait for other people coming from Kampala to arrive. Just a few minutes after taking the photos Police came and commanded the stage and all rainbow decoration to be put down, the Chef to pack all the food plus everyone else who was at the venue to leave immediately.

Thank God I was able to capture the early morning moments of Pride set up and I thank the 100s of Lgbt people who stood together and went ahead to step on the 2016 pride parade venues. They should be regarded as a heroes and heroines. #istoodwithprideuganda Aluta Continua.

We await further word about possible arrests and detentions. 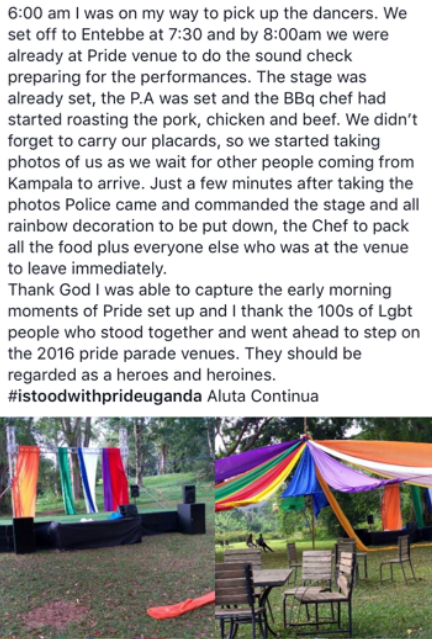 STATEMENT FROM KASHA JACQUELINE NABAGESERA IN RESPONSE TO FATHER SIMON LOKODO, the Minister of Ethics and integrity who consistently orders the arrests of LGBT people and the raids of LGBT events, after the August 4th event:

Over the last couple of weeks, Uganda’s LGBTI community has been subjected to not only assaults by the Police but also violations of our rights as a people, by the very government that is meant to protect us.

On 4th August 2016,Police raided Club Venom in Kabalagala where the Mr and Miss Pride contest was taking place. People were beaten, transgender persons had their hair pulled out and were sexually violated as uniformed officers touched their privates, people’s pictures were forcefully taken with threats of having them published in the media, unwarranted arrests were made and a young man who is now still bed ridden nearly lost his life after jumping off the fourth floor of Tirupati Mall.

This is just a part of what happened that night, leave alone the trauma and pyschological torture the community has been subjected to by the ordeal.

Pride is an annual festivity where we (LGBTI persons) get together and celebrate our successes and take time off to appreciate our differences. All year long, we deal withh hardships ranging from forceful evictions, lynchings, constant attacks, lack of proper medical services as many medics are still not open to handling LGBTI cases, dropping out of schopols due to expulsions, losing jobs … this list is endless. All these are due to the fact that our sexual orientation and gender identities are different from what people have been taught to believe is normal. So for just one week, we put our troubles aside and celebrate life and the gift of being alive. This is the essence of Pride- being thankful that as a community, we still stand strong despite the hurdles life continues to throw at us.

In his statement, the Minister of Ethics and Integrity Father Lokodo claims Pride is aimed at promotion, exhibition and recruitment of people into the LGBTI movement. This could not be further from the truth. Time and again , the Minister has used this recruitment theory to plant fear and hate into the hearts of Ugandans and we have countered by asking him to bring his proof forward. Again, we now besseech you Father Lokodo, who gives out this money that you continously speak of and where is it given out? We must stop inciting violence on an innocent people without proper facts or presenting them.

He also ties the LGBTI movement to prostitution and padeophilia. Today, I make this clear, we as a community know there is a clear line beteween crime and being who we are. We do not, in any way, support sexual acts that involve minors or sexual acts that are not consented by adults. The notion that the movement encourages these two hideous crimes is wrong.
As a community, we refuse to back into a corner because someone threatens our rights to assembly and expression; we will go ahead with our Pride Parade on the 24th of September. It is a peaceful gathering by peace loving citizens and we can only hope that we will be respected.

Police was notified about this gathering and we were granted permission to go ahead with our parade. We have committed no crimes and will not let a homophobic minister ruin the one day we celebrate our individuality, our diversity, our pride.

Aluta Continua
For God and My Country
Founder Pride Uganda

This latest raid , following this statement, indicates just how pervasive the constant persecution against LGBT people is in Uganda.

At this time there are hundreds of LGBT Ugandans who have escaped persecution and are now UNHCR refugees in Kenya, resettled abroad or asylum seekers on other parts of the world. READ MORE on refugees and asylum seekers HERE.