You are here: Home » Birds of a feather… Duvall resigns…Jeff Miller caught between a rock and a hard place

Because Duvall, who is married with two children had one of those Internet moments the other day when his dais microphone became live just before the start of a cable-televised committee hearing… and he was talking with one of his fellow committee members about cheating on his wife with a lobbyist forSempra Energy, one of the state’s largest utilities.

“She wears little eye-patch underwear… So, the other day she came here with her underwear, Thursday. And so, we had made love Wednesday–a lot! And so she’ll, she’s all, ‘I am going up and down the stairs, and you’re dripping out of me!’ So messy!”

HELP ME CHOOSE A MORE APPROPRIATE TITLE FOR MY POST

1. Michael Duvall Orange County State Assemblyman‘s wife will stand by his side after someone tells her about this;

2. Should Duvall’s rating with Capital Resource Institute be renewed?
Curently rated  100% for DUVALL – for “Time and time again voting to protect and serve Family Values in America.”  Does this mean one has to Walk the Vote?

3. Should DUVALL apoloogize to his constituents or should he apologize to the LGBT families denied their marriage rights by virtue of Prop 8?

4.  Michael Duvall Brags about Sexual Affairs with woman 19 years younger, – exposed by an open mike in committee-
But then again he was expecting the Mike to be in the salt shaker.

5. Staunch Republican adds Lobbyists With Benefits to list of Priorities

6. DUVALL is Pro Prop 8 for fear of what gay marriage will do to Family Values.

7. Is Duvall just another hypocrit or a liberal plant to make Republicans look bad?

8. Who should clean up the mess (on the stairs dummy! Duvall or his wife?)

Thanks to Paula Brooks of www.lezgetreal.com for bringing the story!

Guess what update –   Duvall resignsin disgrace.  http://www.kcra.com/politics/20814160/detail.html and note this from the article quoting Duvall himself: 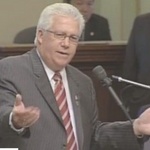 “I am deeply saddened that my inappropriate comments have become a major distraction for my colleagues in the Assembly, who are working hard on the very serious problems facing our state,” Duvall said. “Therefore, I have decided to resign my office, effective immediately, so that the Assembly can get back to work.” …………………   WHAT about remorse for your hypocrisy – for betraying your wife, your kids, your constituents,  There could not have been a better example of (instant) karma.

Jeff Miller was the member who was being spoken to.  Miller says he paid no attention to what Duvall was saying.   I would refer to Mr. Miller’s comments when I testified before the Committee a few weeks ago, (see my prior BLOG post.)   Mr. Holier than thou Miller who supposedly heard nothing – hard to believe he was distracted when Duvall sure went on.  All I can say is “BIRDS OF A FEATHER FLOCK TOGETHER”

I would ask that by mere virtue of the conversation that an ethics investogation be launched into all these buddies.