You are here: Home » My Tweet Conversation with Anonymous About Hacking Uganda Government for Gays

My Tweet Conversation with Anonymous About Hacking Uganda Government for Gays

Pinkk @Ninj4 joined in justifying the  hacking of Uganda’s Government sites, for the group of loosely connected hackers who call themselves Anonymous.  Uganda’s Government websites were hacked and defaced earlier this week by @DramaSett3r.  The hacksters asserted that their actions were to protest the Ugandan Government persecution of the LGBTI community of Uganda where being gay is considered criminal and where legislation is pending Uganda’s parliament that would impose harsh prison penalties on gay people, including the death sentence for so called “aggravated homosexuality.”

Anonymous defaced the websites of the President and the Government of Uganda, depicting feigned posts from Government including apologies by the Ugandan government to the Ugandan LGBT community for repeated persecution of gays and lesbians in Uganda.

A few international activists who write extensively about  LGBT Uganda, including Box Turtle Bulletin‘s Jim Burroway, Melanie Nathan and Val Kalende all noted that the actions of Anonymous may have caused more harm than good to the Ugandan LGBT Community.

The Advocate wrote: “Melanie Nathan, the blogger who wrote about the photos, was critical of Anonymous’s use of the image because she said it could put in danger an activist who it featured and who wasn’t involved in the hacking. Nathan had praised Pride participants in her article on The Advocate‘s website for bravely taking part in the events in a country that criminalizes gay sex and that has proposed the infamous “kill the gays” legislation, which has so far languished in Parliament.

“While I support all protests against the anti-gay Ugandan Government, I  fear this may cause a backlash to the LGBTI community of activists who so bravely showed their faces at Pride.”

Today SMUG, one of the most active LGBT leadership groups in Uganda came out with a very strong statement, vehemently condemning the cyber attacks:

“No member in our office, network, or in the Ugandan LGBTI community was consulted or involved in this action by “Anonymous” in any way. The hacking of government websites and the corresponding statements by Anonymous do not reflect the views of SMUG and its partners, allies and/or friends. As Ugandans ourselves, we stand with our community and equally share in the burden of this illegal and counterproductive action.

Sexual Minorities Uganda  (SMUG) does not condone the activities of this group and shares in the dismay, frustration and anger that our fellow citizens have experienced. We are prepared to work with the Ugandan government to ensure that those responsible for this action are found and held accountable.” The full statement can be seen at http://oblogdeeoblogda.me/2012/08/17/uganda-gay-lgbt-groups-vehemently-condemn-the-anonymous-hack-of-ugandan-government-sites/

“Anonymous’s actions show an appalling disregard for the efforts of Ugandan LGBT leaders and a gob-smacking huberis that they, from the comfort of their bedrooms and coffee shops, know better than the Ugandan LGBT people on the ground. Meanwhile, those very same Ugandans are on Facebook bracing themselves for what may come.”

Given the general consensus of those of us “in the know”, I decided to engage Anonymous on Twitter as I wondered of they were remorseful about the upset they had caused amongst the Ugandan LGBT community. I wondered if Anonymous realized the harsh consequences that could follow and the backlash that could occur against the LGBT community. I have already heard of a few community members who have gone into hiding because Anonymous used photos depicting their images which may be incorrectly  construed  by Ugandan officials as synonymous with the attack.

Here is the chain of tweets between me and Anonymous hackers who show no remorse and instead attempt to justify their actions. Despite their assertions to the contrary, they remain paternalistic and entitled in their response.

MY QUESTIONS AND ANONYMOUS’ RESPONSES: 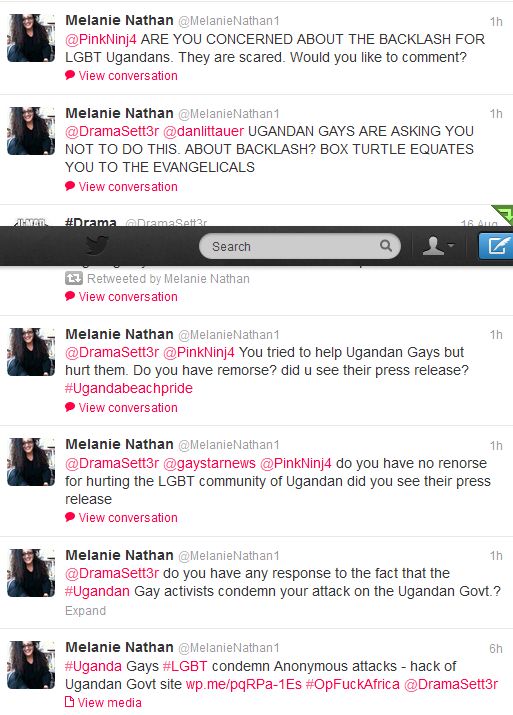