“What is wrong to be humankind?” 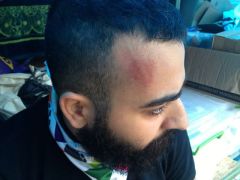 This morning I saw a post in my Facebook news feed from Istanbul LGBT Onur Haftası/ Istanbul LGBT Pride Week requesting desperately needed motorcycle helmets for the LGBT BLOCK at Taksim Gezi Park.  I was really trying to figure how to beam them my helmet that sits here collecting dust now that I am dyke-without-bike since it would do someone over there way more good. It wasn’t difficult to imagine why they needed motorcycle helmets then I saw reports that members of the LGBT BLOCK had been beaten and arrested while delivering humanitarian aid – food, drinks and medicine – to protesters.  Too bad it wasn’t my helmet that took the beating.

“POLICE BEATEN AND ARRESTED LGBT ACTIVIST
LGBT ACTIVIST HASAN YAVUZ
Police stopped GLBT ACTIVIST HASAN YAVUZ at Dolapdere area while he was carrying foods, mecines, drinks to the Taksim gezi parkı resistants yesterday night around 23:30. Polis questioned, judged and accused Hasan in the middle of road, as he is helping and supporting to ressistants to criminate him. Hasan replied back to police that: “ He is helping people who is sufferıng in GeziPark who need humanity. What is wrong to be humankind?” Police pushed Hasan to overthrow on ground and than keeping on beating him in the middle of road. They arrested Hasan, took to the Kasımpaşa polis station. Hasan Custody 4 hour, event did not let him to see doctor for medical examination before custodyıng and after let him out. Hasan’s Lawyers proceeded about polices who arrested, beaten Hasan today in the law court.” RISK MANAGEMENT/LGBT BLOCK – COORDINATION LGBT BLOCK

3 LGBT ACTIVIST HAS BEEN ARRESTED TODAY!

Turkish Police Arrested 3 LGBT activist while they were asking the police for an address, behind the Haberturk media center. And than took them to the Homeland police center which located in the Aksaray area. the firm are observing the arrested activists.
LGBT BLOCK KORDİNASON-LGBT BLOCK COORDINATION

All of this violence against protesters in Turkey seems without regard for who any of the individuals are – they are all just hooligans to the Police.   In a blog piece entitled “Times of Hope and Despair: Lessons of Democracy Gezi Resistance Has Taught Us”, Ipek Demirsu on Critical Legal Thinking  has documented how disparate groups, like footballers and LGBT & women’s groups, are helping and learning from each other:

“Yet, the cul­ture of foot­ball in Tur­key is gen­er­ally imbued in a heavy pat­ri­archal men­tal­ity, whereby many slo­gans carry sex­ist or homo­phobic under­tones. The Gezi res­ist­ance has given way to a pro­cess of learn­ing and under­stand­ing between the Çarşı foot­ball fans on the one hand and the LGBTT and women’s rights organ­iz­a­tions on the other. The lat­ter has been endeavor­ing to cleanse the lan­guage of protest from sex­ist and homo­phobic expres­sions, and the former has been quite attent­ive to such warning.

In one incid­ent, a friend of mine explained a con­ver­sa­tion that took place between him and a couple of mem­bers of the Çarşı group, who were shout­ing out to the police call­ing them ‘fag­gots’ (or ibne in Turk­ish). Being offen­ded by such remarks, my friend approached the Çarşı group and told them he was also a ‘fag­got’ and that such lan­guage was homo­phobic. The response he got was that unlike the police, he was an ‘hon­our­able’ (delik­anlı in Turk­ish) fag­got, sup­port­ing the res­ist­ance. Fol­low­ing this humor­ous exchange, I was told that the Çarşı group has paid a visit to the LGBTT organ­iz­a­tion Lambda and ini­ti­ated a pro­cess of cooper­a­tion and mutual understanding.”

You should really go read the whole piece.  It’s quite enlightening.

Call it strange bedfellows or the solidarity brought on by the necessity of self preservation, but the Turkish activists are making strides in “cooperation and mutual understanding“.  The Turkish government, on the other hand, continues to  brutalize its people in an ugly show of authoritarian rule.