First the brutal murder of Henry Mbah, and now his love of five years, Elevis Atabong, 24, dies under suspicious circumstances.

In 2013 we reported the story of a mob murder of a gay man in Cameroon, soon after the murder of well known activist Eric Lembembe. The murder of Henry Mbah occurred in Muyunge, a village in the Muyuka subdivision in the South West Region of Cameroon. Now we are recieving unconfirmed reports from sources of the death of his partner, Elvis Atabong.

The Brutal murder of Henry Mbah, 35 and the aftermath experienced by his lover Elvis Atabong, 24 , is reported here on OBLOGDEE, where, inter alia, we noted:-

“It was Elevis’s birthday and Henry went to visit him. Henry did not know that Hellen was following him.  Expecting to catch him with another woman she was shocked to find Henry embracing Elvis and she screamed out. People, startled by the screams started to arrive outside the room, and before long a crowd formed, dragging Henry out. They started to beat him and pelted him with stones.  By the time the police arrived on the scene, Henry was already dead.”

“A courageous Elvis (Elevis), is apparently refusing to deviate from the truth, and is sticking by his story, that in fact he is Henry’s lover. He wants justice for Henry. And he wants the responsible murderers arrested for the crime. And so the police have continued to detain Elvis, who through his admission, will be subject to five years in prison, if he admits or there is evidence that he is gay.”

Elvis was in detention in Muyunge and after controversy released.

He returned to law school in Sierre Leone. A source reports that Elvis returned home to Cameroon possibly lured to get more money for school:

He came back from Sierra Leone were was in the law school. He came back home to look for money. He went out last night with some friends at about 10pm and he came crying that his stomach was in extreme pain. He was rushed to the hospital by his mom and he died on the way.”

Last night complained of severe stomach pains. He was rushed to hospital and died. Sources believe he was poisoned.

The story is developing. 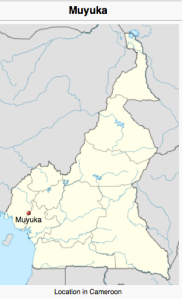 3 thoughts on “Another Possible Murder in Cameroon of Gay Man”