He braved not only the challenges of the peak, but also the Ugandan Anti-Homosexuality law #prideflagatopUganda #RepealAHA

Marin County Founder of Three Twins Ice Cream braved not only the challenges of the peak, but also the Ugandan Anti-Homosexuality law while issuing a challenge to President Museveni. 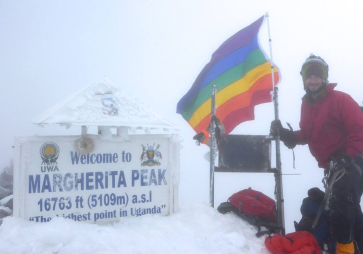 The police of Uganda will have a long and arduous climb to procure the evidence for a potential crime recently committed in Uganda. Yes as ridiculous as it sounds, the mounting of a PRIDE rainbow flag atop Uganda’s highest peak, could be construed, under the new Ugandan Anti-Homosexuality Act, as a crime, with a prison term, of a good few years.

In defiance of the the new Anti-Homosexuality Act of Uganda, Neal Gottlieb, a founder of Three Twins Ice Cream, based here in California’s Marin County, climbed Mt. Stanley, Uganda’s highest peak, to mount a Pride rainbow flag at its highest point. Indeed this flag could serve as evidence itself under the newly constructed Ugandan crime of so called (and without clear definition) notion of “promoting” homosexuality.

In a  challenge to Museveni, and while we are at it lets add David Bahati & Rebecca Kadaga, the soiled proponents of the anti-gay legislation, to remove the Rainbow flag, we know it will forever wave a top Uganda’s highest peak, in the ultimate act – not of “promoting homosexuality” as the ugandans may have you believe – but in the act of setting the ultimate height for promoting one of the most very basic and fundamental of  human rights – the right to one’s sexuality!

This is the note on Neal Gottlieb’s Facebook page, where he published a letter he addressed to President Museveni:

What I did on vacation:1. Summited Uganda’s highest mountain.2. Mounted a gay pride at the summit of Margherita Peak in protest of Uganda’s recent criminalization of homosexuality.3. Wrote a letter to Uganda’s president, Yoweri Kaguta Museveni :April 22, 2014Dear President Museveni of Uganda,On April 16, 2014, after a 6-day climb, I summited your country’s tallest peak, Mount Stanley’s 16,753 foot tall Margherita Peak, (Rwenzori range) and mounted a gay pride flag at its summit in protest of your country’s criminalization of homosexuality. Your country’s highest point is no longer its soil, its snow or a summit marker, but rather a gay pride flag waving brilliantly, shining down from above as a sign of protest and hope behalf of the many thousands of Ugandans that you seek to repress and the many more that understand the hideous nature of your repressive legislation.The wiser of us understand that humans possess certain unalienable rights. These rights include freedom to express oneself, freedom to worship one’s god or none at all and freedom to live and love as one is born.Despite this, you recently signed legislation into law that allows those born homosexual to be imprisoned for life. This is a disgusting, despicable act that threatens to ruin countless lives. If you had a son, daughter, niece or nephew that was homosexual, would you want her or him to be imprisoned for life? What if you have friends that are closeted homosexuals? Should they be locked up for the rest of their lives? If you were born gay, would you deserve to be imprisoned?In a country that is dependent on the United States to fund the majority of its HIV/AIDS care, where less than 5% of those with cancer have access to treatment and where those with access to electricity is still a small minority of the populace, does it make any sense to devote precious and limited resources to imprison those who should be free? Does it make any sense that your administration never successfully prosecuted anybody from Amin’s reign of terror that resulted in over 100,000 murders, yet you wish to imprison for life those who have not committed atrocities but are simply born gay?As the president of a nation you have the opportunity to be a great man and lead your country forward. Instead, you choose to hold your people back like the imperialists, the dictators and the warlords that have held Africa back generation after generation. The people that you wish to imprison are the same people who can help Uganda grow into a great nation.

When you choose to deny the people of Uganda their human rights, you are no better than Amin.

If you don’t like said flag on your highest peak, I urge you to climb up and take it down. However, you are an old man and surely the 6-day climb through the steep muddy bogs and up the mountain’s glaciers is well beyond your physical ability. Your days are more limited than most. Do you want your remaining days to be yet another blight on the history of your nation or will you find the strength to reverse your actions and allow all Ugandans to be free?
With all due respect,
Neal Gottlieb

P.S. This protest action is mine and mine alone. Neither my fellow climbers nor the Ugandan guides and porters had anything to do with it. The Ugandan guides present at the summit as the flag was mounted had absolutely no idea what the flag stands for, nor did they ask.

This is how The Ugandan News Tabloid, Red Pepper, known for outing “suspected” gays publicly decided to celebrate the climb:

Now Two Marin people have made it into the Red Pepper – first Melanie Nathan, named twice once as one of “Uganda’s Top Homos” and the second time a a member of the “Homo Cabinet.” And now joined by Neal Gottlieb. 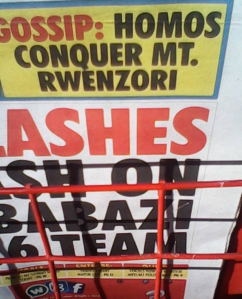 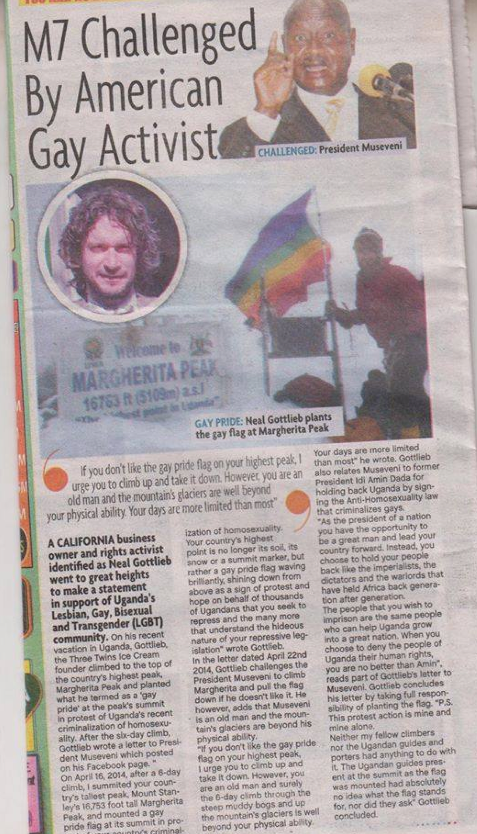 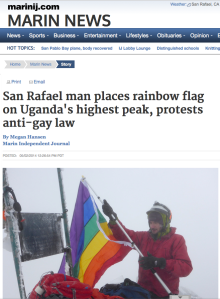