On Saturday a group of 25 LGBTQ activists protested controversial Jamaican Prime Minister Portia Simpson-Miller as she received an honorary degree from Lafayette College in Easton, Pennsylvania. The activists, who chanted “Gay rights Portia!” for two hours, were at one point called “trash” by some Lafayette graduates and were accused of not being real Jamaicans because some protestors were white.

Jason Latty-Travis, President of the Caribbean Alliance for Equality (CAFE) said the group protested the leaders’ negligible record on human rights and justice in Jamaica. “The Jamaican human rights situation could not be worse at this time and it is absolutely false for any honest academic institution to confer a Doctor of Public Service degree on Simpson-Miller,” he said.

Latty-Davis said the school honoring the prime minister for her alleged “commitment and leadership in the areas of human rights, non-discrimination, workers’ rights, and social justice” was repugnant because she has stood by while her government has used the courts to block human rights advances for LGBTQ Jamaicans and others.

When questioned about the honorary degree, James Krivoski, Assistant to Lafayette’s President Alison Byerly, said the college hosted “controversial figures all the time” and that the Jamaican people were free to interpret Lafayette’s support of Simpson-Miller in any way they saw fit. When presented with a list of human rights abuses in Jamaica, Kriovski said the school’s administration did not care about those issues.

LGBTQ Jamaicans are the longstanding victims of violence and discrimination in this deeply religious and conservative country. Between 2009 and 2012, the Jamaican Forum for Lesbians, All-Sexuals, and Gays (J-FLAG), reported 231 incidents of discrimination and violence, including last year’s mob hacking death of transgendered woman Dwayne Jones.  Simpson-Miller’s government has been silent on these crimes and is trying to legally block a citizen’s challenge to Jamaica’s colonial-era anti-buggery law.  Jamaica’s Supreme Court has also refused to hear a lawsuit challenging a decision to reject an ad by the organization AIDS-Free World that promotes tolerance for LGBT people. 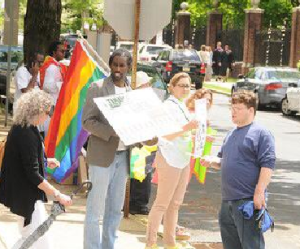 A press release from CAFE said that in 2012 and 2013, the Jamaican police force killed over 500 people in shootouts that eyewitnesses referred to as summary executions.  In 2012, residents of Tivoli Gardens, Kingston, delivered a petition to the prime minister demanding an international inquiry into a 2010 massacre in which security forces killed any where between 75-100 people.  The prime minister never responded to the demand and has refused to turn the matter over to the International Criminal Court.

Threatening the security and future development of Caribbean states are consistent human rights abuses against LGBTQI persons. To address these predicaments, Caribbean Alliance For Equality (CAFE) commits itself to building on the legacy of activists and groups that preceded us in addition to collaborating with existing Caribbean human rights organizations. While finding innovative, creative, and practical ways to change the trajectory of the Caribbean region on LGBTQI issues, CAFE will also always value diplomacy, constructive dialogue, the needs of the youths, education, healthcare, eradicating the stigma of HIV/AIDS, and collaboration with a diversity of non-Caribbean organizations and groups, among other strategies. At the core of our mission, we envision a Caribbean landscape of partnership and equality among all peoples.