This week saw the first national organization come out strongly against the flawed Employment Non-Discrimination Act of 2013 (ENDA) when the National Center for Lesbian Rights (NCLR) Thursday announced it “We strongly oppose any religious exemption in ENDA… we will not continue to support ENDA if it is not changed to be consistent with Title VII’s religious exemption.”

The following morning, the Transgender Law Center (TLC) quickly followed suit with the definitive statement that “at this time we are unable to support ENDA in its current form.”

That’s two of the four legal firms (NCLR + TLC) that issued the “very grave concerns” press release back at ENDA’s introduction in April 2013. It has taken 14 months for them to speak out. While we wait for Lambda Legal and the ACLU to join their press release partners, the Human Rights Campaign (HRC) maddeningly continues their $2M campaign to push that bad bill through the House. Today’s fundraising email from HRC claimed they are “reminded every day of why we must fight harder than ever before. Luckily we have you with us to push LGBT equality forward.” Well no, actually you don’t have all of us onboard! 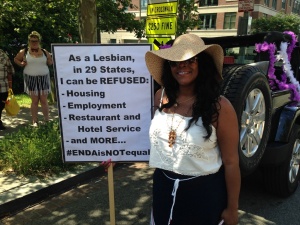 So WHY is HRC trying to set LGBT equality back with religious exemptions that would likely take decades to undo?

With that in mind, we thought we’d take Queer Nation NY’s #ENDAisNOTequal message directly to HRC at the  Capital Pride Parade in Washington D.C… not sure they enjoyed the message, but many others did! And hey Dykes On Bikes – when did the pursuit of civil rights become such a political statement? 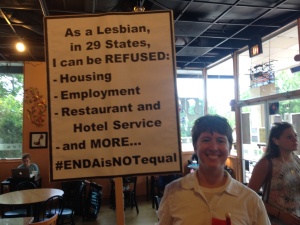 Once the parade got underway, we tried to engage HRC along the route…

Hey! Why are you pushing such a BAD ENDA? Don’t you know #ENDAisNOTequal?

Oh! Why are you pushing us!

After the skirmish with HRC, the CODEPINK, Manning Support Network, and 1AngryOldLesbian.org folks – complete with #ENDAisNOTequal signs – were kindly welcomed into the ACLU contingent to finish out the parade. If HRC is content to continue pushing their bad bill then they need to learn how to answer those of us wanting to know why. Because not only do we know #ENDAisNOTequal but it’s a #DeadENDA. A new comprehensive full civil rights bill, with no exemptions for bigotry, for all of the LGBTQ community, MUST be where our energy and dollars are spent.

With many thanks to Leah Brown and Gael Murphy and of course Queer Nation NY!