About 2 dozen LGBT activists from San Francisco and community members held a vigil outside the San Francisco Human Rights Campaign (HRC) souvenir store in the Castro today. The gathering, which took the form of a sidewalk noon brunch, outside the old Harvey Milk Camera store, was organized in solidarity with the ACT UP New York demonstration taking place this evening at the HRC Gala being held at the Waldorf Astoria. Another solidarity demonstration is expected in Washington D.C. today, at the HRC building.

Though billed publicly as a peaceful protest, HRC had called for a police presence in advance of the protest. When activists arrived, there were already 4 SFPD officers standing  on the street.  Activists unfurled a gigantic rainbow flag and waved signs outside the store,  chanting “BAD BAD HRC,” while curious tourists and community members were offered snacks and an explanation as to why we were there.

The peaceful demonstration continued for an hour. After the demonstrators left a police officer was photographed entering the HRC Store.

“It is our hope that HRC will take note of the myriad of issues and grievances and talk to activists from outside their organization in collaboration on these issues impacting our local and global communities.” (Melanie Nathan to KPFA Radio.)

Several members of the press showed up, including international journalists and TV. We were also interviewed by KPFA radio. We hope that HRC will start to embrace the grass roots by talking to us about the issues that impact us as a community rather than continue to distance itself, in what seems to be a despotic type leadership role. We also hope that HRC will look at how it spends its money and consider how it can impact direct services for LGBT members of our communities.

Activists provided the following reasons for their protest:

HRC touts itself as the preeminent organization in leadership on LGBT issues in the USA and is now also treading into global waters. It should lead authentically, holistically and effectively, as it once did, but that is no longer the case. Instead it is an autocratic organization, which assumes an exclusionary and elitist leadership role. It tricks members of Congress and community into thinking that it represents all our voices, but it does not.

Today we protested in solidarity to support ACT UP NEW YORK, which is protesting at the HRC Gala at the Waldorf Astoria tonight. ACT UP is protesting HRC who they deem soft on HIV/AIDS and the critical issue of Homeless Queer Youth.

They are protesting the fund raising gala that excludes the majority of HRC members who cannot afford to be there because of the high priced tickets, showing an elite bias. While HRC takes most of its money from the 99% through huge national and global membership, it applauds and congratulates only the 1%,  while further ignoring many of the needs of the 99%. 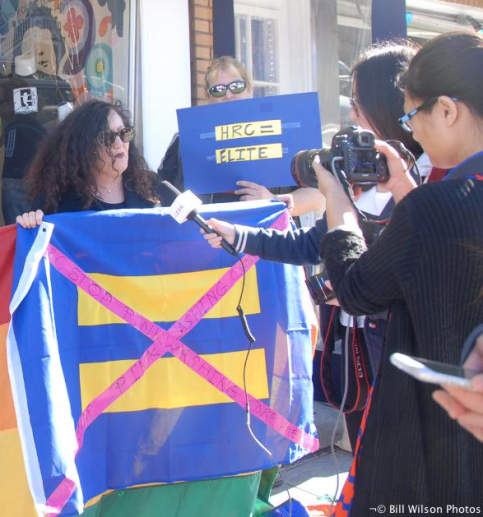 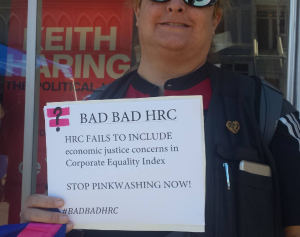 HRC PINKWASHING:  HRC runs a Corporate Equality Index, rating US workplaces based on equality hiring. This serves only to PINKWASH the grievances we have with some of the corporations pertaining to social and environmental issues.

HRC notes the importance of businesses understanding and honoring the issues important to LGBTI people. They provide an Equality Score Index , which LGBT people can look at to see who we should support with our buying power. They say on their website “these issues range from LGBT inclusiveness to environmental protection.

Corporate social responsibility has become an imperative for a successful business.” Yet they give high scores to certain corporations which have terrible environmental records and who are not praiseworthy because of other issues. This means HRC is using the LGBT positive aspects to ‘Pinkwash’ the company. To provide a high score to a corporation that is bad on the environment, compromises who we are as an equality and human rights conscious community. Just because they have a fair diversity hiring policy, does not mean we should elevate a company that is bad on other issues. 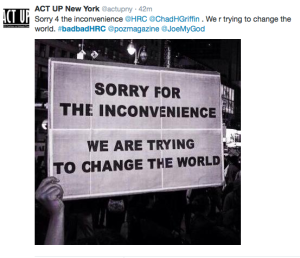 HRC notes: “In the 2015 CEI report, 366 major businesses — spanning nearly every industry and geography — earned a top score of 100 percent and the distinction of “Best Places to Work for LGBT Equality.” The Report is merely a survey to employers – and is based on Employers self ratings. Its results serve to elevate businesses which may not deserve such praise on many issues that concern us, not only as a LGBT community, but also as a community concerned with the well being of all Americans and the world at large.

Case in point General Electric gets a 100% score. GE has recently been sued and either guilty or settled for age, race and sex discrimination.

ENDA: and religious Bigotry: HRC claims the 2013 Senate passage of ENDA is a victory. It is not. Accepting and praising religious bigotry is never a victory. This has misled the US LGBT community for 2 years now. HRC was last at the table to reconsider ditching its support for an ENDA that is fraught with religious exemptions that are prejudicial to the LGBT community. 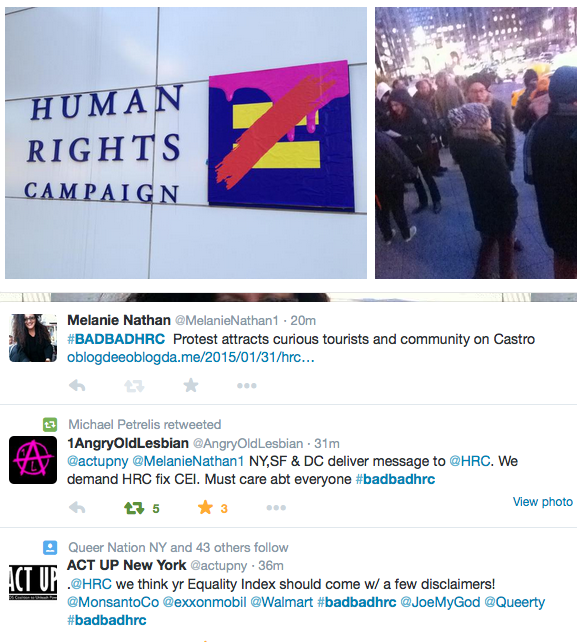 HERE IS THE D.C. ACTION in a trilogy of protests against HRC
http://oblogdeeoblogda.me/2015/01/31/solidarity-with-act-up-at-human-rights-campaign-d-c-hq/ 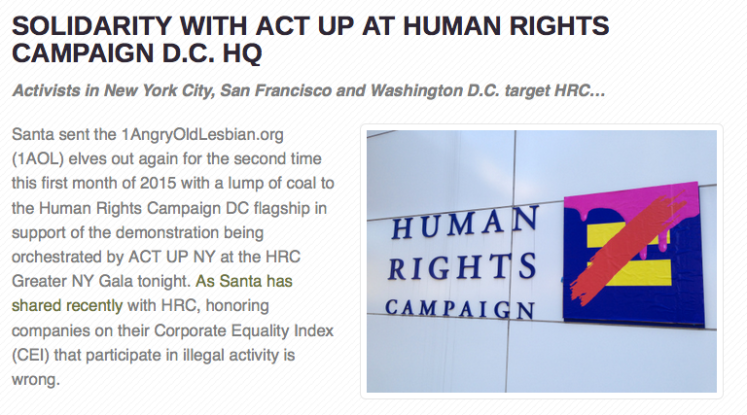 NEW PICS FROM NYC ACT UP 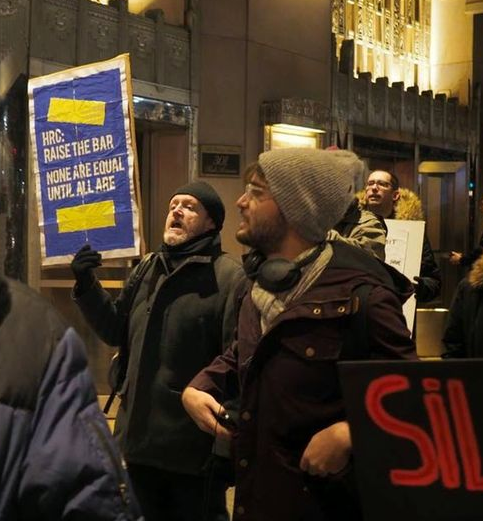 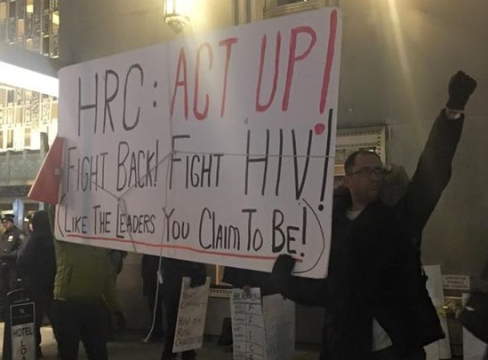 …and the letter from Santa tells Chad why! Santa Claus asked the members of 1AngryOldLesbian.org (1AOL) if they wouldn’t mind delivering a letter to the Human Rights Campaign (HRC), and they merrily agreed. Though the weather outside was frightful, their spirits were high as they donned their rainbow Santa hats while listening to the mood setting Perry Como’s “Santa […]

While asking the community to demand no less than full federal equality… By Cathy Kristofferson, June 8, 2014 This week saw the first national organization come out strongly against the flawed Employment Non-Discrimination Act of 2013 (ENDA) when the National Center for Lesbian Rights (NCLR) Thursday announced it “We strongly oppose any religious exemption in ENDA… we will […]

#ENDAIsNOTequal #DeadENDA #ENDENDA #WTFHRC By Melanie Nathan, June 05, 2014. Washington Blade is reporting that The National Center for Lesbian Rights (NCLR)  announced today that it does not support the current version of the Employment Non-Discrimination Act pending before Congress because of the bill’s religious exemption. A schism has developed amongst activists with grassroots pitted […]