Last week, the Human Rights Campaign (HRC) announced a $2 million campaign to push for the House Vote on the Employment Non-Discrimination Act of 2013 (ENDA). This campaign partnership with Americans for Workplace Opportunity (AWO) is similar to the $2.5 one announced last July 31st to push for the Senate vote.

Working closely with GOP donors, HRC seems content to codify legalized discrimination through the existing broad religious exemptions contained in the 2013 ENDA version passed by the Senate last fall. Organizations and individuals including Julian Bond and the ACLU have expressed grave concerns about these religious exemptions. They cannot go unchallenged.

“During consideration of the landmark Civil Rights Act in 1964 (and again in 1972), there were attempts to provide religious organizations with a blank check to engage in discrimination in hiring on the basis of race, sex and national origin — like the one now proposed for ENDA — and both times we said no to those efforts. We shouldn’t accept only partial equality for LGBT people.” – Julian Bond, NAACP chairman emeritus

“The Employment Non-Discrimination Act (ENDA), which finally passed in the Senate late last year, is a throwback to the 1990s, when ENDA was first introduced; the bill wasn’t updated to the times we live in. It exempts businesses owned by religious groups.” – Michelangelo Signorile, Radio host and HuffPo Gay Voices Editor-at-large

“While we applaud the progress that has been made, we stand united in expressing very grave concerns with the religious exemption in ENDA. This sweeping, unprecedented exemption undermines the core goal of ENDA by leaving too many jobs, and LGBT workers, outside the scope of its protections.” – American Civil Liberties Union, Lambda Legal, National Center for Lesbian Rights, and Transgender Law Center

Today’s film screening and discussion with Lesbian Avenger Kelly Cogswell, at HRC D.C. headquarters, provided a perfect backdrop to express concerns about the broad religious exemptions. The Lesbian Avengers were a direct action group out of NYC in the 1990s fighting for lesbian survival and visibility. The acknowledgments in her memoir “Eating Fire: My Life as a Lesbian Avenger” includes:

“My biggest thanks go to those joyful troublemakers and unapologetically big-mouthed dykes the lesbian avengers. This book is for you.”

D.C wanted to welcome Kelly with some joyful troublemaking of our own!

Panels were displayed on the wall of the HRC building highlighting the problems with the broad religious exemptions within ENDA 2013 through quotes from prominent people and organizations.  In addition, a Call To Action was displayed for all coming to the Cogswell event to see. 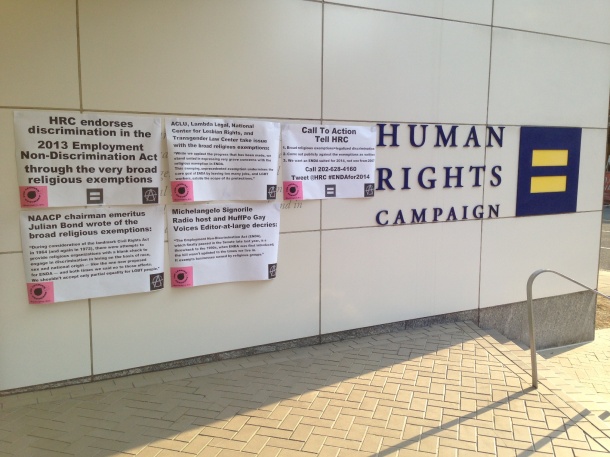 Until HRC staff rushed out to take them down…

…and HRC General Counsel Rob Falk came out to make sure the demonstration and activist were removed from the premises:

As we have reported on OBLOGDEE here and here, the broad religious exemptions contained in ENDA 2013 do not reflect or mirror the religious exemptions contained in the 1964 Civil Right’s Act, no matter how many times Tico Almeida of Freedom To Work says it.  Those exemptions were put in place to protect churches and other religious institutions from having to hire religious leaders of a different faith.  The 1964 Civil Rights Act exemptions had nothing to do with “protecting” a religious-affiliated hospital from having to hire an African American gardener, so ENDA 2013 shouldn’t allow a religious-affiliated bookstore to be able to fire a cashier perceived to be gay.

HRC’s AWO is fine with throwing employees of religious-affiliated employers under the bus, just as they were happy to support ENDA 2007, which did not provide the transgender community with employment protections because they felt that was the only way to get the bill passed then.  We support passage of the Do we really want to throw others under the bus now for the sake of passing a bill?

“You want to feel powerful there’s no better was than going out there and demanding stuff [sic] toot sweet. – Kelly Cogswell”

Time for everyone to feel powerful. Please answer the call to action below, demand HRC come out against the broad religious exemptions contained in the bill they are pushing towards a vote!

2. Come out publicly against the exemptions as written

Here is the flyer for the campaign. Please share widely! 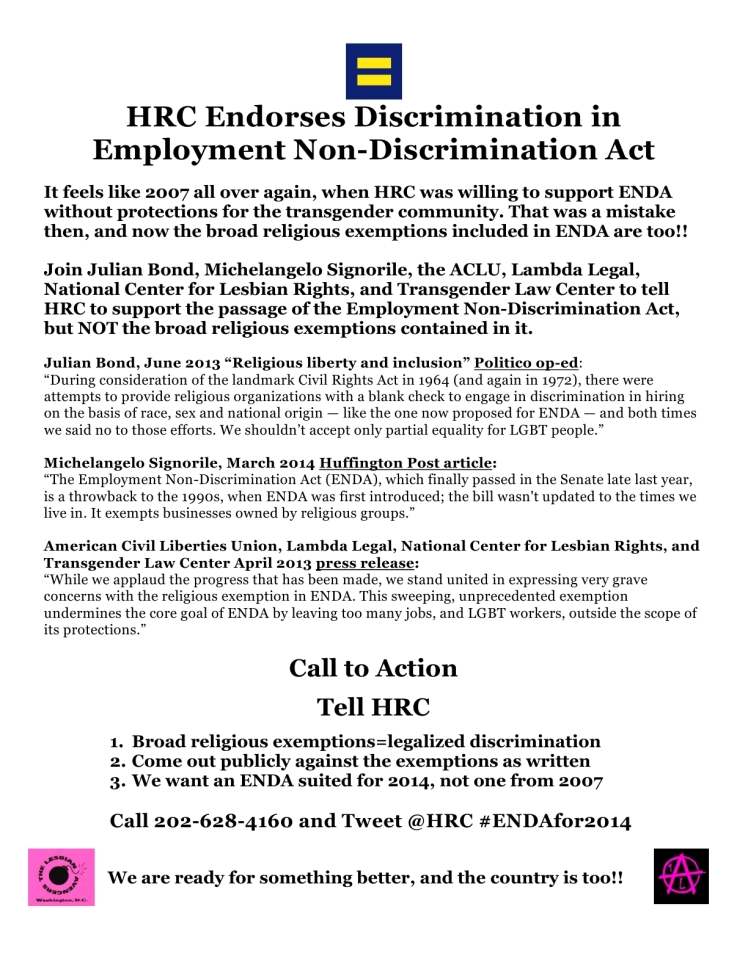