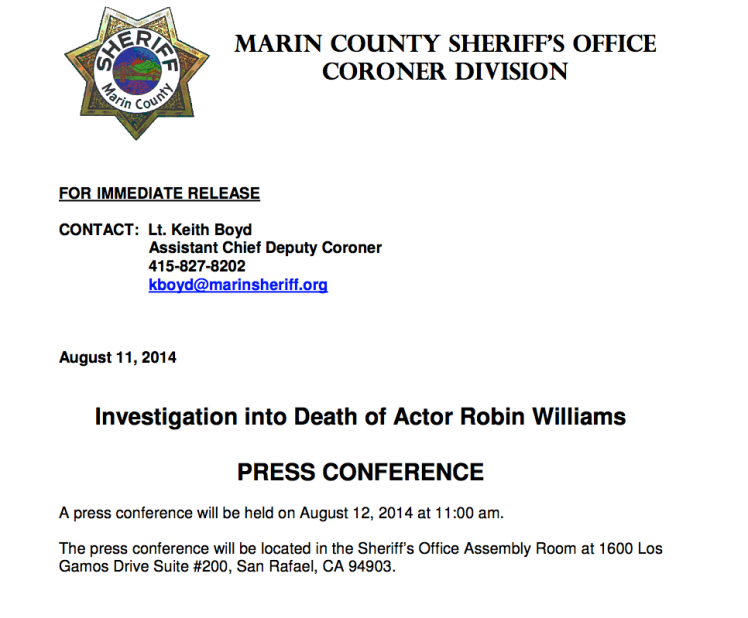 Sad to report this news as released by the  Marin County Sheriff’s Office today here in my neighborhood.

Comedian Robin Williams was found dead, here in Marin, from a likely suicide. He was apparently found at his residence in unincorporated Tiburon, just across from the Golden Gate Bridge. Its so weird such a warm normal beautiful day.  One can only imagine the pain he was going though.

According to a press release, shortly before 12 p.m., Marin County Communications received a 9-1-1 phone call reporting a male adult had been located unconscious and not breathing inside his residence in unincorporated Tiburon, CA. The 63-year-old, Robin McLaurin Williams, was pronounced dead at the residence.

The Sheriff’s Office, along with the Tiburon Fire Department and Southern Marin Fire Protection District, were dispatched to the incident. Emergency personnel arriving on scene at 12:00 pm.

The Sheriff’s Office Coroner Division stated in the press release that they suspected the death to be a suicide due to asphyxia, but a comprehensive investigation is still to be concluded.

“A source close to the investigation told KTVU that Williams hanged himself.

The comedian and actor, who won an Oscar for his supporting role in Good Will Hunting and has starred in such films as Night at the Museum, Mrs. Doubtfire, Good Morning, Vietnam and Dead Poets Society got his start as a comedian in the fertile stand-up scene in San Francisco during the 1970s.

He was also a cast member on the short-lived Richard Pryor Show in 1977, Williams was cast to play an alien on Happy Days, eventually leading to his own spinoff series Mork & Mindy which aired between 1978 and 1982.”

An investigation into the cause of the death is currently underway by the Investigations and Coroner Divisions of the Sheriff’s Office.

A forensic examination is currently scheduled for August 12, 2014 with  toxicology testing to be conducted. The Coronor will be holding a Press conference tomorrow.

We would often see Robin Williams on his bike or walking around some areas here in Marin. What is great about Marin for celebrities is it is a quiet existence with very little papparrazzi and gossip.  May he rest in peace with condolences to his family.