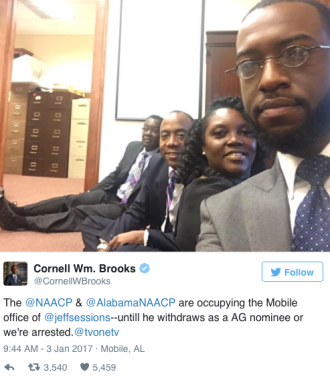 ” Withdraw or arrest us,” is the message the NAACP is sending to Senator Jeff Sessions, as they stage a sit-in at the Senator’s  Alabama office, to demand his withdrawal as the Donald Trump nominee for U.S. Attorney General.

And aptly so: Sessions is a known racist whose history of bigotry proves that the is absolutely incapable of representing all Americans as the head of Department of Justice.

The protesters say they will stay until Sessions is no longer the nominee or they are arrested.

“We are asking the senator to withdraw his name for consideration as attorney general or for the president-elect, Donald Trump, to withdraw the nomination,” NAACP President Cornell William Brooks said Tuesday afternoon from Sessions’ office.

Alabama NAACP President Benard Simelton said he and 15-20 others are there “conducting business as usual” and will remain until “Sessions meets our demands or the arrest — whichever he chooses.”  Sessions was nominated in November.

READ MORE ABOUT WHY WE AT OBLOGDEE are horrified by this nomination and fully support extensive protests to ensure the Sessions’ nomination does not see the light of day!

UPDATED 7.40 PM:
FIRST A PRAYER AND THEN THEY WERE ARRESTED:

Shame on you Jeff Sessions- !!!!  Lest we forget these words:
“Mr. Sessions is a throwback to a shameful era that we thought was in the past.  Inconceivable to me that a person of this attitude could be a Judge or even a US attorney.” Senator Ted Kennedy: 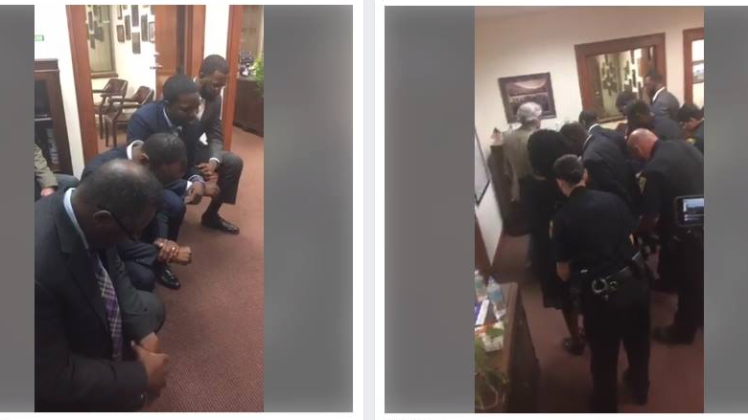