You are here: Home » Bristol Palin Tells Obama how to be Dad on Gay Marriage Issue 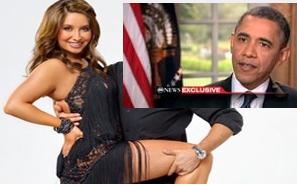 While I resist giving Bristol Palin the time of day, I would note that she is part of the right wing anti-Obama spin machine and so when she saw fit to pick the President out with her view of his parenting – well it was hard to resist this response.

President Obama noted that his daughters have friends who have same-sex parents and he referred to how this had impacted his own evolution on the issue when he came out in support of marriage equality yesterday.

“There have been times where Michelle and I have been sitting around the dinner table, and we’re talking about their friends and their parents, and Malia and Sasha, it wouldn’t dawn on them that somehow their friends’ parents would be treated differently. It doesn’t make sense to them and, frankly, that’s the kind of thing that prompts a change in perspective.”

“While it’s great to listen to your kids’ ideas, there’s also a time when dads simply need to be dads. In this case, it would’ve been helpful for him to explain to Malia and Sasha that while her friends parents are no doubt lovely people, that’s not a reason to change thousands of years of thinking about marriage. Or that – as great as her friends may be – we know that in general kids do better growing up in a mother/father home. Ideally, fathers help shape their kids’ worldview.”

Yes Bristol Palin – your father did such a great job of shaping your life that you succumbed to abstinence – you are indeed a role model and you have absolute authority to tell the President how to be dad! But I guess your dad was being a perfect dad.

Bristol Palin is wrong in her summation that President Obama ought not be shaped in his evolution by his children’s experience – while taking cognizance of their reality.  The  fact that his children are living in a real world where gay families are a fact. Same-sex couples are a reality that cannot go away with the wave of a magic Palin wand – nor with the flip of a Tea Party finger. Hence noting the de facto existence of these families, through the real life experience of his daughters, Obama has taught his daughters true American values and shown real leadership with the expression of the ideal of equality.

Way to go Barack Obama, the dad and the President!

Editor’s Side Note: Bristol Palin’s remark “we know that in general kids do better growing up in a mother/father home. Ideally, fathers help shape their kids’ worldview”  is flatly untrue and not based on fact. To the contrary the opposite has been proven in studies and reports.

After I posted the above picture on Bristol’s FB Page I believe she deleted it… and blocked me from commenting. However I noticed that many of her own fans reprimanded her for her Obama judgment via her comments. Here are some screen shots from Bristol Palin’s FB page