You are here: Home » Celebrating the Launch of Nelson Mandela HIV/AIDS Medallions in the United States 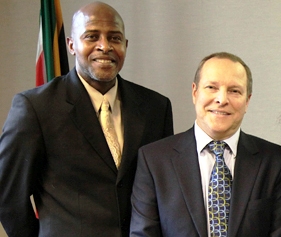 This week, in conjunction with a launch event hosted by The South African Consul General in New York, the South African Gold Coin Exchange  (SAGCE) introduced the first ever Nelson Mandela gold and silver Medallions into the United States Market.

The special release, launched to commemorate the AIDS 2012 conference in Washington D.C. last month, notably “The Red Ribbon Box Set,” was designed by the SAGCE to promote the living legacy of one of the most influential icons in the world, former South African President Nelson Mandela, to raise HIV/AIDS awareness and to provide corporate beneficent funding to The Nelson Mandela Foundation, The Nobel Institute and three United States based charities, soon to be announced.

The Program included an inspiring welcome by the Consul General, who noted the importance of the image of Madiba, Nelson Mandela.

Acknowledging the theme of AIDS 2012, “Turning the Tide Together,”  and the crucial timing, where there is a global commitment to change the course of the epidemic, the need for funding and the extraordinary legacy tie to Mandela, speakers reported passionately about their work. They included Sophie Delauney, the Executive Director for the United States Chapter of Doctors Without Borders, and Charlie Banar, Policy Director for The Black AIDS Institute.

The highlight of the event was hearing from the Chairman of the SAGCE, Alan Demby, an entrepreneur and visionary who brought the image of Mandela to collectible coins in South Africa and the United Kingdom, through the world’s first and only coin collector store chain, The Scoin Shop, generating millions of dollars already distributed to the Mandela Foundation and Nobel  Institute.

The invited guests, an eclectic mix of NGO directors, HIV/AIDS activists, coin dealers, local professionals, journalists, as well as members of the South African Mission to the United Nations , were treated to South African food, wine,  and music by renowned South African musician Wouter Kellerman and his group, on tour in the U.S. and hot off The Kennedy Center’s stage.

For the first time, the U.S. public now has an opportunity to participate in the series of collectibles, which caters to a fresh new brand of collector. Having this set  is like “holding history in your hands” noted Demby, who to date has generously distributed 200,000 free silver and gold plated token coins, depicting Mandela’s image.

The South African Gold Coin Exchange (SAGCE) and The Scoin Shop (Scoin) has the worldwide rights to distribute the Mandela and Nobel Peace Prize Laureate images on medallions.  The 2,500 limited edition two piece set, consisting of a half ounce gold and one ounce silver, depicts Nobel Prize recipient and former South African President Nelson Mandela’s image on the obverse and the AIDs ribbon on the reverse, together with his renowned quote: “AIDS is no longer a disease, it’s a human rights issue.”

The Box set can be purchased by contacting for further information.