You are here: Home » The critical intent of the person behind the Porterville Proclamation 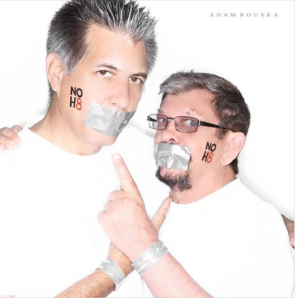 Brock Neeley (Pictured right) and his husband were the first same-sex male couple to marry in Tulare County, and Neeley was the person who first approached the Mayor of Porterville, Mayor Virginia Gurolla, to ask for a proclamation recognizing June as LGBT Pride Month in Porterville. This article explains its importance and hammers home the impact of its rescission.

The Mayor agreed  with Neeley,  in the face of vehement opposition by City Council members, and signed the proclamation. Instead of embracing the Proclamation and looking at the reasoning for its value, the City Council forced Porterville into an unprecedented battle, helmed by hateful rhetoric, that brought disappointment and shame to the small California Central Valley gateway, and may well have served to exacerbate an underlying problem, suicide.

The LGBT community in Porterville and its surrounding towns have been hard hit by the battle that should never have been. Here is a letter to the Editor of the Porterville Recorder, that has yet to be published, by Brock Neeley speaking to his motivation for requesting the Porterville Proclamation and it elucidates just how thoughtless and negligent the rescission was on the part of the City Council members who voted for it.

Here is the question never asked to date: “What was my intent in requesting the LGBT Pride Month Proclamation?”

My intent was to raise awareness to an “At Risk” sector of the population. That awareness is to allow them to know there “IS” a LGBT Community here in Porterville that they can reach out to. I feel this awareness is just as important as the “Step Up” program that Councilman Ward thinks is so vital to reach out to another “At Risk” sector. I agree with Ward that there is a Bullying and Suicide problem with all sectors of the population, but when you have a sector with elevated rates you should also do outreach to that sector to intervene whenever possible. Since we can not count on PUSD to offer any assistance in this endeavor, the LGBT Community has to do the work themselves. For those who brought up their fake science statistics, (Family Research Council, American Family Association. . . . .etc), Here is some “CREDIBLE” Information

If at risk, or if you know someone at risk, or need help or guidance or counseling on the issue of suicide please contact:

The National Suicide Prevention Lifeline at If you are in crisis call 1-800-273-TALK (8255) or http://www.suicidepreventionlifeline.org/getinvolved/locator

For LGBT and Youth – The Trevor Project: If you need support, please call the Trevor Lifeline at 1-866-488-7386 to speak with a trained volunteer counselor. http://www.thetrevorproject.org/warningsigns