Uganda pride 2012.*1
Photos by David Robinson© 2012, c/o Melanie Nathan for  use by The Advocate with this article only. All Rights Reserved. SMUG and FARUG of Uganda have approved use of images contained herein.

Just last year at this exact time, the world was astounded as the first Ugandan Pride Parade emerged after months of secret planning.  The Ugandan LGBTI community defied the odds by launching their first ever LGBTI Pride parade.  A photo of the decorated truck leading equally decorated marchers to the celebration,  was seen as an act of hope, pride and defiance. (Right)

I received the sought after photos from Uganda and had to first secure special permission around safety issues from the Ugandan activists to write and publish, and sent them with an article to The Advocate.*1

The world was amazed at the events depicted in the article and pictures received record breaking attention.   When the event was disrupted by authorities and participants were detained on instruction of an over zealous Minister of Ethics, Fr. Simon Lokodo, under a non existing law, the organizers of Beach Pride Uganda, said in defiance, we will be back next year and so they were.

Just last week, Uganda celebrated its second annual Gay pride festival with numerous events and activities, after much preparation and months of fundraising and guarded activities.

We have received unconfirmed reports that this time although police were present at the main Pride Parade and festival  it seemed their role was to provide safety and security rather than the unlawful arrests of gays which is what occurred last year.

For all accounts the Ugandan second annual Gay pride went very well. There were no incidents and people had a great time, noting in social media its absolute success.As depicted In the first picture below, Ugandan Pride participants stand in solidarity with the oppressed Russian LGBT community through new Russian propaganda laws.  The Ugandan government has yet to pass the Anti-Homosexuality Bill which is still languishing in Parliament, and if passed will include, amongst other onerous provisions, so called “propaganda provisions. 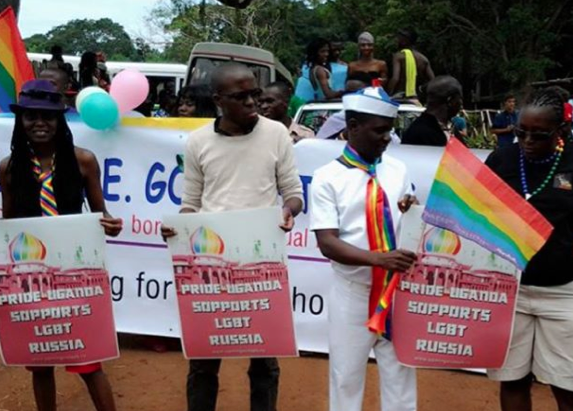 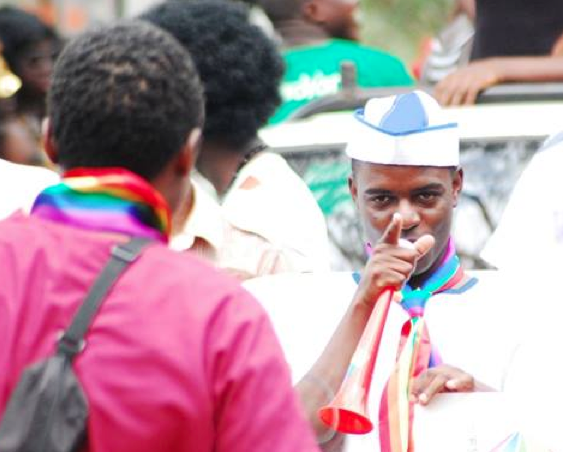 Having Fun at pride

My LAST YEAR’s Article published in The Advocate read:

“While the Anti-Homosexuality Bill from David Bahati languishes in Uganda’s Parliament, LGBT activists dared to declare their pride in public events this weekend.

After months of preparation, and despite arrests, Uganda’s gay community concluded all its planned Pride events, including a beach parade, parties and a film festival. All were well attended by a courageous LGBTI community, considering that Uganda is a country that criminalizes homosexual sex acts and seeks legislation to kill its gays for “aggravated homosexuality” with long prison terms for so-called “promotion of homosexuality.”

Adding to the country’s antigay climate, the Ugandan Minister of Ethics and Integrity Simon Lokodo faces a court clash with gay rights activists for breaking up a legal meeting at a private hotel resort in Entebbe earlier this year. And the government of Uganda was recently embarrassed by unwarranted arrests of foreign visitors at a meeting held at a private resort to discuss human rights issues.

The international community has shown its support for sexual orientation as a human right with examples such as  United States Secretary of State Hillary Clinton’s visit to Uganda this past week, when she paid tribute and gave an award to a coalition of human rights defenders for their LGBT advocacy.

The importance of this Pride event cannot be understated. The fact that these brave activists could pull this off in this milieu of persecution is a great victory for the community. Visibility like this notes the ongoing legacy of late activist David Kato, it defies the export of American Evangelical hate, and it helps ensure defeat of the Bahati Bill. It shows leadership for all of Africa, and above all it shows that the LGBT people of Uganda simply refuse to give up their right to exist and to live their natural born sexual orientation.

So in the words of world renowned, award-winning gay activist, Frank Mugisha who proudly attended the weekend Pride: “We did not have a chance to thank the pride organizers, the entire committee and the grand marshal. Thumbs up to you all who made this happen. Next time we begin the march from the police station.”

See photos of activists bravely attending Uganda’s Pride events on the following pages. All images are courtesy of Pride organizers and those who appear in the photos have given permission.“

Looking forward to the third annual Ugandan pride festival next year, by which time we hope the ever-looming Anti-homosexual Bill will no longer be a threat.