You are here: Home » Stand up now against the ENDA Exemptions

Stand up now against the ENDA Exemptions

LGBT Americans deserve full equality and yet we grapple for an unworthy ENDA?

ENDA as it stands, introduced with exemptions in Congress, is unacceptable. That is what we have been saying here on OBLOGDEE, as certain exemptions make it unworthy of passage. That is our position. ENDA’s lack of worthiness in its current form also makes the case for why we need legislation that embraces full equality.  A benchmark a unified LGBT community has yet to set. Are you not sick of exclusion? Why would we support a Bill that gives with the one hand and takes away with the other? Why would we support anything short of what LGBT people need to be protected in workplace. Now, before ENDA goes any further read this e-mail which I received from GETEQUAL today and please participate in having your voice heard:- 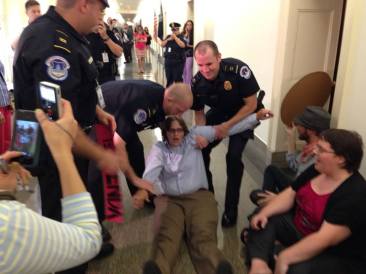 GETEQUAL is alerting supporters to this imperative action:

Every night, millions of LGBTQ workers go to sleep not knowing if they’ll have a job the next day.

There is currently no federal law protecting LGBTQ workers from discrimination on the job, and GetEQUAL has been advocating for such a law since we launched in 2010. Even this year, we’ve been pushing hard for Congress to pass the Employment Non-Discrimination Act (ENDA) to ensure that LGBTQ workers are able to focus on their work, rather than on hiding who they are or who they love.

But the version of ENDA that is being considered by the House and Senate right now won’t actually allow *all* LGBTQ Americans to be who they are in the workplace. Because of very broad religious exemptions in the bill, religiously-affiliated institutions — including schools, hospitals, and universities — can continue discriminating under the guise of “religious liberty.”

Click here to tell our allies in the Senate to stand up against these exemptions!

Senators Kirsten Gillibrand (NY), Sherrod Brown (OH), Al Franken (MN), and Elizabeth Warren (MA) have been great allies to our community. They have stood with us before, and are committed to progressive change. We are deeply grateful for what they have done so far, and we need them to step up again on the Senate floor to educate their colleagues about the serious threat that these broad religious exemptions pose to the LGBTQ community.

Just last week, a teacher at a Catholic school in Arkansas was fired after she and her same-sex partner married in another state. Unfortunately, the version of ENDA that’s being advocated for right now likely would have offered her no protections in the workplace. The same is true for Carla Hale — fired from her job in a Catholic school in Ohio after mentioning her same-sex partner in her mother’s obituary.

Add your voice to the call for progressive champions to speak out against broad religious exemptions!

As I mentioned in an op-ed at the Huffington Post [1], we know how this story ends because we’ve seen it happen with our allies in the reproductive justice movement, who are facing dozens of court battles right now because of these same types of asterisks and fine-print. We deserve more than “asterisk equality” — and we shouldn’t leave anyone behind.

We need progressive champions in the Senate to stand up with us and to speak out against these exemptions. Many religiously-affiliated hospitals or schools are the only option for LGBTQ folks in rural places — so there isn’t an option to “just find another job” or “work somewhere that wants you.” In fact, these exemptions roll back many of the rights and protections that we’ve fought hard to secure — and we need progressive champions to speak truth to power on the Senate floor.

Click here to tell our allies in the Senate to stand up against these exemptions!

Imagine losing your mother, then losing your job. Imagine getting married, and the first call you get after the best day of your life is your boss firing you. These stories are all too common, and we don’t believe we should settle for a bill that leaves some members of our community behind. We’ve worked hard to get where we are, and we need your help to get our allies to stand up for a *good* bill — a bill we’ll be proud of and a bill we deserve!

Power concedes nothing without demand,

The Employment Non-Discrimination Act, or ENDA, was introduced again in Congress this year — if passed, it would make sure that no one can legally be discriminated against in the workplace for being gay or transgender. By Melanie Nathan, September 05, 2013. We all know we have a Congress that will not work with this […]

By Cathy Kristofferson, July 10, 2013 Today in a wham bam no discussion just majority and minority opening statements hearing, Senate Bill 815, the Employment Non-Discrimination Act (ENDA) was passed out of the U.S. Senate Committee on Health, Education, Labor, & Pensions (HELP) in a 15-7 vote. All Democrats voted in favor joined by 3 Republicans – […]

“Religious liberty, contrary to what opponents of racial equality argued then and LGBT equality argue now, is not a license to use religion to discriminate.” By Cathy Kristofferson, June 14, 2013 Back in April when the 2013 version of the Employment Non-Discrimination Act (ENDA) was introduced into Congress we posted here and here on OBLOGDEE […]

by Melanie Nathan on June 13, 2013 By Melanie Nathan, June 13, 2013. Today eight members of the group Get Equal were arrested while protesting outside speaker Boehner’s office, calling attention to the House’s failure to pursue ENDA, the legislation that would end work place discrimination against LGBT people in America. The protestors were demanding that the speaker hold a floor vote […]

The Special Rights Battleground of ENDA and Immigration Reform

by Cathy Kristofferson on May 2, 2013 Seems to be exactly where the Religious Right is digging in these days. By Cathy Kristofferson, May 02, 2013. Two legislative initiatives now underway on Capital Hill greatly underscore the fact that it is the Religious Right who is seeking ‘special rights’ not the LGBT community, as we are so often accused.  The Comprehensive Immigration […]

By Cathy Kristofferson, April 29, 2013 Here on this BLOG Thursday, we reported that directly preceding the introduction of the Employment Non-Discrimination Act (ENDA) of 2013, a press release came out expressing “very grave concerns” about the religious exemption clause contained in the Bill. The American Civil Liberties Union, Lambda Legal, the National Center for […]