You are here: Home » Russian Consul Lambasted for anti-gay laws by Seattle Mayor and City Council

An unanimous City Council of Seattle sent a letter to Russian Consul General, Andry Yushmanov joining Mayor Mike McGinn in condemning Russia’s anti-gay laws, inviting the Russian Consul to attend a forum to explain his position, saying “Let there be no mistake, Seattle condemns any form of discrimination, any kind of marginalization, any kind of human rights violations against lesbian, gay, bisexual and transgender people.”

The Mayor then lambasts the anti-gay Russian laws.

This was in response to a letter sent by the Russian Consul to the Mayor complaining about the demonstrations which activists staged outside the Russian consulate in protest of the Russian anti-LGBT laws. The Russian Consul seemed to be of the opinion that the Russian law had been wrongly portrayed. The Mayor, disagreed with the Consul noting that “Tolerance of the homosexuality means affording the same rights to LGBT citizens that other citizens enjoy. The laws recently signed by your president, Vladimir Putin, are intolerant.”

The Mayor goes on to challenge the merits of the law itself, noting that the very idea that there can be such a thing as propaganda about being gay to children, marginalizes and hurts gays to the point of violence.

The Mayor does not mince his words:

Now the entire City Council has stood together with the Mayor, to uphold the position that Russia’s so called anti-propaganda laws are in fact discriminatory and harmful to LGBT Russians, thereby stigmatizing Russia’s standing in the international community. 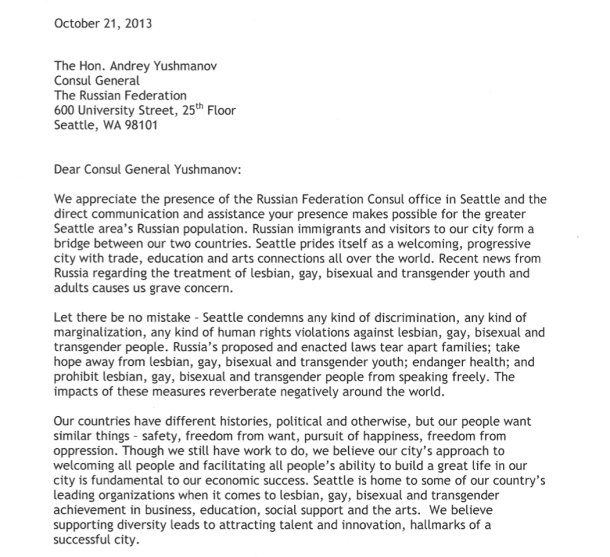 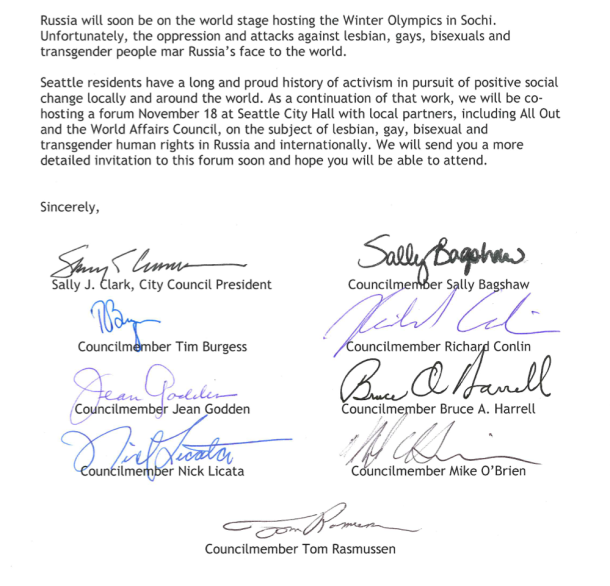