A Wake up call to funders and others such as The Catholic Church which supports this organization through memberships, grants or donations. 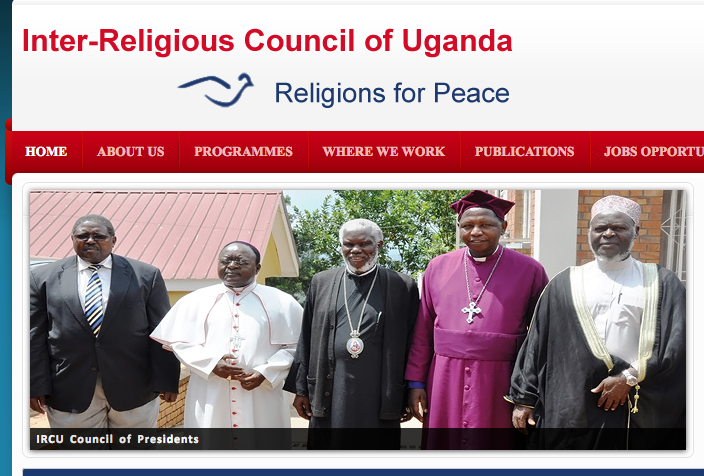 The Christian group, Inter-Religious Council of Uganda has admitted on the record to its direct participation in the Anti-Homosexuality Act (AHA) of Uganda, by asking to be joined in a legal action to protect the AHA from a ruling of unconstitutionality. Below is a copy of the application. The Christian groups are trying a last ditch effort to thwart a possible court ruling that the Anti-gay Bill is unconstitutional, which may be made as early as tomorrow. This could delay the ruling.

The group together with other anti-gay groups of Uganda have asked to be joined as Respondents to defend the action that is seeking to rule the Ugandan Anti-Homosexuality Act as unconstitutional. 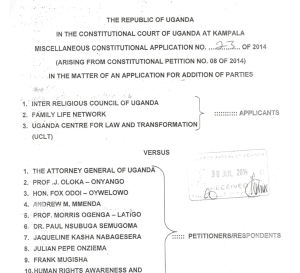 The Constitutional Court is tomorrow (Friday) expected to deliver its ruling on whether the Speaker of Parliament Rebecca Kadaga was correct to pass the Anti-homosexuality Bill without the proper Parliamentary quorum. The ruling could technically dispose of the 5-months court case, that is if the court agrees with the arguments of the lawyers representing human rights defender Plaintiffs, that indeed there was no quorum when the Speaker of Parliament passed the Bill on December 20 last year. However, should court rule that there was no evidence presented by  Plaintiffs to prove that there was no quorum, then the court will have to rule on the other arguments involved in the case to determine whether or not the Act is constitutional.

The 10 petitioners — including two Ugandan rights organizations — also claim that the law violates the constitutional right to privacy and dignity, as well as the right to be free from discrimination, and cruel, inhuman and degrading treatment. The latter issues will be decided if the ACt survives this first issue of a quorum.

Inter-Religious Council of Uganda has now made the critical admission about its involvement in the anti-gay legislation, which could have far reaching implication for all involved in the IRC – both in Uganda and abroad.The organization noted in the Application to be joined: “The Applicants efforts were key to the passing of the legislation…” 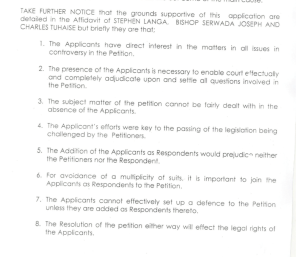 All affiliated international churches and funders must now wake up to the fact that they have in effect been sponsoring the organization’s war against Uganda’s gays, and in hence the world’s gays.  This is now clearly admitted on the record. The nature of the anti-gay rhetoric and direct involvement, as now admitted, serves as a wake up call to all Churches  that support IRC from abroad.  These churches must all now take responsibility that they in effect have supported legislation that called for the death penalty for gays. (Even though the death penalty has now been removed from the Bill.) These Churches must now take responsibility – that unless they pull their support from IRC, they are on the record currently supporting life in prison for gays.

It is now time for us to take a hard look at who has in the past funded and supported IRC of Uganda and who continues to do so and to remind them that they are supporting an organization now admitting its participation in a law that is not only designed to persecute but that has in fact served to prosecute a minority portion of Uganda’s population.

IRCU MEMBERSHIP IS COMPRISED OF: 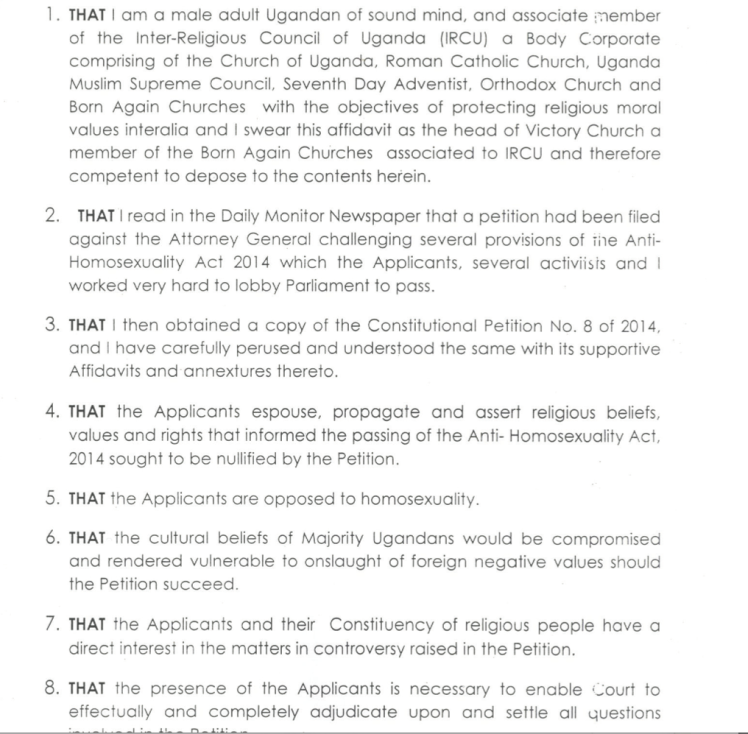 HERE ARE THEIR GOALS AND OBJECTIVES as displayed on their website – and it is clear that anyone supporting their mission may well now assert that they have been deceived into thinking that their stance on human rights includes ALL God’s children. It is a great shame because it seems that the IRC may well do some excellent work. However ythey have revealed their hand to include hate against LGBT community, by supporting a law criminalizing good people, with life in prison:

“IRCU PHILOSOPHY
Inspired and motivated by love and faith, IRCU strives to serve God through service to humanity, especially the poor and vulnerable of society. ( Surat Al-Insaan 76:7-9, Mathew 25:34-40, 1 john 4:20) 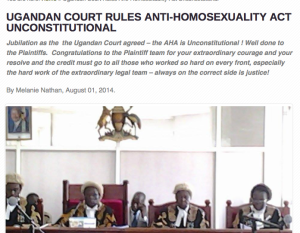 CATHOLIC CHURCH MESSAGE IN UGANDA –  blessings to all Christians who have been working so hard to make Jinja a land free of gay persons by Melanie Nathan, April 20, 2014. The Bishop of the Jinja Diocese of the Catholic Church, Bishop Rt. Rev. Fr. Charles Wamika, in today’s Easter Message  delivered at St. Chalres […]