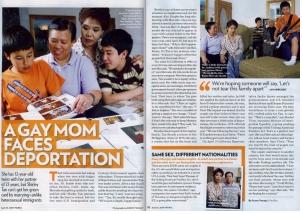 Andrew Harmon at the Advocate reports that The Obama Administration held talks with LGBT groups on January 30, and the “big ask” was rejected.  “While the administration has taken affirmative steps in recent months to ensure that foreign nationals married to American spouses of the same sex are spared from actual deportation, officials told LGBT rights groups in a recent, high-level meeting that they will not hold such marriage-based green card petitions in abeyance.”

The Advocate article notes,  “The decision is being criticized by some advocates as a campaign-year calculation based on politics, not on sound legal analysis.”

I disagree with that notion as I believe Obama administration had no basis upon which to grant the request and that the organizations involved, with Immigration Equality at the helm, have failed binational same-sex couples and proposed this inane measure as a cover up for their own foul play!

What did the LGBT groups, with Immigration Equality at the helm expect when the Obama administration refused to put a “blanket hold”  on deciding green card petitions from married, binational gay couples?

“Instead, those petitions in all likelihood will continue to be rejected, denying much-needed stability for gay families stuck in the nation’s immigration system.”  (The Advocate)

What a no brainer!

No matter how hard the group Immigration Equality would plead or make its case to the Obama  administration , the measure was so obviously a long shot in a lame inept attempt to help binational same-sex couples, who cannot sponsor a foreign spouse for a green card, due to the Defense of Marriage Act, which prohibits Federal recognition of same-sex marriage.

This exercise was one in futility and Immigration Equality, and the other organizations it leads by the nose on this topic of immigration equality for same-sex families,  has yet another  excuse for not sticking to the mission in the first place.

Immigration Equality had the opportunity to advocate and push to passage the Uniting American Families Act (UAFA) back in 2009 and during the time of a full Democratic House, Senate and Presidency, and at the time unprecedented support by Congress on an LGBT equality Bill, turned their back on UAFA as a stand alone Bill and hitched it to the greater and more problematic Comprehensive Immigration Reform.

This measure, now rejected by the Obama administration was a last ditch desperate attempt by Immigration Equality to cover its tracks and unfortunately the other organizations involved had little choice but to follow lock step to offer their support.

1. Drafting and advocating a path for special Visa interim legislation pending the repeal of DOMA in the form a special LGBT Visa similar to an R1 Visa, that could feasibly sunset at the time DOMA is repealed.  I pitched this idea to Immigration equality three years ago and they were not willing to pursue it.

2. They should not have hinged UAFA onto the impossible to accomplish Immigration Reform and when they did during the Lame Duck session of Congress advocated for DREAM Act ahead of binational couples – they could have reverted to a standalone UAFA at the time;

Now while I do not agree with the fact that the administration should continue enforcing the law, even though as Harmon correctly points out “it has declined to defend DOMA in multiple lawsuits and has worked around some of the 1996 law’s more severe consequences.” How can one expect the Administration to not enforce green card laws or refrain from adjudication – without some alternative such as the VISA idea or an actual law before it? It is a different kettle of fish!

Do not adjudicate? Leave in Limbo – I don’t get the logic when all IE needs to have done is find a way – a simple way – a special interim legal legitimate VISA!

Cry foul binationals, yes you should, not only does Immigration Equality continue to screw you, but now it is lazily pointing the finger at the Obama Administration, when it has not done its own work!

Yes, as the Advocate notes “President Obama issued a 2010 memo mandating hospital visitation rights for LGBT partners and spouses, for example, while the Justice Department dropped its opposition last year against joint bankruptcy filings by gay couples. But providing broad immigration relief to gay binational couples as DOMA’s constitutionality is decided appears to be a bridge too far at this point.”

That is correct my but the difference in this situation is obvious and clear, and I am not sure that Mr. Harmon quite has the full picture here.  I ask how can you expect the Administration to do something that has not been asked for?  Immigration Equality and not a single other LGBT group has asked for something on behalf of binational couples as an interim measure pending legislation that secured the green card!

According to Advocate the meeting where the idea to hold greencard applications in this way was rejected was at a meeting between LGBT advocates and government officials occurred January 30 at the Department of Justice in Washington, D.C. and was attended by representatives of Lambda Legal, the National Center for Lesbian Rights, the Human Rights Campaign, Immigration Equality, and Gay & Lesbian Advocates & Defenders.

Quote Harmon: “The administration in turn sent a contingent of senior officials from the White House, DOJ, and the Department of Homeland Security. According to multiple sources, those in attendance included White House LGBT liaison Gautam Raghavan, White House associate counsel to the president Kathleen Hartnett, Tony West, the assistant attorney general for the Justice Department’s civil division; and DHS executive secretary Philip McNamara, who last fall was appointed as an LGBT liaison to a Homeland Security working group reviewing the nation’s approximately 300,000 pending deportation cases.”

Well was that not a great opportunity to advocate for something innovative, legitimate and real that could actually have helped?

Nothing asked by Rachel Tiven and her group at immigration Equality makes any sense when taking note of the severity of the mistakes that they have made which has cost binationals years and years of equality and this final so called “big Ask” is simply ridiculous and without merit. A joke – short of the real work which they have failed to do on behalf of the LGBT community who depend on their assertion that they are the preeminent LGBT resource and advocacy group  in this arena.

This is clear and correct “DHS spokesman Peter Boogaard confirmed to The Advocate in a Thursday email that the administration will not put on hold green card adjudications involving married, binational gay couples as a matter of policy. “Pursuant to the Attorney General’s guidance, the Defense of Marriage Act remains in effect and the Executive Branch, including DHS, will continue to enforce it unless and until Congress repeals it or there is a final judicial determination that it is unconstitutional,” he wrote. Boogaard declined further explanation on the matter.”

Making an application for a green card under a law that rejects gay couples is entirely different to putting deportations on hold.. One is an application under a law that does not apply to gays and the other is to help couples about to be separated.  It is not the same! What can happen is to make a special law for same-sex couples that can unite them until DOMA changes and that involves a simple special VISA like the R1 Visa.

Steve Ralls, a spokesman for Immigration Equality, said of the administration’s response, “This is not about enforcement. It is about whether the president supports a legally sound, interim measure to keep these families together, or whether he believes they should be forced into legal limbo. Americans and their families, who want to follow the letter of the law should be supported, and not discouraged, in that endeavor.”  Exactly so Mr. Ralls – and that is why you and Immigration Equality should lift your creative innovative noses to smell the VISA -VISA VISA!

I do not agree that “To hold green cards in abeyance simply maintains the status quo and is not inconsistent with the administration’s decision to enforce DOMA,”  because I believe that the greencard law clearly does not apply to binational couples until DOMA is repealed or a binational couple successfully wins the battle in the Courts, thereby making greencard applications a risky application. However in the meantime there is an opportunity to effect a special Fiancé Visa and Same-sex visa  pending full Federal immigration equality.

Rachel Tiven and Steve Ralls Comments can be found on The Advocate.

Closed Petition Started in 2010 for Binational VISA at http://www.change.org/petitions/special-visa-for-binational-lgbt-spouse