You are here: Home » Israel bombarded by rockets and mortars assassinates Hamas leader 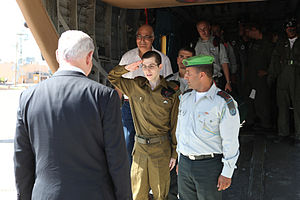 Consulate General of Israel to the Pacific Northwest Advisory: 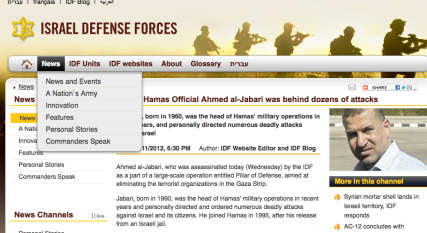 Since the beginning of the year, more than 800 rockets and mortar shells have been fired at Israel, a record amount since the end of Operation Cast Lead (January 2009). This peak is similar to the attacks that occurred in 2007-8. More than 125 missiles and mortars have fallen on Israel since Saturday afternoon. Today, Israel launched defensive operation Pillar of Defense to protect its civilians from terrorist attacks.

The current attacks began on Saturday night (Nov.10) when an anti-tank missile was fired at an army jeep traveling on the Israeli side of the border fence. Four IDF soldiers were injured. Since then, over 120 rockets have been fired at Israeli civilians.

The lives of 1 million Israeli civilians are being threatened and daily life in southern Israel has been totally disrupted. The pauses between the waves of rocket attacks are shortening. In the past month, Israel has been subjected to three separate periods of escalation.

“The duty of any government is to ensure the security of its population.

In a combined operation, Shin Bet and the IDF have targeted Ahmed Jabri, the head of Hamas’ military wing in the Gaza Strip. Jabri was a senior Hamas operative who served in the upper echelons of the Hamas’ command and was directly responsible for financing and executing terror attacks against the State of Israel. This operation sends a clear message to Hamas and other terrorist organizations in the region that, should the violence against Israeli citizens continue, Israel will be forced to strike.

Over the past few years, Jabri commanded Hamas’ military wing, and is responsible for the chain of events that saw Hamas’ takeover in Gaza and is complicit with all major violent escalations against Israel. In 2006, Jabari masterminded the attack that led to the murder of Israeli soldiers and the brutal capture of Gilad Shalit. As head of Hamas’ negotiations team, Jabri personally prevented the release of Gilad Shalit for over five years. Jabri, 52, lived in Gaza and was heavily involved in countless military actions since the beginning of the 1980s and has served as the senior official within Hamas’ military wing. He had close connections with Sheikh Yassin, who had personally endorsed Jabri’s acts of terror.

From 1982 until January 1995 he was arrested and imprisoned in Israel for his terrorist activities. During this time he joined Hamas, serving as the representative for all Hamas and Islamic Jihad members in his prison. His long duration in prison, and close proximity with other radical leaders, in combination with his own extreme ideology, has allowed him to assume a very prominent position within the Hamas leadership. In 1995, after his release, in his capacity as director of the “Noor Association”, he orchestrated a widespread monetary transfer scheme, supported by Sheikh Yassin, to fund released terrorist prisoners, their families and the family members of suicide bombers.

Since his release, he has been involved in multiple terrorist activities in his capacity as a military commander, coordinating a network of terrorist cells in their weapons smuggling operations, and delivering the strategic operations through the Hamas hierarchy. The worst terrorist atrocities that Israel has experienced in recent times have been a direct result of his involvement.

Israel has demonstrated great restraint for a long period but cannot stand for the recurring attacks on its citizens. No other state would accept a similar reality. The targets of the Israeli operation are all military. Hamas and the other terrorist organizations hide among the civilian population of Gaza. They also deliberately direct their fire at the civilian population of Israel. These acts constitute a double war crime. Israel will make every effort to prevent harm to the civilian population of Gaza, and regrets any injury to civilians. The border crossings from Israel to the Gaza Strip remain open, allowing for the routine passage of goods and humanitarian aid. The international community must act to stop the attacks on Israel from the Gaza Strip and should not wait for an Israeli reaction to act. Time and again, Israel has warned that it would not tolerate these attacks.”

Note:- Ahmed al-Jabari  was assassinated today (Wednesday) by the IDF as a part of a large-scale operation entitled Pillar of Defense, aimed at eliminating the terrorist organizations in the Gaza Strip.

Jabari, born in 1960, was the head of Hamas’ military operations in recent years and personally directed and ordered numerous deadly attacks against Israel and its citizens. He joined Hamas in 1995, after his release from an Israeli jail.

Due to his involvement with Hamas’ military activities in the Gaza Strip, Jabari was arrested by the Preventive Security Force of the Palestinian Authority in 1998. He was released in late 1999. In 2002, Jabari became the operational head of the militant wing at the height of the Second Intifada.

Jabari committed and commanded many attacks against Israel, including the abduction of SFC Gilad Shalit. SFC Shalit was captured by Palestinian terrorists in 2006 outside of the Gaza Strip. In October 2011, when a prisoner exchange was arranged exchanging SFC Shalit for 1,027 Palestinian prisoners in October 2011, Jabari personally escorted Shalit to the Rafah Crossing with Egypt, making a rare public appearance. In an interview with al-Hayat newspaper, Jabari confirmed that some of the 477 prisoners released in the first part of the prisoner exchange were collectively responsible for the deaths of 569 Israeli civilians.

Although Jabari was recognized as the head of Hamas’ military wing, Mohammed Deif has surfaced as a significant partner hiding in the background. In September 2010, Jabari threatened to increase attacks against Israel to derail the Israeli-Palestinian peace negotiations.

It is widely believed that Jabari along with Deif played the leading role in Hamas’ takeover of the Gaza Strip from the Fatah-led Palestinian Authority in June 2007.

Read the IDFblog’s Hamas Website for more information on Hamas