There is absolutely zero proof of a connection between the ALLOUT Petition and the fact that the Uganda Bill did not pass Parliament this month.

n a letter to supporters,  the online Petition group ALLOUT appears to be claiming a solo victory (implied or overt) for the fact that Uganda’s Parliament was unable to pass the Anti-Homosexuality Bill in accordance with Speaker Rebecca Kadaga’s  promise of passage in time for Xmas, and are using their claims to raise funds for their group.

This claim by ALL OUT, run by Americans,  is completely without foundation.   What makes the claim unconscionable is not only the fact that ALL OUT is using the assertion to raise funds for itself, but also because ALL OUT is fully aware that its Petition is flawed and misrepresents that President Museveni has the power to VETO the Ugandan Parliament’s private member Bill. The fact is the President of Uganda has no such veto power.

There is absolutely zero proof of a connection between the ALLOUT  Petition and the fact that the Uganda Bill did not pass Parliament this month.

The Anti-Homosexuality Bill is still a huge threat and the ALLOUT Petition, is using that to raise more funds, under the guise of its allegation that it procured the Parliamentary delay.

The fact is ALL OUT and its petition had absolutely no impact whatsoever or any control over the events that transpired this month to delay the Bill’s passage.  ALLOUT  did nothing to impact the fact that the Bill slipped down on the Ugandan Order Paper Agenda.
What is wrong with ALL OUT’s Petition:

1. ALLOUT”s Petition calls upon the Ugandan President Museveni to veto the Anti-Homosexuality Bill,  yet the President of Uganda does not have the power to veto a private member bill. Despite being informed of this misrepresentation ALLOUT continues to promote its incorrect Petition.  The request of the Petition cannot be accomplished either in the short or long term.

2. By this assertion ALL OUT seems to deny the fact that the entire world erupted into protest against the Bill. There are many other actions, including diplomacy by the U.S. State department, direct advocacy by Ugandan Gay rights activists,  and other correct petitions and much more that could feasibly lay the same claim to success that ALLOUT is doing.

Here is the e-mail sent to people by ALLOUT claiming victory and asking for donations:

BREAKING: Uganda’s Parliament just closed without voting on the “Kill the Gays” bill. Your pressure built to an unstoppable force that made Uganda’s politicians drop the bill way down the agenda – thank you. But they’ll be back in just a month, and their first order of business could be passing the bill.

Now is the moment to fight back with everything we’ve got in Uganda – and everywhere anti-gay laws exist. We can already see the massive impact we’ve had, so now we’re pulling out all the stops.

We have an amazing chance to fight back harder than ever, but we need your help. An All Out member has just pledged US$50,000 to turn the tide on anti-gay laws – but only if the rest of us are also willing to step up and pitch in too. If just 2,000 people make a gift to All Out in the next 5 days, it will trigger this incredible grant to strengthen our work around the world.

URGENT: Make a gift NOW to unlock this amazing resource to fight for love worldwide.

If you help meet the challenge in the next 5 days, your gift for equality – whether it’s £5, $25 or €50 – will be worth more than $50,000. This challenge is not about how much any one person can afford, but how many of us can come together to fight for what’s right. It’s about showing that enough of us have the commitment and drive to get the job done.

Being an All Out member means you know the extraordinary power of thousands of small acts – whether it’s clicks, calls or coins – coming together for a single, just purpose. More than 200,000 All Out members signed the petition to stop the “Kill the Gays” bill in less than a week. If just 2,000 of us make a gift in the next 5 days it will unlock the challenge grant to fight the bill and other anti-gay laws just like it – wherever it is needed most.

Fight back and make a real difference in one of the 76 countries where it’s illegal to be gay – give today and ask your friends to join you too.

We know the nightmare won’t stop at Uganda’s borders. The “Kill the Gays” bill passing could also embolden homophobic government officials in other countries where LGBT lives are at stake. Nigeria has proposed a similarly draconian “Jail the Gays” bill – which could pass any day now. There are more than 5 people fighting for their freedom in Cameroon after being charged under the existing anti-gay laws. We need to stop these horrific laws in their tracks and erase those that already exist.

P.S. All Out members come from all walks of life, ages, and nationalities – and we know not everyone can make a financial contribution when doing so could put their very lives in danger. If you’re fortunate enough to be in a position to donate for equality today, please consider making a gift for someone who can’t. And if you can’t make a gift at this time, you can still help unlock the challenge: forward this email to help get the word out and activate your network to meet the goal. Every effort makes a huge difference.

The truth is that Parliament delayed the Anti-Homosexuality Bill (AHB) until February because Parliament ran out of time and the AHB slipped down on the agenda because of precedence given to the OIL BILL , a Presidential speech, and the Accounting Bill.  There is no nexus to ALLOUT’s Petition or any other particular advocacy.

I do not find any direct link between what ALL OUT Petition claims to do and a current or potential impact on Uganda’s fight against Kill the Gays.  Certainly not in isolation, as it seems to assert.

I find this letter to be exploitative and the folks at ALLOUT should be ashamed to be using the Ugandan situation for their own gain. If anything, even though raising consciousness amongst westerners,  such Petitions may be causing more harm than good.   I challenge ALLOUT to reveal how the dollars are actually spent.

What is Andre Bank’s salary? and the others on the team?

If they are serving the interests of the Ugandan LGBT community, perhaps ALLOUT should consider raising money for the victims on the ground and those who will need safe houses and other resources to escape Ugandan anti-gay persecution.

There are so many other activists working on a voluntary basis making not one cent for hours and hours spent on helping to deter this Bill.

I am calling on ALLOUT for transparency to outline exactly how they plan to spend the $50,000 plus all monies raised on the Ugandan Bill.

Andre,1. On what basis are you claiming victory for the recess of Uganda’s parliament, yielding non passage of the Bill at this time?2. What are your plans for the $50,000 and the matching funds you plan to raise – does that have a specific designation for anti-AHB advocacy or is it going to ALLOUT’s operational use?3. Can you please provide the direct nexus you claim to have in your assertion that ALLOUT can claim victory for the AHB no longer being on top of the Ugandan Parliament’s Order papers?4.  Do you ahve a comment for the fact that I have written that ALLOUT has misrepresented that Museveni has veto power in your quest to obtain signatures – my assertion is that you are using misleading information to obtain Petition signatures?5. Please can you provide a disclosure of your ALLOUT salary?Thanks for your kind attention to my questions.regards,Melanie MELANIE NATHAN PRIVATE COURTS, INC. 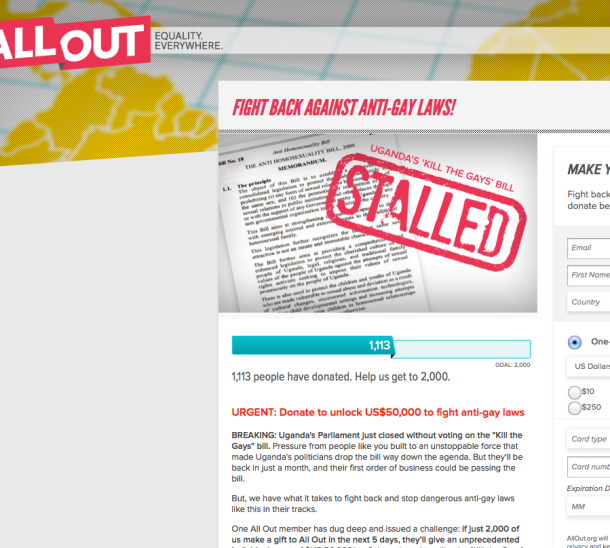 As ALL OUT is ramping up its fund raising efforts for its organization on the backs of Uganda’s unfortunate  Kill the Gays Bill,  – you will note that word “stalled” to create the false impression that the Ugandan Kill the Gays Bill was stalled as a direct result of ALL OUT’s petition:-

ANDRE BANKS DID NOT RESPOND TO MY E-MAIL for transparency.

I sent a second e-mail today 12/15/2012 after some research on my part: I noticed this time my email bounced bank from Andre Banks’ address and so I resent it from another e-mail address. I wonder if he blocked my e-mail as the newly sent one did not bounce back:-
Here is the new e-mail:

Please can you provide direction or comment with regard to the following. I would also appreciate a correction if I am incorrect in any of my understanding as indicated below:

My understanding of the construct of All Out as an Organization is as follows:

2. You have separately registered as a 501 (c) 4 – – this is alluded to but not specifically stated in small print at the bottom of your donations page – where you note your purpose as a campaign organization
is this IRS status under the name ALL OUT or also under “The Purpose Foundation”

3. ALL OUT was founded by Andre and Jeremy with involvement from the “for profit” enterprise that Jeremy is currently involved with which is known as Purpose and located at- http://www.Purpose.com – please can you confirm that initial involvement. Is Purpose.com still working with ALLOUT and in what capacity.

4. When was your latest IRS 990 filing and where can it be found

5. Please can you name the members of the Board for ALL OUT or any group that serves as its non profit proxy.

6. When people donate money on your donation page does it go to ALL OUT account via the 501 (c) 4 status?

7. Can you kindly provide a copy of or a link to your annual budget?

8. Kindly provide disclosure of your annual salary via ALL OUT and connected affiliates?

I am under deadline for this information and would greatly appreciate a reponse as soon as possible, – specifically by Tuesday 6 PM.

Thanks very much for your kind co operation.

I have to thanks a volunteer researcher who came up with this thought:

I wonder if AllOUT will be donating any of their new found $50,000 pledge + 2,000 ‘gifts for equality’ to SMUG, the Ugandan organization they linked themselves to with this press quote yesterday, where AllOUT  said:

“AllOut.org, which collected more than 240,000 petition signatures opposing the legislation and is working in tandem with SMUG, expects to continue fight against the bill when Parliament reopens in February.”

SMUG’s entire organization exists on an annual budget of $45,000 which itself is less than half of the purported grant pledge never mind the required gifts of ‘£5, $25 or €50’ collected to “make” the grant happen.

PURPOSE FOUNDATION HAS LISTED ALL OUT ON ITS 2010  IRS 990 Form  on Guidestar.  I am unable to find 2011’s form which may not have been filed yet.  Still researching.

I wonder if ALL OUT really needs to use the Ugandans plight as a fundraising tool?