You are here: Home » Why I feel Shame on this Martin Luther King Jr Birthday

Why this MLK Day feels like no other to me!

I cannot help but wonder about Dr. Martin Luther King, Jnr. and what he would done about the Anti-Homosexuality Bill in Uganda, as well as the Jail the Gays Bill in Nigeria.

I imagine Dr. King in the context of today: a non segregated America, with an African American President, support for equality and a surge of global anti-gay sentiment that is torturing and killing Africans, with very little outcry from U.S. Civil rights organizations as well as Christian and other religious groups.

I may be ‘dreaming,’ but in my heart I know MLK would have not only had something poignant to say, but that he would have used his experience and power to make a critical impact. Somehow I think Bayard Rustin and Dr. King may have organized a march for the true ‘Soul of Africa.’

Today, the National Black Justice Coalition (NBJC) joined with the nation to commemorate the life and legacy of Dr. Martin Luther King, Jr. and released this statement:

As an organization that stands on the shoulders of King, NBJC strives to ensure that his message of hope and non-violence lives on by applying it in our efforts to eradicate racism and homophobia in our society.

America has made great strides toward becoming a more just and fair society. However, we still live in a world where far too many are marginalized and deprived of living their best lives. We continue to be bombarded with reports of hate violence, and far too many barriers still exist that adversely affect our ability as Black LGBT people to thrive. A key pillar of NBJC’s work is to move our nation to action in building King’s “beloved community” where we can live openly, honestly and safely in all aspects of life.

This work is not easy, but it is essential. We must not yield in the face of opposition or shameful circumstances that arise when we speak truth to those who stand in the way of justice.  King’s legacy challenges us to stand up for the things that are good and great about our nation–to be ready, always, to defend the foundation of freedom and justice for all.  We, as Black and LGBT people, must lift up each other to fight on for what we know is right.

Noting that we are inextricably linked through our common humanity and our fight for equality, King stated, “Eventually the civil rights movement will have contributed infinitely more to the nation than the eradication of racial injustice. It will have enlarged the concept of brotherhood to a vision of total interrelatedness.”

It is with this sentiment of universal love that NBJC calls on all people of good will to recommit themselves to the movement for equality and justice. We must remind ourselves, like King did, why we cannot wait, why the time to initiate dialogue and action will always be now. Our future as a peaceful and humane nation, free of violence and prejudice, depends upon it.

But where is the NBJC on Gays in Africa?

To date I have yet to see a single post, email, or heard a single word from National Black Justice Coalition (NBJC), civil rights organization dedicated to empowering Black lesbian, gay, bisexual, and transgender (LGBT) people, its mission “to end racism and homophobia,” since the passage of Uganda’s Anti-Homosexuality Bill in Uganda (DEC 2013.) And  have not heard a word about the 168 arrests of African gays in Nigeria. I have also not seen anything about the Passage and signing by President Goodluck Jonathan’s Nigerian Jail the Gays Bill.

What is going on America? Do we not care about LGBTI Africa at all? Are we all about self-serving press releases and that is it?

So on this Martin Luther King Jr. day, I do not celebrate anything at all, as I believe you have disavowed the name and the importance of what Dr. King stood for, through your deathly silence and your failure to express outrage. As an American LGBT person, today I feel shame for America’s silence and especially for the National Black Justice Coalition.

The last Posts on NBJC websites and no mention of the suffering of Gays in Africa since the passage of the 2 horrific Bills: 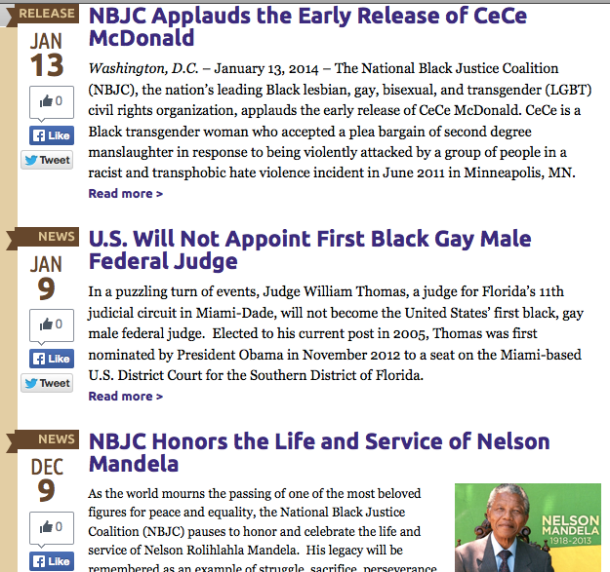