You are here: Home » LGBT Foreign Policy Applauded AND Human Rights should Start at Home with Fiance Visas and Greencards for Same-sex Couples

Pro-Gay Foreign Policy Applauded,  YET Obama Administration Fails Binationals at home; surely being separated from fiance’s and spouses is a human rights issue too? Melanie Nathan 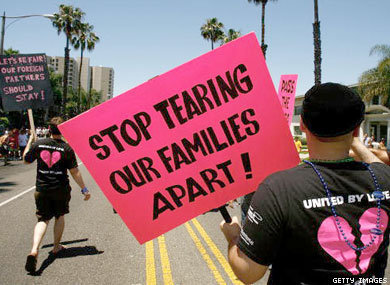 Building on pro-gay policies put in place by Secretary of State Hillary Clinton, President Obama today ordered overseas federal agencies to fight local anti-gay violence and provide asylum to homosexuals seeking protection. This came on the same day as Secretary Clinton’s groundbreaking address to the delegates in Geneva on International  Human Rights Day, which included many advocates and activists from Africa. Yet nothing is being done to help our binational same-sex couples on U.S. shores who have been separated from loved ones for years. Surely this is a human rights infraction worthy of immediate attention on home soil?

Obama said, “I am deeply concerned by the violence and discrimination targeting LGBT persons around the world — whether it is passing laws that criminalize LGBT status, beating citizens simply for joining peaceful LGBT pride celebrations, or killing men, women, and children for their perceived sexual orientation.”

Statement by Ambassador Susan E. Rice, U.S. Permanent Representative to the United Nations, on the President’s Memorandum on International Initiatives to Advance the Human Rights of LGBT Persons:

Today, President Obama directed all agencies to protect and promote the human rights of lesbian, gay, bisexual, and transgender persons abroad. At the United Nations, we have strongly supported efforts to codify and enshrine the promise of equality for the LGBT community, and the President’s action adds yet more force to our urgent fight.

Since taking office in 2009, the Obama Administration has worked tirelessly within the UN system to advance the human rights of the world’s LGBT persons. Early on, we signed the UN General Assembly’s Statement on Sexual Orientation on Gender Identity. We joined the LGBT Core Groups in Geneva and New York. We won NGO consultative status for the International Gay and Lesbian Human Rights Commission. We championed the first UN resolution dedicated to advancing the basic and fundamental rights of LGBT persons. Last December, on Human Rights Day, we pledged to restore language including LGBT individuals in a resolution condemning extrajudicial killings. Within two weeks, we did so.

There is far more work to do before our LGBT friends, neighbors, parents and children live in a world free of discrimination. Through steadfast defense of our universal values, persistent engagement with international partners, and the full force of U.S. efforts under the law, we will get there. I look forward to continuing our work and proudly carrying out the President’s directive.

While as an activist on the issue I am deeply grateful to the President and Sec Clinton,  but I cannot help but allude to a recent conversation I had with David Bahati, the member of the Ugandan parliament currently seeking to pass the Ugandan Anti-homosexuality Bill  (the Kill-The -Gays -Bill.) Bahati asked me a poignant question: “surely if your country (USA)  thought being gay is okay, you would have laws that protect gays and not laws that work against gays?”

This is a time when we as LGBT Activists should be thanking President Obama for his foreign policy abroad, and at the same time  insisting that  the President clean house at home as a show that we mean business abroad:

Repealing DOMA is now a matter of  significant urgency.  The Defense of Marriage Act must be repealed. We must participate in the repair of the insidious human rights violations to our own citizens and residents before our international voice can speak with true validity.

DOMA denies same-sex couples the basic federal benefits that other married or engaged US couples receive.  President Obama and Secretary Clinton have stated in this foreign policy that the right to love is a human right. Yet DOMA denies that right as it flagrantly separates same-sex couples who have partners in foreign nations.

One such right denied binational LGBT couples  is the right to sponsor a spouse or bring a fiance into the USA on a special fiance VISA.  Thousands of US citizens and residents are currently separated from loved ones who cannot enter the USA because of the restrictive nature of DOMA.

Surely President OBAMA should fix house as a matter of urgency to bolster his reprimand to other Nations?

While the president has ordered that LGBT spouses should not be deported – he has done nothing to assist those who remain separated on foreign shores.  Over two years ago I drafted a Petition for a special VISA on change.org to help such couples. It would be great to see someone in Congress take some forward thinking action.

However nothing can derogate from the immediate need to repeal DOMA, especially in the interests of our binational LGBTI couples.

CALL TO ACTION: Support the Respect for Marriage Act and Repeal DOMA and in the meantime tell your Congressional Reps to get creative and issue special VISAS for LGBT Fiance’s. Is this Human Rights? One of many stories – this one appeared without solicitation on the Petition I started over a year ago:

My partner of 10 years was taken away Jan 22 two and a half years ago and then deported. The day they put him on a plane he lost all rights. He has no criminal record. I am a AF verteran. The immigration judge signed a stay of deportation one hour too late. ICE knew that the legal papers were on the judges desk via communication from our local office of Congress and supported by our Senator. They did not care. I have spent my retirement savings, 401K, everything on attempting to get him a Humanitarian Visa to return to the US from Guatemala. He has been robbed several times, once by gunpoint, extortionists have targeted him and his remaining relatives. He was brought here at 14 with his other 9 siblings by his mother to escape the genicide supported by the USA. He is the poster child of NACARA but with one exception. He tried to do the right thing in 1989 and was denied in the courts. I have to wonder if that was the wrong thing to do. The rest of his family are now residents or citizens because they hid in the shadows until NACARA was signed by President Clinton. The 10’s of thousands of dollars spent on attorney’s…….the stress on our families and extended families………Please understand that lawyers run this county. Even the President and his wife are attornys. I pray for all of us who are being persecuted by the lack of justice. I am not proud of the counrty I live in for turning 911 into an opportunity for hate crimes against a world of hard working families and destroying these same families. I am in my 50’s so I will not likely recover the $$$ to retire before I die. Please, sign this.