You are here: Home » Gay Asylum a Western Shame 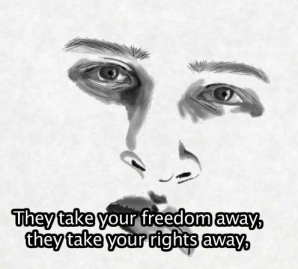 From persecution to brutality to escape, all horrifically traumatic and yet when it comes to seeking asylum, we the West have the audacity to exacerbate the pain. Are we not as guilty as the initial persecutors if we fail to adjust our systems, our laws, our protocols to mitigate the pain?

Tacko is a gay activist and civil rights leader from Senegal, a nation where openly gay people are politically persecuted, imprisoned and murdered for being gay. Tacko is a political activist in Movement for Justice, fighting for all immigrant rights, respect and equality.

People like Tacko are held in excruciating limbo by the United Kingdom’s Border Agency.  UKBA is slow to grant asylum to persecuted asylum seekers who have already gone through (often) death defying measures to make it to foreign soil.  Often asylum seekers are returned to their persecuting countries because of poor legal representation and difficult to prove cases.

Tacko gave this interview, and Ciselle Fung made this animation from it, to give voice to the truth, the experience of Tacko stands for many thousands.

While Britain and the U.S.A.  have joined calls for nations to end the criminalization and persecution of homosexuality, both countries have withheld sanctuary from people facing that very danger.

It is time to call for the entire system pertaining to LGBTI refugees and asylum seekers to change.

MFJ, based in the UK is sending the clear message now: Visit  http://www.movementforjustice.org/2012/07/voice-tacko-speaks-on-being-a-refugee-and-seeking-asylum/

Very little is being done by U.S.  LGBTI and human rights organizations to advocate for changes in the law to help our international LGBTI asylum seekers, escape and attain asylum.

VOICE from Ciselle Fung on Vimeo.

VOICE from Ciselle Fung on Vimeo.