You are here: Home » Obama clashes with Senegal President over gay rights

President Barack Obama on Thursday praised the Supreme Court’s ruling on same-sex marriage as a “victory for American democracy” and even called the Prop 8 and DOMA Plaintiff’s to congratulate them while he was on board Air Force One heading out to Africa.  However AP has reported that his Senegal host was not too impressed and had quite the opposite view in a report entitled “Obama clashes with African host over gay rights:”

“President Obama clashed with his African host over gay rights in a sign of how far the movement has to go internationally. “People should be treated equally, and that’s a principle that I think applies universally,” he said.”

Obama said recognition of gay unions in the United States should cross state lines and that equal rights should be recognized universally. It was his first chance to expand on his thoughts about the ruling, which was issued Wednesday as he flew to Senegal, one of many African countries that outlaw homosexuality.

“We are still not ready to decriminalize homosexuality,” Sall said, while insisting that the country is “very tolerant” and needs more time to digest the issue without pressure. “This does not mean we are homophobic.”

What I find upsetting as an activist working the African criminalization of homosexuality beat is that the President apparently did not push the issue in a private meeting with Sall.  “Obama said gay rights didn’t come up in their private meeting at the presidential palace, a mansion that looks somewhat similar to the White House. But Obama said he wants to send a message to Africans that while he respects differing personal and religious views on the matter, it’s important to have nondiscrimination under the law.”

Perhaps it may not be protocol to challenge one’s host, but to my way of thinking this is such a serious issue it ought to go beyond protocol. I do however fully understand that certain countries may not be “ready” and some may persecute gays less than others, but Obama has publicly stated that these laws are “odious” and I believe he should have spoken to it in private.  I do also understand that there is always the fear of backlash against an LGBTI/ gay community – it is a tightrope and very complicated. Many African countries tout their sovereignty as a reason not to be expected to decriminalize homosexuality by international advocates. However many of these countries have signed on to The Universal Declaration of Human Rights and their laws do conflict with their treaties and obligations. They also forget that the roots of such criminalization were established during their colonial eras.

Senegal has signed on to the Universal Declaration of Human Rights and has been called out on the LGBTI issue at least three times by the United Nations Human Rights Commission. 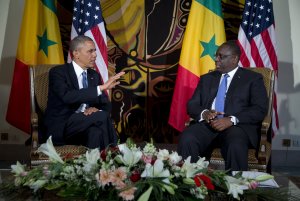 “A report released Monday by Amnesty International says 38 African countries criminalize homosexuality. In four of those — Mauritania, northern Nigeria, southern Somalia and Sudan — the punishment is death. These laws appear to have broad public support. A June 4 Pew Research Center survey found at least nine of 10 respondents in Senegal, Kenya, Ghana, Uganda and Nigeria believe homosexuality should not be accepted by society.” (AP)

“Papi Nbodj, a 19-year-old student who stood by the road to the presidential palace to see Obama’s arrival, said homosexuality is against the religious beliefs of most in Senegal.

“We are in a Muslim country, so we certainly cannot have it here,” he said. “And for me it’s not OK to have this anywhere in the world.””

AP goes on to note that:

“Sall sought to reassure Obama that gays are not persecuted in Senegal. But under Senegalese law, “an improper or unnatural act with a person of the same sex” can be punished by up to five years in prison.

Ndeye Kebe, president of a human rights organization that works with homosexuals called Women’s Smile, disputed Sall’s contention that gays are not discriminated against.

“I know of around a dozen people who are in prison for homosexuality as we speak,” she said. “There wasn’t any real proof against them, but they were found guilty and they are in prison.”

And as recently as February of 2008, police rounded up men suspected of being homosexual after a Senegalese tabloid published photographs of a clandestine gay wedding in a suburb of Dakar. Gays went into hiding or fled to neighboring countries, but they were pushed out of Gambia by the president’s threat of decapitation.” 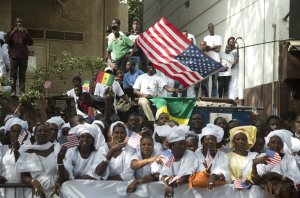 “I believe at the root of who we are as a people, as Americans, is the basic precept that we are all equal under the law,” he said. “We believe in basic fairness. And what I think yesterday’s ruling signifies is one more step towards ensuring that those basic principles apply to everybody.”

Obama even used world leader on the issue, former President Nelson Mandela, as he offered prayers for the South African icon , who is gravely ill, ahead of Obama’s planned visit to South Africa, this weekend. Obama said he was inspired to become political active by Mandela’s example in the anti-apartheid movement of being willing to sacrifice his life for a belief in equal treatment. “I think he’s a hero for the world,” Obama said. “And if and when he passes from this place, one thing I think we’ll all know is that his legacy is one that will linger on throughout the ages.”

President Obama’s comments about LGBT equality which he made today following the Supreme Court marriage equaity rulings challenges him to “walk the walk”— while on his week-long three country tour of Africa.  Today he commented after the Supreme Court of the United States ruled DOMA unconstitutional: READ MORE at http://oblogdeeoblogda.me/2013/06/27/president-obama-must-speak-for-gay-rights-in-africa/

6 Comments on “Obama clashes with Senegal President over gay rights”