You are here: Home » Catholic Diocese fires administrator in defiance of Pope’s call not to judge gays

“If someone who is gay seeks the Lord with good will, who am I to judge?” Pope Francis

The Catholic Church has fired another school administrator for getting same-sex married. Vice Principal Mark Zmuda of Eastside Catholic in Seattle married his husband over the summer. Now that the Catholic diocese of Seattle has learned of it, the result is the usual – forced resignation. One day before the school’s holiday break. Merry Christmas, Mr. Zmuda.

Senior class vice president Julia Troy, of Eastside Catholic High School in Sammamish, Washington, decided to take action. Direct action. The students have staged a sit-in protest in the school’s cafeteria.  Teachers are not making them go to class. The school administration is blaming the Catholic Diocese. No one is happy at Eastside Catholic.

The firing comes shortly after both TIME and The Advocate named The Pope their Person of the Year. 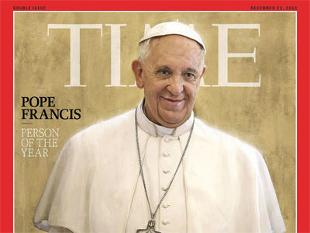 On the day that The Advocate award was announced, mere days after TIME’s announcement that the Pope was person of the year, I posted a comment to my Facebook wall comparing those awards to Obama getting the Nobel Peace Prize – an award for what people HOPE the recipient will do, not for anything they’ve actually done. It did not work out so well for the Nobel folks. And now one wonders how The Advocate could have missed the fact that the day after the Pope made the infamous “Who am I to judge” comment, he excommunicated a priest for being pro-gay marriage. Judge much?

Real people need more than pretty words. Awards should be handed out for more than wishful thinking.

And will the much touted Employment Non-Discrimination Act (ENDA) do anything about this never ending trail of fired employees of Catholic entities? Not in its current form. The religious exemptions contained in the bill that passed the Senate gives not just churches but any religious-affiliated employer free reign to hire & fire at their own discretion. And even if those religious exemptions are removed, will ENDA protect against the contract requiring strict adherence to Catholic doctrine that teachers, coaches and administrators – the poster children of all ENDA campaigns – are forced to sign?

Perhaps the Pope should consider courting his younger generation and seize this opportunity – to show his church is evolving and that he is worthy of the praise being heaped upon him. Hear the voice of the students and remedy this mess- after all actions speak louder than words.

Update: The school has just cancelled all classes tomorrow due to “pending snow forecast”!