You are here: Home » Asking King of Norway to save Gay Iraqi Man Azad from Deportation to Iraq 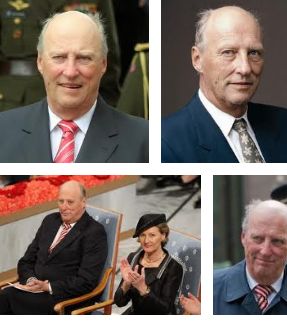 Updated: Petition Started on change.org see below.  Outrageous reasons to deport gay man from Norway;  save Azad , a young homosexual man, from deportation back to Iraq.

The High Court in Oslo, Norway has turned down the application for political asylum after being  petitioned by Azad, a 33 year old Iraqi gay man who lives in Norway with his partner. The reasons put forth defy justification given the current milieu for gay people in Iraq.

According to the High Court, in the Kurdish area of northern Iraq, gay people are not murdered, as they are in the rest of the country, but are hit by less severe penalties.

EVERYONE Group, a human rights organization in the Country is pleading to the King of Norway and others to save Azad from certain death.

The court, has in essence, invited the young man not to publicly express his sexual orientation, once he is deported: thus, according to the judges, he will avoid any form of persecution.

This is of course a ridiculous notion, as Norwegians of all people should be the first to offer a human rights response, embracing the fundamental right to one’s orientation.

“Norway has had a commendable past in the field of human rights,” say Roberto Malini, Matteo Pegoraro and Dario Piccciau, co-presidents of EveryOne Group, “but for some years the Scandinavian nation has been committing serious violations against LGBT people seeking political asylum after fleeing from countries where gays and lesbians are persecuted and often killed.”

The Norwegian Government and the judiciary have justified the deportations by saying that if a gay person acts with discretion the risks are avoided.  To assume this to be the only danger, that is being outed or actually ‘out’ makes no sense, given the documented cases that the Norwegian courts should have available to it.

Gay people should be allowed to live their orientation as a human right within itself and countries like Norway should be the first to heed such right.

Whilst it is true that the Iraqi government has decriminalized homosexuality, gays and all LGBT people  are  persecuted under Islamic law, and they are often arrested following complaints from relatives or neighbors, despite not publicly manifesting their sexual orientation.

EveryOne Group has demonstrated through documentation the severe persecution of gays underway in Iraq, citing the reports from Iraqi LGBT, a human rights organization for gays and lesbians based in London, which document assaults, cases of torture and murders of gay men that have occurred both in the Kurdish and Sunni communities.

“At least 600 homosexuals have been attacked and murdered since 2003,” says EveryOne, “often after cruel torture, such as one practice that foresees that a gay man’s anus is glued up with a powerful glue. After this he is given a laxative, which leads to an extremely painful death.

The international LGBT rights organizations now consider Iraq as one of the places where the persecution of gays and lesbians is most widespread and brutal”.

EveryOne Group, which, due to its humanitarian activities, well aware of the danger that Azad  would face if deported back to Iraq, has launched an urgent appeal to King Harald V of Norway, the Government of Oslo, the Committee of the Nobel Peace Prize in Oslo, asking the Norwegian Government (based on the evidence of the persecution of gays in Iraq) to retract its decision, to honor the Geneva Convention on Refugees, and grant Azad Hassan Rasol political asylum.

Young LGBT activists in America such as Kristina Lapinski of Gay U.S.A. the Movie are outraged by the notion of sending a gay man back to Iraq.  “I have always had such a favorable view of Norway as do my peers,” says Lapinski, ” It is a country I would love to visit. How can they send him back after being in the press and news?”

“We have also sent an urgent appeal to the UN High Commissioners for Refugees and Human Rights and the EU Commissioner for Human Rights to prevent the deportation and – if the hostile attitude towards the young man and the violation of his right to freedom and life should be maintained by the Norwegian authorities – to start procedures to ensure that the young man is taken in by another EU country, in a humanitarian exception to the Dublin Convention.

In any case, it is vital that Azad is not deported back to a destiny of humiliation, suffering, marginalization, violence and probable death in Iraq. Iraq has, in fact, one the highest number of reported cases of persecution and summary executions of LGBT people: one of the most tragic in the contemporary world”.

In fact, as far as we are concerned here in the U.S.A., this publicity is enough to warrant the protection of Rasol from being sent back to Iraq.  Criminalization of homosexuality is not the only factor to warrant the protection for asylum, it ought to be adjudicated on the entire realm of persecution, country by country. This ought to be updated to include the reality of religious militias and current scene in Iraq, regardless of the region.

Here at Oblogdee and on the Advocate, I recently posted an article and a Video (below) of the impact of Islamic law on the refugees from Iraq and how much worse their position has become since the Bush War in Iraq, causing graver hardship as a result of militia target actions and reprisals against gay people and their families.

There is no excuse for the denial of asylum by a country such as Norway in this case and their system and government ought to be ashamed if they do  not save the life of Azad!

PETITION CAN BE SIGNED BY CLICKING HERE: http://www.change.org/petitions/norway-stop-deportation-of-gay-ah-rasol-to-iraq#

Other Articles by Melanie Nathan on the subject of Iraq and Gay: 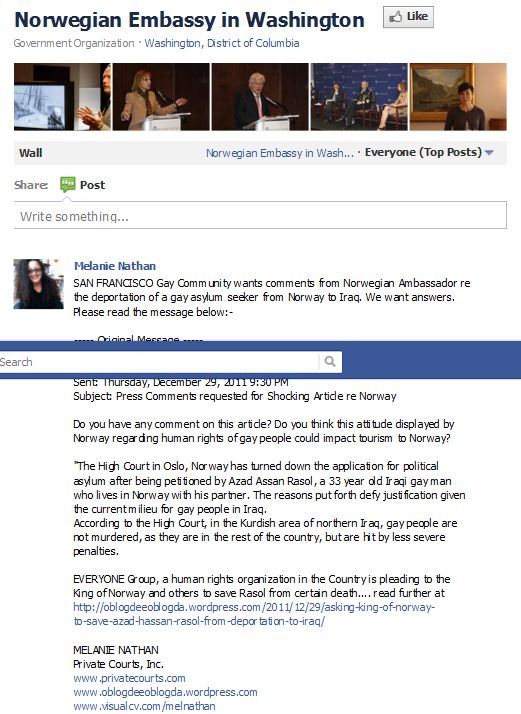