You are here: Home » The Castro Gives ‘Call Me Kuchu’ Historic Standing Ovation 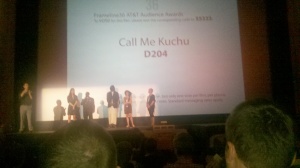 Never in the history of a Frameline Film Festival has there been a solid five minute standing ovation following the screening of a film. Such was the resounding applause from the Castro community for the brilliant “Call Me Kuchu,” as its filmmakers Malika Zouhali-Worral, Katherine Fairfax Wright, together with attending activists who participated in the film, took to the stage.

Call me Kuchu is a remarkable feat as it not only tells the story but also bears witness to what could be a quest for the obliteration of all LGBTI people in Uganda.

The story isolates the LGBTI community to the few who have “come out” to fight,  in stark contrast and highlighting the many who are probably in hiding, as we enter the world of gay activist David Kato and his friends.  From an unassuming office at the end of a dirt track Kato labors to repeal Uganda’s homophobic laws and liberate his fellow lesbian, gay, bisexual and transgender men and women, or “kuchus.”

We observe the impact of the introduction of the “Anti-Homosexuality Bill” which proposes harsh criminal sentences and the death penalty  for those accused of “aggravated homosexuality.” The film briefly reflects on Lou Engle, who “christened Uganda ground zero” in a crusade against homosexuality launched by American Evangelicals, asserting false notions and scripture, to crowds ready to drown Uganda’s ills with scapegoats.

Kato, Uganda’s first openly gay man, is one of the few who dare to publicly protest the government led homophobia. Working with an idiosyncratic clan of fellow activists, Kato fights Uganda’s government and tabloids in the courts, on television, and at the United Nations. Because, he insists, “if we keep on hiding, they will say we’re not here.”

I did not expect to be so deeply impacted by the film, thinking that my years of coverage of the Ugandan “Kill the Gays Bill,”  my contact with Kato, Kasha, Bishop Christopher and even the villains, Bahati and Muhame,  would render me immune from any story telling. But  I was wrong. The film invoked deep emotion for me and noticeable the 1400 others in the Castro Theater who yelled and applauded throughout the screening.

It felt as if we too were living the struggle, surviving the slurs, eating the chicken and ignoring the dust. Taken through the evolving events from the “Rolling Stone” gay face and address outings, calling fellow Ugandans to “hang them,” to the sudden murder of Kato and the outlandish rage that almost provoked a riot at his funeral.  We were there!

Through it all our privileged gay Castro audience is slammed against the wall of hate, to face the one truth and  that is ‘this is all of us’ and no longer ‘them;’ “we are one,” as participant and LGBT Ugandan supporter Bishop Christopher Senyonjo notes.

A story told in his words, David Kato’s final testimony lives on in this film, while his work is continued by the fellow activists he left behind.  We weep remembering the vibrancy of the few, who with overt and overwhelming oppression are still facing the unknown.

The film’s brilliance  is in the raw depiction of a reality that belies film;  it seemed as if there were no filmmakers.

The living history and legacy of those in the turmoil and the enormous courage depicted by the activists, took the Castro by storm as the LGBTI community of San Francisco realized the importance of this work, bringing us all face to face with the reality in Uganda and with the added component of the export of American hate. Surely we have an obligation of much more than applause?

Do not miss this film. http://callmekuchu.com

Special thanks to America World Jewish Services for inviting me to co-host the cocktail reception in support of the Film Call Me Kuchu.  It was an amazing event and the AJWS support of Uganda’s LGBTI community is so needed and appreciated.  Picture is Laura Talmus from AJWS and Malika Zouhali Worral taken at the AJWS reception.

ARTICLES ON UGANDA ON OBLOGDEE