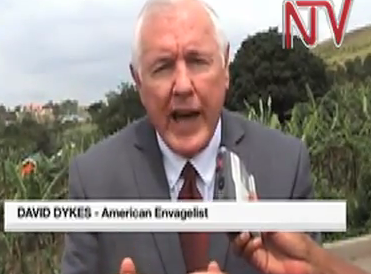 After watching Pastor David Dykes from Texas, in the Video below, yet another U.S.A. pastor in Uganda, touting the legislature’s duty to pass the pending Anti-Homosexuality Bill, otherwise dubbed “The Kill the Gays Bill,” my original reaction was to ignore his babble and not give him media time.  However soon realized that as much as I would like to ignore his lying rant, I could not for the reasons outlined in this post.

Exposing his rhetoric and lies is imperative to the fight against the Anti-homosexuality Bill.  Much of what he says are lies and they are the same lies of Scott Lively ilk that got this Bill into the legislature in the first place.

Dykes wants you to believe that people in America and Canada will  get arrested under a “hate crime” when speaking out against homosexuality. That is an out and out lie.  There is no such ‘hate crime” as mentioned by David Dykes.  He has all the freedom of his religion that he needs.  He can go to Church and pray and preach and no one will stop him.

What he does not seem to understand or respect is the fact that sovereign countries and even his own country have laws pertaining to equality- even in the Ugandan constitution – to protect people from religious zealotry such as his. Laws that separate church dogma (interpretation) from civil and human rights. But he wants none of that. He wants his interpretation of Bible and his religion to govern our laws.

Why does he lie like this, and now? Because he fears that the Ugandan bill (AHB) is losing ground as the Ugandans realize that such a Bill is redundant, unconstitutional, against international treaties, and based on hate. If the Ugandan Kill the Gays Bill loses, so fades the hopes of the U.S. Evangelicals that countries in Africa could be used as prototypes for how the West should find final solution to not only to end the de jure quest for equality by gays, but also to end our de facto existence – yes by death to the sinners!

I spoke to Cathy Kristofferson, State Co-lead of GetEQUAL/MA, who has co-led many of the MA protests against Scott Lively and other US Pastors involved in the active campaign against Uganda’s gay community:-

“Watching the NTV video posted here, I thought Pastor David Dykes of Texas must be the second coming of Scott Lively, who is now subject of a lawsuit under the Alien Tort Act brought by the Center for Constitutional Research on behalf of Ugandan gay human rights defenders. The American Evangelicals must be in a panic that the Speaker Kadaga promised ‘Christmas gift’ was not delivered and so have sent in reinforcements on the outrageous lies front “at this time of crisis”.

No one is going to arrest Mr. Dykes for speaking out against marriage equality!  Not here or Canada and not now or “maybe soon” or whenever the ridiculously claimed ‘hate crime’ law he is lying about doesn’t come to fruition.”

I asked why should we pay attention to the lies he is spewing in some other country?

“Because if you’ve seen any of the quotes lately from the likes of Huckabee, Perkins, Lively, and others you will note that they want the same laws here in the US – A Kill The Gays Bill! – and are just using Uganda and other sovereign African nations at their testing grounds for the prototype bill.”

Kristofferson went on to say:

“The only blood money involved is that which he has promised the Ugandans ‘from individuals who have let it be known’ should foreign aid be cut due to the passage of the AHB.  And the blood spilled will be that of the Ugandan gay community’s due to the ever heightened homophobia fomented due to the hate and lies spread by the likes of David Dykes long before their own government even has the chance to legislate the death penalty or not! And you can be sure his visit was timed to help ensure that when the Ugandan Parliament comes back from recess the AHB will top the list of items to be debated.

It is also interesting that he claims he represents “the” church in America.   I always thought people here had freedom of religion to practice whatever religion they choose but I guess they are planning to change that soon too!”