People for the American Way are asking that you sign their petition. Here is the story: 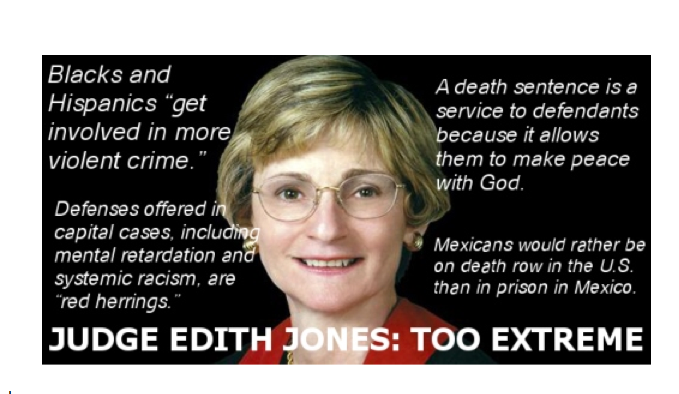 The New York Times reports that Judge Edith Jones, a right-wing firebrand who sits on the U.S. Court of Appeals for the Fifth Circuit and many saw as a potential Supreme Court nominee under President Bush, spouted extreme and bigoted viewpoints in a recent address to a Federalist Society law student group. If this is true, she needs to step down immediately.

Tell Fifth Circuit Chief Judge Carl E. Stewart that if Judge Jones said what’s been reported, she must step down or be removed from the bench.

In her address, which was about the death penalty, Judge Jones is reported to have promoted these views — many apparently stated as fact:

These statements show a clear bias and bigotry and are very troubling for a sitting judge. Civil rights organizations have filed a complaint with the Fifth Circuit claiming Jones violated ethical standards applicable to federal judges under the Code of Conduct for United States judges.

Appointed to the Fifth Circuit by President Reagan in 1985, Jones has a long history of right-wing extremism on the bench. During an oral argument in a sexual harassment case, Judge Jones remarked, “they didn’t rape her, did they?”, and when the woman’s lawyer replied that the woman had complained that “one of the guys pinched her breast,” Jones replied, “Well, he apologized.” And in Doe v. Taylor Indep. School. Dist., Judge Jones broke with the majority that ruled a 15-year-old student who had been molested by her high school teacher for over a year could sue school officials, who had been repeatedly told about the teacher’s actions. Jones argued in her dissent that whether a student had the constitutional right to be free from this kind of sexual abuse was “still vague.”

But, as much as we disagree with her judicial philosophy, it’s not Judge Jones’s judicial decisions that warrant her removal — it’s her clear disregard for ethics rules and her unabashed bias, which she has flamboyantly put on display, undermining the public’s confidence in her as a fair arbiter of the law and justice.

If Judge Jones said what’s been reported, she needs to resign now, or be removed.Sign the petition now. Then help spread the word.