San Francisco Opera’s 91st season opened last night, with a performance of Arrigo Boito’s Mephistopheles, described as “one of the most impressive productions ever seen at the War Memorial Opera House”. And what made it more impressive for us, was the enormous support for a vigil in support LGBT Russians, which was staged outside the Opera House.

The opening night celebrations included Opera Ball 2013: The Garden of Good and Evil, at San Francisco City Hall,  a Champagne Promenade Reception on the elegant outdoor Loggia of the Opera House and of course the performance, which included openly lesbian opera star Patricia Racette.

Ms. Racette and her partner Beth Clayton, also an opera star,  had agreed to lend their support to the vigil, which was organized by a coalition of LGBT activists, including  Gays WIthout Border, PCI-Justice and DumpRussianVodka.com, through a letter agreeing to stand in solidarity with Russia’s LGBT community:

“Operatic singing is a sport in itself really, and I can’t imagine Patricia or myself being ‘boycotted’ from performing in any country for any reason based on our sexual orientation! We wish this peaceful but meaningful protest all success and will be following closely the progress to rectify this mistake in social justice. Fortitude be yours,”  noted Beth Clayton. 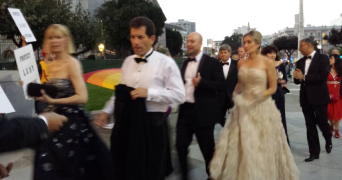 After the City Hall celebration a huge crowd of tuxedos, ball gowns, satin, silk, taffeta, trimmed with everything from lace, to pearls, sequins, embroidery, and ruffles descended on the Opera House, crossing a closed Van Ness Boulevard, and the first sight to greet them was our huge rainbow flag, signs that said “SUPPORT GAY RUSSIA” and an ornate music stand that held the “Letter of Solidarity” which had been signed by the star of the night, Ms. Racette and her partner Beth Clayton.

As the patrons flocked by, many stopped to read the letter and each and every person who stopped expressed gratitude, support and encouragement, some even taking the time to add their signature to the poster board upon which the letter of solidarity appeared.  Members of the San Francisco Opera and management from the Opera House, all expressed support for the vigil, coming outside to greet us and to thank us for the work we were doing.

As one of the organizers of the vigil, I must say I was very moved by the expressions of support, the multitude of ‘thumbs ups,’ including my favorite thumbs up of the night, which came from Speaker Nancy Pelosi, as she passed by our flag and signage.

Here is the letter, which has now gained over 100 signatures in just one afternoon:

We, the undersigned, stand in solidarity with Russia’s LGBT community at this time, due to the rise in violence against them, resulting from the Russian government’s recent enactment of anti-gay propaganda laws, and the government’s oppression of human rights defenders and activists.

Tonight, Friday, September 6, 2013, the opening night of the San Francisco Opera company’s season, we add our voices to the growing international chorus deploring the anti-gay propaganda laws and escalating attacks.

We are a diverse group of individuals from many backgrounds, countries and stations in life. Some of us are singers and performers, patrons and promoters of the arts, political activists, gays, lesbians, bisexuals, transgender people, straight allies and citizens of the world.

Together we believe it is of the utmost importance to dedicate ourselves, our performances, our hopes and prayers and wishes for a Russia that respects the human rights of all its peoples, including the LGBT community members.

100 Plus signatures and counting

“Today, a coalition of LGBT activists received a personal statement of support from openly lesbian opera mega-couple, Patricia Racette and Beth Clayton, in support of a letter of solidarity for Russia’s LGBT community as well as a vigil to be held at the opening of the San Francisco Opera’s MEFISTOFELE, starring Ms. Racette. https://oblogdeeoblogda.me/2013/09/05/opera-couple-patricia-racette-and-beth-clayton-to-support-lgbt-vigil-for-russia/

Thank you Bill Wilson for the Pictures: SEE MORE PICTURES

A must watch five minutes highlights from the Opera itself: