President Obama has chosen the official U.S. delegation to head to the Sochi Olympic Games in Russia. No POTUS, FLOTUS, VPOTUS, or any other OTUS.  However there will be one out athlete at the opening ceremony and another out athlete at the closing ceremony; Billie Jean King and Caitlin Cahow, both lesbians. Each represent sports the Russians enjoy and excel at- tennis and ice hockey. King has been an Olympic coach and Cahow is a two-time Olympic medalist. Billie Jean was one of the first out athletes back in 1981 and Cahow is probably one of the latest to come out just last month. We can only but wonder whether the two delegates will be willing to be spokespersons for LGBT human rights and whether or not they will seize this opportunity to speak out against the Russian government’s anti-gay laws and mistreatment of the LGBT community!

Billie Jean, a member of the President’s Council for Fitness, Sports and Nutrition, has long been a gay right’s advocate. She was awarded the Presidential Medal of Freedom in 2009 by President Obama for her work advocating for the rights of women and the LGBT community. Months ago she wished aloud to a USA Today reporter that she “was 21 again and in the Olympics.”

Well now she has her chance with an even better platform since a) she doesn’t have to follow athlete’s Rule 50 (no political propaganda permitted), b) the Opening Ceremonies has a huge viewing audience worldwide, and c) the International Olympic Committee has assured everyone spectators will not face discrimination and the Sochi organizing committee said there will be no repercussions for rainbow pins or other small gestures in response to the legislation.

It’s been 40 years since Billie Jean stood up for women and destroyed Bobby Riggs. It must be time to stand up for her community and criticize Putin et al.

And the gesture better be a lot more than an incidental pin or an incremental wave of a rainbow flag. 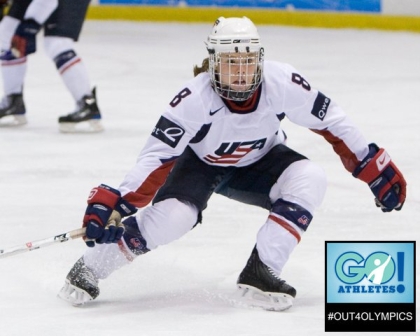 Perhaps I am more hopeful for Caitlin since I have read the rumored actions the U.S. Hockey Teams, both men and women, are planning. Caitlin did an interview last month for Out Athletes that was later posted to Huffington. She only spoke about the expectations on Olympic athletes, not our expectations of out members of the official delegation. Today she told USA Today Sports:

“It’s obviously a statement that’s being made, but I think it’s an incredibly respectful one. Basically, the White House is highlighting Americans who know what it means to have freedoms and liberties under the constitution. That’s really what we’re representing in Sochi and it’s not at all different from what’s espoused in the spirit of Olympiasm.”

Hopefully these two out athletes were not chosen as mere tokens of overtly known for being out, nor just for their propensity to behave, but hopefully they will seize the opportunity to stand up for LGBT communities, worldwide. And if NBC won’t interview them, go find those French journalists who promised today that they would cover Russia’s human rights abuses, homophobia & racism while at Sochi.

PUBLISHER’S NOTE: It is the opinion of the Publisher that the U.S.A. should refuse to go to SOCHI at all, to include athletes, delegates and sponsors. And hence the appointment of OUT LGBT sports figures mariginalizes what should be a stronger stand.