Italian media is reporting that former MP Vladimir Luxuria (the first transgender person to hold that office in Italy), was arrested in Sochi Sunday night after displaying a banner reading “Being Gay is OK’.

Earlier in the day, Luxuria had tweeted “I’m in Sochi! Regards with the colors of the rainbow, in the face of Putin!”

Later in the evening, Luxuria was stopped and arrested by the police for waving a banner that violated Russia’s so-called “gay propaganda” law.

News of the arrest came from Imma Battaglia, honorary president of The Gay Project, who reported “Vladimir has sent me a text message saying “Help me, I’m trapped, I’m alone. ‘”

Luxuria was reported to have received “brutal and aggressive” treatment and held for a few hours before being released. The arrest triggered the Italian “crisis unit” in Sochi. Italian Minister  of Foreign Affairs, Emma Bonino, tweeted “Staff: The ‘Crisis Unit is already active for the detention of Vladimir Luxuria in #Sochi”

Fabrizio Marrazzo, Italian spokesman for the Gay Center, reported “He sent me a text message, telling me that he was leaving the police station and he was fine. Tomorrow, however, will assist in the Games and will not leave the city.”

We will post any updates on this story here:

MP Luxuria was arrested again today whisked away by Olympics officials as she was heading in to see a Women’s Hockey event. Luxuria did not have a banner or sign, just a lovely rainbow outfit with matching wig! Reports say she was shouting “it’s okay to be gay” in both Italian and Russian. OBLOGDEE approves! And we can’t wait to see how Billie Jean King tops this! 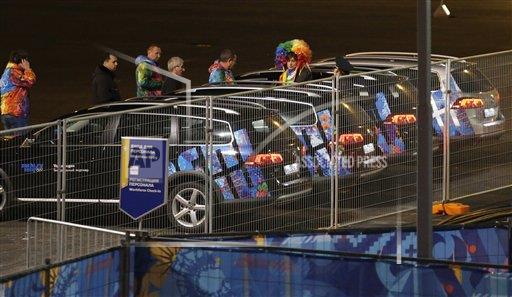