You are here: Home » NPR Talks About Uganda Anti-Homosexuality Bill Impacting Asylum to the U.S.A.

‘A Lot Of People Are In Panic Mode’ 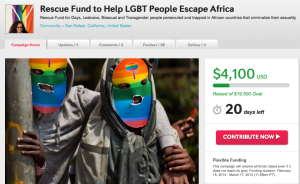 Today this report appeared on NPR Radio. “But winning asylum in the United States is no easy feat. Granted, the U.S. has recognized LGBT status as grounds for asylum since 1994, but the government keeps no records on how many claims it grants.

“It’s an unconscionably hard process to seek asylum in the United States of America,” says Melanie Nathan, a California-based lawyer who works on behalf of LGBT asylum seekers. She says it’s virtually impossible for someone to knock on the door of a U.S. embassy abroad and ask for and receive asylum.

“So what happens is, they come to America on other types of visas. They come to America on workshop conference visas, on visitor’s visas,” she says. “And once they are here, people have a year to apply for asylum. The average person — especially younger people in Uganda, for example — will never get that initial visa and don’t have money even to fly here.”

Still, based on her social media contacts in Uganda, Nathan estimates anywhere between 2,000 and 3,000 gay Ugandans will seek asylum in the U.S. or other countries.

Nathan says she has what she calls her “Schindler’s List” — “people that have been trying to escape.” Since the signing of the new law in Uganda, “my phone has been going crazy, my messages have been crazy,” she says. “A lot of people are in panic mode right now.”

For its part, the Obama administration calls the new Ugandan law “more than to the gay community” there. And in a statement, Secretary of State John Kerry has called for a repeal of the law.

“We are beginning an internal review with the Government of Uganda to ensure that all dimensions of our engagement, including assistance programs uphold our anti-discrimination policies and principles and reflect our values,” ”

SEE FULL NPR ARTICLE AND HEAR THE REPORT AT http://www.npr.org/blogs/parallels/2014/02/26/282568084/gays-and-lesbians-seeking-asylum-in-u-s-may-find-a-hard-road?utm_content=buffer60aa1&utm_medium=social&utm_source=facebook.com&utm_campaign=buffer