On January 27, 2011, the most outspoken gay rights advocate in Uganda, at a time when the country’s Parliament was considering a bill to execute gay people, was murdered. Today the LGBTI Ugandan community and global activists around the world, remember David Kato Kitsule  and his untimely passing.

Kato  had received a stream of death threats.  A few months before his murder, a Ugandan newspaper ran an anti-gay explosive rant, outing gays, with Mr. Kato’s picture on the front page under a banner urging, “Hang Them.”

Kato was beaten to death with a hammer. Police officials were quick to chalk up the motive to robbery, but members of the the LGBT community in Uganda suspected otherwise. A perpetrator was caught, tried and sentenced to 30 years in prison:

“Accused murderer Sidney Nsubuga Enoch, a male prostitute, was found guilty and sentenced to 30 years in prison on 10 November 2011 by Mukono High Court judge Joseph Mulangira. US activist Melanie Nathan, writing to the San Diego Gay and Lesbian News, called the prosecution’s rendering of events leading to the murder as “a cover-up of the actual facts and events leading up to Kato’s brutal murder”. (Wikipedia)

According to the New York Times: “David’s death is a result of the hatred planted in Uganda by U.S. evangelicals in 2009,” Val Kalende, the chairwoman of one of Uganda’s gay rights groups, said in a statement to the New York Times back in 2011.  “The Ugandan government and the so-called U.S. evangelicals must take responsibility for David’s blood.”

One such U.S. Evangelical being referred to is Scott Lively, who is now being sued by a Ugandan organization, represented by the Center For Constitutional Rights, in a case in the U.S. Courts, under The Alien Tort Act, for crimes against humanity, after Lively’s alleged actions leading to the persecution of LGBTI Ugandans.

“Its a sad day in our lives, our struggle days and our future days. Today in time we celebrate the life and works of the late David Kato Kisule. You pioneered the sexual minority struggle in Uganda though you didn’t live to enjoy the fruits of the liberation you started. We are  sure wherever you are, you are smiling; we have not betrayed you and your legacy will reign as more and more of us your grand children step on the throne to claim for our space.” 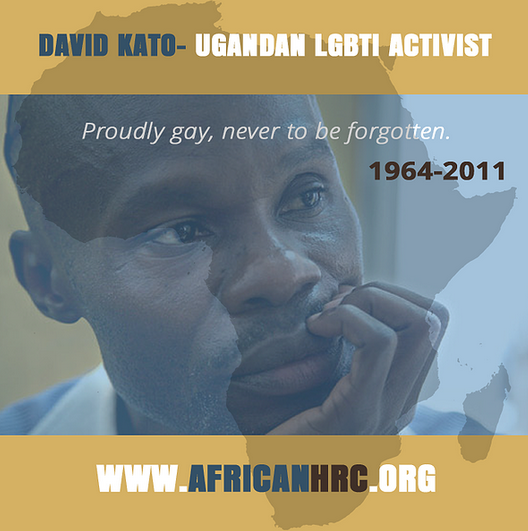 GUILTY – Giles Muhame of Rolling Stone Magazine – who outed and promoted “hang them” line in his expose of gays in Rolling stone, featuring David Kato.  Muhame, whose tabloid could not survive the lawsuit brought and won by David Kato,  is now Editor at Chimp Report, Uganda. 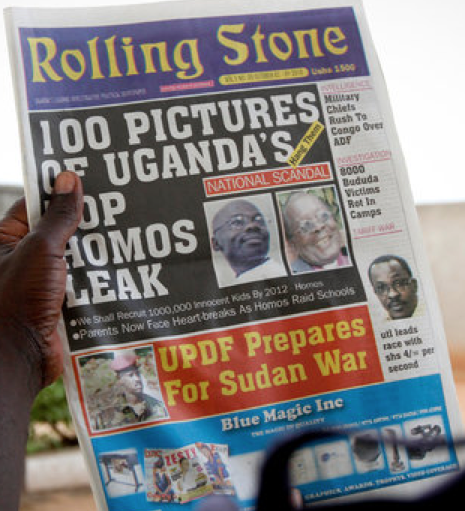 8 thoughts on “Ugandan Activists David Kato Never to be Forgotten”