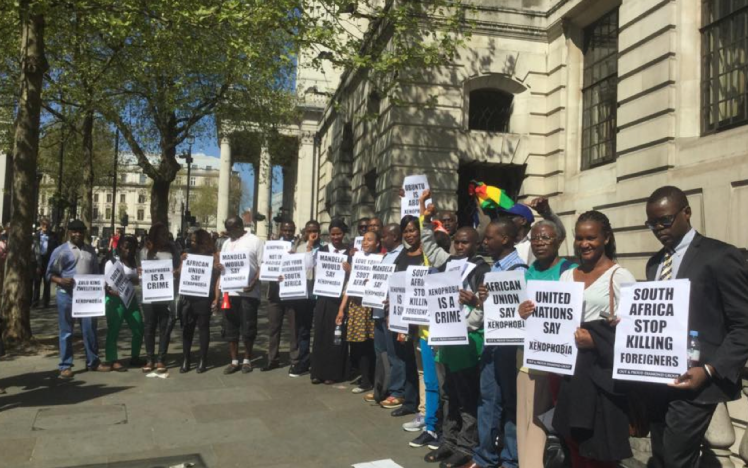 Protests calling for the South African people and government to bring an end to xenophobic attacks, riots and murders are taking place around the world. The African LGBTI group Out and Proud Diamond Group, (OPDG) based in London, organized a protest in London at the South African High Commission, Trafalgar Square.

Edwin Sesange, Coordinator of Out and Proud, announced the group’s appeal:

We are calling upon the people of South Africa to work together to bring an end to xenophobic violence against fellow Africans – and for the South African government to do more to stop these attacks by protecting immigrants and arresting the perpetrators.

We urge the South African government to address the social-economic problems that are being used as an excuse for anti-immigrant pogroms – and for political, cultural, religious and ethnic leaders to speak out in support of African unity and solidarity, against all hate and victimisation.

We appeal to the police, security agencies and courts to bring to justice the people committing these xenophobic assaults.

We are also calling on  the African Union to speak out and pressure South Africa to stop the violence.”

Many foreign African nationals in South Africa have lost their lives through mob violence. Their properties have been set ablaze and looted. Many more have been badly wounded. Thousands are still in fear for their lives due to the xenophobic attacks from some South Africans.

South Africa has come very far from the dark days of apartheid. People across across Africa and around the world worked together to support the South African freedom struggle and create the new Rainbow Nation.

Many people, such as Zimbabweans and Congolese, have fled to South Africa as immigrants to escape persecution in their countries of origin. Others have gone there as entrepreneurs, among other reasons.

It is of great concern to see  how the Rainbow Nation is under threat through deadly xenophobic attacks against innocent immigrants.

The new South Africa was built on the foundation of Ubuntu: tolerance, diversity, acceptance, equality and togetherness. We defend those noble values.

We accept that there are many social and economic problems in South Africa. However, these can be challenged and overcome without turning to violence. There is no justification for xenophobia and mob attacks on the innocent.