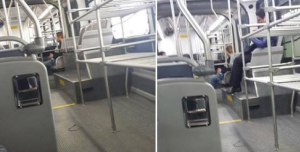 ere is my Facebook Status from my experience at Boston’s Logan airport, yesterday:

How many times have you been at an airport when they ask you to report unattended bags? repeatedly? Non Stop! Right? Each time you hear that announcement – surely you think that unattended bags are a security risk?

Well here I am on an AIRPORT bus changing terminals at Logan Airport Boston. This is the very week that the Boston Marathon bomber guy is all over the news about to be sentenced….. Anyway, there are only 3 of us on the bus when a person gets off the bus and leaves a big black bag, unattended.
The Bus Driver asks – “Is that anyone’s bag?” No response.

YES – the bag is unattended.

Nosy neurotic me says to bus driver – “Should you call security.?” No response!

About 3 stops later he calls in to report a “lost” bag. I feel my heart skips a beat. I am afraid. I think sheez – he is not taking care of us – WHAT IF ITS… the unspeakable?

Should I stay on this bus and risk being an errr…. casualty?

Am I overreacting? Do I get off? Will I find another bus to get me to my terminal?

The driver never ever called security and whomever he mentioned it to on the radio did not call security either!!!
OH my!

After about 10 long minutes on this damn BUS – which felt like 30 minutes and several announcements later: “This is terminal A” .. we stop and more people embark.

“This is terminal B1” – people embark and

Finally my terminal – B2 I disembark – I was safe… I think WTF America wake up!! That could have been it. – I felt terribly unsafe… and whats the point of all those “please report unattended bag announcements?”..

Maybe the driver was certain that bag was safe. But I did not feel safe – and that was because of all the announcements we hear non stop. And because I am fully aware that we may be indeed under threat at airports.   So I think the Bus driver should have immediately stopped the bus and asked us to disembark – ordered a new bus for us. I think security should have been called to examine the bag on the bus – immediately. Well I dont know the protocol – but all I know is I sat on that bus for at least 10 minutes with a bag that could have had a bomb on it. Am I overreacting? Should I have asked to get off? URGH!!! #Confused!

2 thoughts on “Logan Airport Security Are we Safe”