A Prayer For Uganda 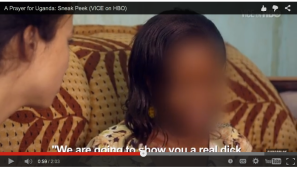 The plight of the LGBTI community in Uganda may be seen to have tapered down in the headlines and people may be seen to be complacent. But many LGBTI refugees are still showing up in Kenya with horrific stories of persecution in Uganda.

This issue of such persecution in Uganda against LGBT people is explored in the latest episode of VICE on HBO, by reporter Isobel Yeung.

Yeung met with anti-gay activists preaching intolerance to schoolchildren–and shows how that manifests as full-blown hatred among adults. “Tell us something about Ugandan culture,” Yeung asks one man in Kampala. “The first thing we hate is homosexuality,” he responds. Yeung interviews a lesbian who has been forced into hiding after suffering horrific violence.

African Human Rights Coalition is providing case support with safe shelter and in some instances strategies for exile to people in African countries, including Uganda, with similar stories, as we receive constant reports of similar abuse, torture, so called “corrective”  rape, some even at hands of family and police.

In the Vice episode the woman’s face is disguised, and she recalls how, walking home one night, she was accosted by a group of men. They told her they knew she had a girlfriend and that she was not “a real woman” before raping her and leaving her pregnant.

VICE also explores the disturbing role Americans have played in stigmatizing homosexuality–not just anti-gay extremists like Scott Lively, the Evangelical pastor who compares homosexuality to pedophilia, but supportive U.S. politicians and even senators.

The episode, “A Prayer for Uganda,” is available on HBO from Friday at 11 p.m.  It is important to note that the same persecution is being experienced by LGBT people in very many African countries.

TO DONATE TO UGANDAN REFUGEES IN KENYA and Safe Shelter: https://www.indiegogo.com/projects/lgbti-refugee-relief-fund-6–2