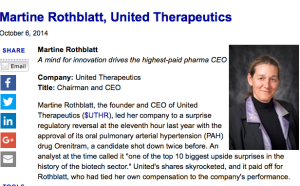 In 1995, Martine Rothblatt, a trans American lawyer, author, philosopher and entrepreneur published “The Apartheid of Sex,” a brief manifesto that made the case for an overhaul of “dimorphic” (her word) gender categories.

New York Magazine , in a must read feature on Rothblatt, quotes her as saying:

And the article goes on to note:

Gender identity seems to be captivating several of the U.S. State legislators in a manner that is contrary to the fluidity and liberality it could so easily command and as suggested by Rothblatt.  Instead legislators and governors are forcing an issue that denies people their freedom and authenticity, through emerging hateful laws and punitive measures, which not only defy the realities of the lives of so many, but only serve regression and degradation.

The LGBT community itself probably lags the progressiveness of the Rothblatt theory, as many gasp for tolerance, perhaps a desperate way of dealing with backlash.

And then this happened:

In these past weeks, we have been gripped by a countrywide outrage at the passage of several anti-LGBT State laws, with one of the worst, HB 2, the Public Facilities Privacy & Security Act, signed into law by North Carolina’s Governor Pat McCrory.

This egregious and regressive new law requires transgender people (and everyone else) to use public restrooms according to the biological sex on their birth certificate. It also bars local governments from passing ordinances like Charlotte’s, which protects LGBT people. And so people who have transitioned to their authentic gender, not to mention the gender-fluid, must assume their ‘dead-gender’ for the purpose of restroom use. And we all know what that LOOKS like!.

So here, while considering Martine Rothblatt, is the interesting collision:–

Back in 1990, Jenesis, Martine Rothblatt’s young daughter was diagnosed with primary pulmonary hypertension, a rare and incurable disease that constricts the blood flow in the arteries between the heart and the lungs.  Rothblatt, who made a considerable sum of money, founding Sirius Satellite Radio, embarked upon finding solutions to save her daughter. She sold much of her Sirius shares and with three million dollars created the PPH Cure foundation.

As there was only one drug available to treat the disease, an uncomfortable 24 hour intravenous drug by GLAXO, Rothblatt started a new pharmaceutical company, United Therapeutics which went public in 1999, trading at $12 a share. She was able to find another drug that had been shelved, due to the fact that so few people were impacted by the disease,  and pursued its development.

After much perseverance and two failed attempts by United Therapeutics at approval, the FDA finally approved the previously shelved drug in a pill form, causing the company stock to shoot up to $114 a share, in mere days. An analyst at the time called it “one of the top 10 biggest upside surprises in the history of the biotech sector.” United’s shares skyrocketed, and it paid off for Rothblatt, who had tied her own compensation to the company’s performance.

By 2014 UT had a staff of 729 and a $5.34 billion valuation and Rothblatt became the highest earning CEO in the Pharma sector, and highest earning female CEO, with a compensation package of $38 million.

As it happens United Therapeutics (research offices*)  are in the biotechnology epicenter of North Carolina, the State that now hosts the most discriminatory and horrendous anti-Trans law in the land.

According to Biz Journals, United Therapeutics received permission from Durham, North Carolina, to build a 275,000-square-foot medical laboratory on land the company owns in Research Triangle Park. The Triangle Business Journal reported in 2012 the plant would have the capability of producing up to 1,000 sets of healthy pig lungs — known as Xenolungs — annually from genetically-engineered pigs, a project promising future medical solutions. In 2014, United Therapeutics invested $50 million in equity in the California company Synthetic Genomics Inc. to further its North Carolina-based research and development. United Therapeutics made another $50 million investment in SGI in September 2015.

And now in the midst of this astounding progress, all at the behest of one genius visionary, who happens to be a Trans woman, the Sate legislature, in essence, defecates on the honor to house this accomplished enterprise, with its inane unwelcoming regressive legislation, that ironically personally and directly disavows the visionary responsible for its brilliance.

While some may earn more and others less, there is no disparity in insult when it comes to transgender and gender fluid people in North Carolina at this time. Whether you earn $10 per hour or $38 million per annum, the anti-Trans law, will not discern.  And as bad is that vicious slap in the face to progress and genius.   In effect its not only gender identity we are seeing denied, or the right to be fluid, or the right to label our spectrums by color, but also progress, through systemic degradation which happens to impact and hurt many artists, professionals, business leaders, managers, laborers and as it happens, included in there, is one of the most enlightened thinkers and extraordinary entrepreneurs of our time.