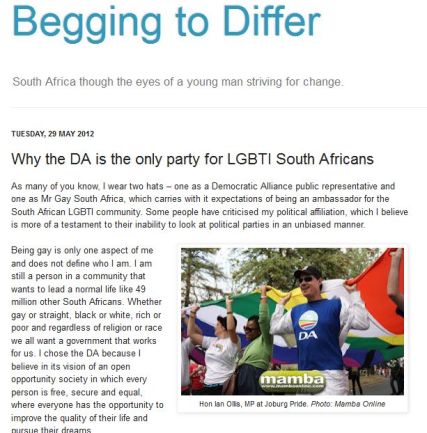 In 2011 Lance Weyer won the Mr. Gay South Africa Pageant.  With the win the pageant owners declared him The Ambassador for South African LGBT Rights.  However Weyer is a career politician who was chosen by the Democratic Alliance, a political party to a career position as a Town Councillor. Weyer has allowed his party affiliation to trump his ambassadorial designation for LGBT rights in South Africa, with an overt display and enactment of conflicting interests.

Lance Weyer could be seen to be using his title, Mr. GAY S.A. as a springboard to further his political ambitions rather than to provide pure activism or representation for the LGBTI community. This has become evident from a multitude of factors. (That is presuming a beauty pageant winner in an elitist competition can be an ambassador for all in the first place.)

Weyer uses his facebook page to communicate and interact with Mr. GAy S.A. fans and the LGBTI community in South Africa and he uses that same FB page (see screenshots below) to criticize the South African ANC ruling Government. That in and of itself would be fine as all good activists should be critics of government; however he then goes on to solicit fans to his BLOG via his posts of the Blog on the Facebook page.  In his Blog he is preaching to the South African LGBTI community to vote for the opposing political party as being “the perfect party” for LGBT South Africans.  Now while that may seem to be fine, Mr. Weyer just happens to be a career politician who was “selected” and “appointed” by that same opposing party to his current paid job. Mr Weyer is using his title to tout for the DA.

His Facebook page and BLOG  post deals extensively with promoting his political party, instead of the pure focus of LGBTI issues. While being in favor of a party is one’s right and promoting a party is one’s right, in this instance it is a clear conflict of interests as it subverts his authenticity when it comes to dealing with member of both sides of the aisle.

It is impossible to be this so called “ambassador for LGBTI rights in South Africa” while choosing and actively promoting a political side, without running the risk of a serious conflict of interests, especially when one depends on the side one has chosen for one’s living.

Weyer has done this without shame.

In a recent Blog he writes:

“As many of you know, I wear two hats – one as a Democratic Alliance public representative and one as Mr Gay South Africa, which carries with it expectations of being an ambassador for the South African LGBTI community. Some people have criticised my political affiliation, which I believe is more of a testament to their inability to look at political parties in an unbiased manner.”

While he suggests in the opening paragraph of his blog that criticism of this conflict is a testament to a critic’s inability to look at political parties in an unbiased manner,” he proceeds to use the same BLOG post to provide an extensive biased list as to why the LGBTI community should ONLY support HIS political party, the Democratic Alliance Party.

“Being gay is only one aspect of me and does not define who I am. I am still a person in a community that wants to lead a normal life like 49 million other South Africans. Whether gay or straight, black or white, rich or poor and regardless of religion or race we all want a government that works for us. I chose the DA {Democratic Alliance}because I believe in its vision of an open opportunity society in which every person is free, secure and equal, where everyone has the opportunity to improve the quality of their life and pursue their dreams.”

I mean really! Does he take you all for fools? Here is a career politician who is clearly using his Mr. GAY SA Title to promote his party.

Recently Weyer made contact with the Department of Justice, through a letter of excuse himself after being reprimanded by the DOJ for remarks he made that the DOJ asserted were untrue.  Weyer then set out his excuse for the remarks and in the very same letter proceeded to ask the  DOJ questions relating to the Take Team on hate crimes, seemingly on behalf of the LGBTI community. His pointed questions were not only out of line in terms of protocol and context, but also carried a sniff of party politics. Was he asking as a member of the DA or as a member of the Gay community?

Well if I were the DOJ and looked at his FB page I would refuse to answer him and deny him any authority or representative capacity for the LGBT, because he is such a vocal political critic wearing a DA hat. In the latter event if acting on behalf of the DA, then those questions should be channeled through his leadership and not directed by him.

Oy vey, what a mess!

How can the the ANC led department of Justice answer those questions and work with Weyer  when all over his Facebook page he does nothing much more than mock and criticize the government that he thinks he can work with on behalf of the LGBTI community?

He cannot use his Mr., GAY S.A. fan base and social media to put down the ANC, touting that the DA is a better party for gays,  and then pretend to try and work with the ANC as an activist. He cannot pretend for one second longer that there is not conflict of interest.

Note the screenshots of Weyer’s Facebook page where he uses the Mr. GAY S.A. logo and shirtless muscle bound picture as his profile picture as well as screen shots from the same FB page showing how he criticizes the ANC which is the ruling Administration of the Department of Justice and Constitutional development?

As I have said before on these pages – activists and ambassadors for a minority community cannot be career politicians with affiliations, tout their own party’s superiority and then purport to work for everyone. It just cannot work. So yes while its fine to be a critic sometimes Lance Weyer you simply cannot wear more than one hat and get away with it!

AND while the above exhaustive list goes on to provide very valid attractive reasons for gays to support the DA, Weyer fails to impartially provide voice to anyone from the ANC in his BLOG to provide any counter argument to our Ambassador’s suggestion that the DA is best for GAYS!  And worse yet, in the opening paragraph of this same BLOG  he invalidates his critics for bias!

What makes this even more irresponsible in the life of  the LGBTI ambassador is the fact that Weyer wrote this piece  “BEGGING TO DIFFER Why the DA is the only party for LGBTI South Africans” in the midst of the LGBT Constitutional crisis – when Traditional leaders are discussing the revocation of LGBT equality from the constitution – during a call and a time for unity – not party political politicizing.

Could this be anything but a clear attempt to score points with his party, persuade the LGBT community to vote DA and to enhance his career.  Where is the LGBTI rights ambassador in this? He loses all credibility with his politicking! Resign Lance Weyer from the Mr. GAY Ambassador farce and pursue the great political career you are clearly becoming a great politician!

Facebook  Screen Shots: You will note that he is touting his title as Mr. GAY SA and then speaking with a DA Voi 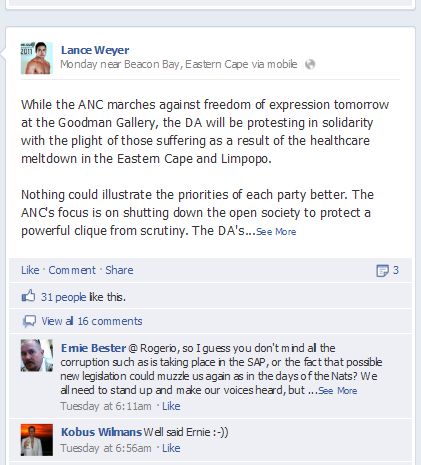