While Two-Thirds of America’s National Parks are Dedicated to Culturally & Historically Significant Sites, Struggle  for LGBT Equality is Not Recognized 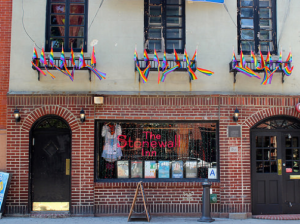 The national campaign launch has been organized outside of the historic Stonewall Inn and Christopher Park, in New York City’s Greenwich Village, where the modern LGBT equal rights movement began in the summer of 1969.  As part of the lead up to the national launch, elected officials representing all levels of government in New York have sent the first letters to President Obama requesting the designation of a Stonewall National Monument. Organized by Congressman Nadler, the list of officials announcing their support includes U.S. Senators Gillibrand and Schumer, eleven Members of Congress, thirteen New York State Senators, 37 New York State Assembly Members, five New York City Council Members, as well as the New York City Comptroller, Public Advocate, and Manhattan Borough President.

“We have a responsibility to preserve and respect the places important to our history, and the Stonewall Inn deserves our highest recognition,” said Senator Gillibrand. “Victories like the repeal of Don’t Ask, Don’t Tell, the passage of marriage equality in New York State and the final, decisive Supreme Court ruling securing our freedom to marry, were borne from the modern equal rights movement launched at Stonewall. It’s time for a national monument honoring the legacy of people and events that took place here.”

“The legacy of the Stonewall Rebellion mirrors that of our nation: a group of individuals standing together against all odds to demand their freedom,” said Congressman Jerrold Nadler (NY-10). “As the struggle to ensure equality for all continues, I am proud to stand with this coalition to remember the spark that launched the LGBT civil rights movement. We urge President Obama to designate the first ever National Park Service site dedicated to the history of the LGBT community, so that this story may be preserved and retold for future generations.”

Two-thirds of America’s more than 400 national park sites are dedicated to cultural and historic significance. Women’s Rights National Historical Park in Seneca Falls, New York tells the story of the first Women’s Rights Convention held there in July 1848, and the struggle for equality and civil rights. Selma to Montgomery National Historic Trail in Alabama, a national park site, traces the march led by Dr. Martin Luther King Jr. in the struggle for equal voting rights for African Americans. A national park at Stonewall would tell the story of the LGBT community’s fight for equal rights in America, and is integral to fully incorporating the diverse range of LGBT experiences into our nation’s history. The events that happened around Stonewall honor unique stories of American history and its legacy is a part of the push for human rights and civil rights in the United States.

“The resounding support for this effort underscores that it is time to have a national park site that tells the story of the LGBT rights movement – one that should be told for decades to come,” said Cortney Worrall, Northeast regional director for the National Parks Conservation Association. “We must continue to protect and preserve these places, urban and rural, natural and historic, that speak to and represent who we are as a nation. And by the best storytellers in the business – the National Park Service.”

“A national park–we who had to keep the most central part of our souls hidden in shame will now be celebrated as full human beings,” said Stonewall uprising witness Martha Shelley.

Uniquely and importantly, a national park in Greenwich Village would invigorate historic preservation of LGBT history in the neighborhood. The call to designate the nation’s first LGBT national park site around Stonewall enjoys tremendous local and national support.

“The Stonewall Uprising wasn’t just a catalyst for the LGBTQ civil rights movement – it signified a watershed moment in the history of American social justice,” said New York City Comptroller Scott M. Stringer. “We are here today united behind the movement to create the first national monument designated for its significance to LGBTQ history. Now is the time for Stonewall to take its place alongside the many other places of deep historical significance in New York City.”

“The Stonewall Rebellion marks a pivotal moment in our nation’s ongoing struggle against prejudice and injustice. After our successful push this summer to make the Stonewall Inn a New York City landmark, it’s time to recognize the national significance of this site. Our fight for equality is far from over, and we must preserve this symbol of courage and perseverance for generations to come,” said Public Advocate Letitia James.

“The Stonewall Rebellion is a rarity – a tipping point in history where we know, with absolute clarity, that everything changed,” said Manhattan Borough President Gale A. Brewer. “This site has a unique place in American history and the struggle for dignity and equal rights in our society, and would be a fitting site for the country’s first National Monument dedicated to the LGBT community.” 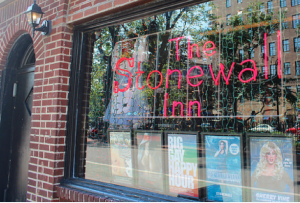 State Senator Brad Hoylman said: “I’m grateful to Congressman Jerrold Nadler and NPCA for leading the effort to designate Stonewall Inn as a National Park. I’ve been proud to work with them to help build support from the local community, alongside Borough President Gale Brewer, Assembly Member Deborah Glick, Council Member Corey Johnson, and Community Board 2. For me personally, as a gay dad, it’s reassuring to know that if we succeed, we will have helped safeguard the birthplace of the LGBT civil rights movement for my daughter’s generation and beyond.”

“The fight for full equal rights and recognition of the contributions of the LGBT community has been a long struggle. The creation of a National Park dedicated to LGBT history is a big step toward validating the significance of these hard-won rights on national scale. I am even more thrilled that such a place would be proposed within my district,” said Assemblymember Deborah J. Glick.

“The Stonewall Inn and its surroundings occupy a sacred place in American civil rights history,” said Council Member Corey Johnson. “By granting this area National Monument status, we will be preserving its legacy for generations to come, giving Americans the opportunity to connect with the important events that occurred there in 1969. We must preserve the physical features of this historic place and protect it as best we can over the coming decades. My deepest gratitude goes to Senators Charles Schumer and Kirsten Gillibrand, Congressman Jerrold Nadler, Senator Brad Hoylman, Assembly Member Deborah Glick, the National Parks Conservation Association, Community Board 2, and all the advocates who have pushed so hard to ensure the preservation of this vital LGBT landmark.”

“Memorializing the historic events that occurred at Stonewall goes a long way towards validating the struggle, and sacrifice of self, that many in the LGBTQ community made then and continue to make now,” said NYC Parks Commissioner Mitchell J. Silver, FAICP. “Let’s make history again, nearly 50 years later.”

“A never dying light needs to shine here because it is a place of liberation. Community Board 2 is confident the residents and businesses here will help this light shine in a way that also helps make this an even better place to live and work and visit,” said Tobi Bergman, Chair of Manhattan Community Board 2.

“At a dark time in our nation’s history when LGBT Americans were targeted, marginalized, and oppressed by almost all of society just because of who they were, the brave individuals who stood up at Stonewall and said enough is enough sparked a movement to end unfair and unjust discrimination against LGBT people – one that we’re unfortunately still fighting today,” said HRC Government Affairs Director David Stacy. “A Stonewall National Monument would pay tribute to the bravery that has made possible the pro-equality achievements we enjoy today, help tell their incredibly important stories, and continue to inspire fair-minded Americans across this country to stand up for equality. We’re proud to join with national, state, and local advocates in this effort to honor our history.”

Learn more about the push to create a national park for Stonewall and add your support by signing the petition at: www.npca.org/natlparkforstonewall.

Join the conversation online with #NatlParkForStonewall