WBUR – Interveiw with Lively and Kaoma about Ugandan Gay Rights Group Lawsits against  Springfield Evangelist Scott Lively | See VIDEO where Lively calls for death of gays in Springfield outside his Coffee Shop.

What’s my opinion of Scott Lively and his reign of persecution?  That’s easy.  Who better than a proselytizing evangelical who moved to our Commonwealth to “re-Christianize it” to project his own recruitment and promotion approaches onto a group that does no such thing.  Christianity is a choice, a choice Scott Lively is hoping many in Springfield will chose by falling prey to his promotion and accepting his recruitment to follow him.  Queerness is not a choice.  It is just an attribute we are born with yet one he finds worthy of his persecution…

So when I got an email Thursday that Scott Lively was going to be on our local NPR station, the Radio Boston program of Boston University’s WBUR, I thought I’d best listen and report on it.  But this blog post is a bit delayed as is often the case when I suffer from hate overload dealing with Scott Lively.  I tried listening to his interview when it aired but only made it 11 minutes in.

Just a few days before I was in Springfield’s Federal Court listening to much of what he did in Uganda against their LGBTI community in the SMUG v. Lively Crimes Against Humanity case.  On this day, after the radio host played a particularly heinous clip from the now infamous 2009 gay agenda workshop in Kampala, Lively accused the host of cherry picking.  But when I heard the recorded Lively saying “they are so far from normalcy” I was reminded of a comment I had seen from Jim Burroway a couple years back : ‘Is it any wonder Ugandans want to kill gay people?‘.  Perhaps Jim was cherry picking too.  But I doubt it.  He had the full tapes.  It is the totality of the lies and propaganda of Scott Lively not a couple of comments taken out of context as he likes to claim.

Earlier in the week Pam Spees, lead counsel for SMUG, had spoken with the on Radio Boston explaining how Lively had advised “criminalizing advocacy and association.”  Lively on this day of course feigned ignorance claiming an “Awful lot of exaggeration going on… all hyperbole… there has been some police activity according to these activists.  There’s been no corroborating support for their allegations that these meetings have been disrupted and things like that…” which must be interesting to SMUG who was in court in Uganda also this week for their case against the Minister of Ethics for one of those illegal workshop raids!

When asked why he went to Uganda in the first place Lively began with the old claim of:

“Well let’s get right down to the reason that they held the conference in the first place.  It’s really to come against gay sex tourism taking place in Uganda.  You have primarily male homosexuals from the United States and Europe going into Uganda… uh… and with just a few dollars or a bicycle or a cell phone… uh… turning these impoverished teen and pre-teen boys… uh… into male prostitutes.  The country’s outraged about it.  They wanted to protect some kind of law to protect their children.  And that’s what this law was.”

So, apparently it had nothing to do with the heinous lies and propaganda he told them, or the incessant urging from him to criminalize all of the gay community’s activity.  You know because “This isn’t some science fiction movie of perfectly innocent people being harassed for no reason.”  But they are perfectly innocent people just trying to live their lives without the persecution wrought by Lively and his ‘nuclear bomb’ so I am confused.  His own bragging is here. 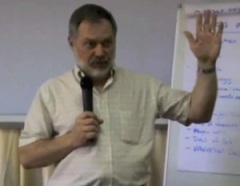 When clips of the 2009 workshop are played starting off with the now infamous quote of “the gay movement is an evil institution whose goal is to defeat the marriage-based society and replace it with a culture of sexual promiscuity” Lively just shrugs it off saying “any movement that is attempting to legitimize sexual perversion is an evil movement”.  And then at the part where Lively says of gays “they are so far from normalcy that they’re killers” Lively decries ‘cherry picking’ and claims that he was “describing a spectrum of gender identity” and goes on to accuse the host of “radio propaganda”.

For me I have to wonder of the Ugandan audience – who knew nothing on the subject of homosexuality and were taking it all in like sponges – how they could be expected to pick up on Lively’s nuanced descriptions of his claimed small faction of gays or have any idea what a ‘spectrum of gender identity’ even is!  No, I think Lively knew just what he was doing and the interviewer was right to call him on it.  And I would argue the small faction is of all people nothing to do with orientation.  Ask the people of Sandy Hook or Tucson.

Lively goes on to say the he believes “homosexuality is something that should be discouraged by society” and that he is against “taking the behavior, and mentality and philosophy of a sub-culture and attempting to completely re-shape the mainstream society to suit that special interest’s goal”.  But isn’t that what he’s doing trying to re-Christianize Springfield?

The second guest on the show was Reverend Kapya Kaoma, originally from Zambia,  now from Somerville MA, who attended that infamous Lively 2009 “Gay Agenda’ workshop.  Kaoma started his comments off with:

“Scott, when you were in Uganda …. I’m disappointed you can even claim to the public that you didn’t promote hatred in Uganda.  You spoke convincingly to people of Uganda. You told them that the country should have no tolerance what so ever on gay rights, in fact it’s you own way to say we shouldn’t have any tolerance. Zero tolerance homosexuality. That’s what you say. …  The second part is you also boasted on your own blog, Defend the Family blog, you said your meeting in Uganda created almost, you compared this to, a nuclear bomb against gays.”

When confronted with someone who was actually there Scott Lively could only counter with:

“I make a very clear distinction and always have between people whom I love and… and… and don’t want any harm to come to and the philosophy and the public policy ideas that they are advancing.” 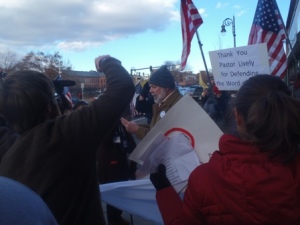 I have to tell you for me personally his actions on many occasions don’t seem to fit the whole ‘love the sinner, hate the sin’ defense he claims. I feel qualified to say this because I have stood only a few feet from him, when I took this photo, while he read Romans 1 to us, The Stop The Hate and Homophobia Coalition, with extra emphasis on 1:32 “…they which commit such things are worthy of death,” –  you know that piece of scripture people like him use to justify the execution of gays.  How can you on one hand want people executed yet on the other wish them no harm?

Kapya continued his on-the-scene recollections with “But when Scott Lively went into Uganda… one thing he did very well is to preach to the audience, not just in Uganda, but also to everyone that was listening among them the Parliamentarians. He went into the Parliament of Uganda for instance.  He spent with them over 4 hours talking to them saying .. “  Lively interrupts claiming half an hour!

That to me was odd because I could have sworn his lawyer claimed he never met with any members of Parliament just a few days earlier in the court at the oral argument hearing in SMUG vs. Scott Lively.  Kapya continued that:

“After he [Lively] left Uganda. I remained in Uganda.  There was what they called a ‘strategic meeting’ to combat homosexuality in Uganda. During that meeting we were even told by people how afraid they were because of what they heard from Scott Lively and they vowed in that meeting that they are prepared to do everything possible to get the gay out of Uganda.”

“Because in Uganda it was not just about preaching the gospel, it was about asking them to take radical steps to stop the international homosexual agenda. And it was said clearly that no country on Earth has been able to stop them but I want I hope Uganda will.  That’s what Scott Lively was saying. So to lie, to even say it’s about freedom of expression.  It is about freedom of expression, but yes, but words have consequences.  And when you try to demonize another person.  In this case the gay community in Uganda.  Scott wants to present them as if they are this power group but they are not at all.  The gay community is so vulnerable.  Most of them are unemployed.  Most of them are being rejected by their families.  Now to define them as demons, or certain strange characters based on what you just played that makes people so worried.”

After some bantering with Lively, Kapya continued: “You lied to the community of Uganda that gays are there to recruit young children. That they are coming after your kids. You must stop them.”   At that strategic meeting Kapya heard: “Where it was even said that, that they needed guns. Those are the words of one of the pastors.  We need guns to stop the international gay agenda from taking over Uganda.”

There was a glimmer of hope for me when the host asked Lively “Wouldn’t you be helping the society more to… to… to encourage them to be tolerant?” But of course the hope dissipated quickly when he replied “All of the context is a positive context from a person who comes from a biblical world view”.  Wonder if he is traveling the world advocating death for people who eat bacon, or people who are divorced (I hope he starts with the hypocrites in his own religious faction), both of which are also abominations but those examples shellfish, polyester, … are too easy.  But as Kapya said “there is nothing in the Bible which allows you do demonize another person.”

Mouthing calls for death to gays:
Editor’s Note: VIDEO –  From refs point 4:45 of this must watch video taken by Joe Oliverio, you will note Scott Lively preaching that Gays “deserve to die.”  Here is the proof of his lie. Lively repeatedly states that he has never called for the death of gays.  Here is proof of the call for death to homosexuals which is something he cannot deny and get away with.