You are here: Home » SA Lesbian minister has her day in court

SA Lesbian minister has her day in court 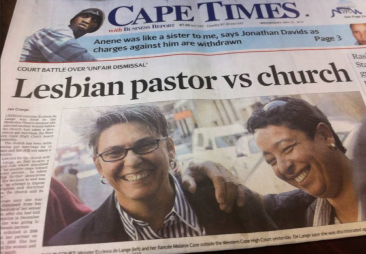 We reported earlier this week about the impending case before the Cape Town High Court of Lesbian minister Ecclesia de Lange, who was fired by the Methodist Church because she married a woman, before the church had taken a decision on same-sex marriage. The case was heard through the presentation of argument on Tuesday and the Judge will rule in the next few weeks.

After 13 years, The Methodist Church of South Africa is still deliberating its stand on same-sex marriage, with ironically a Synod this very week of the minsiter’s trial.

Lawyers for the church said De Lange, 43, had broken a church rule which stipulated that “no positive steps toward same-sex unions… be taken pending further determination”. According to church counsel, Isabel Goodman, de Lange’s decision to wed was seen as:

“an attempt to impose her religious and doctrinal views on the church and its members”.

However de Lange says she was unfairly dismissed from her ministry because of her sexual orientation, after she had told her congregation in December 2009 that she was going to marry her female partner.   She was ordained in 2006 and married her partner on December 15, 2009. She has since divorced the woman and is set to marry again.

Goodman, argued that while same-sex marriages were not a “doctrinal taboo” for the church, de Lange’s announcement of her intention to marry had “forced” it to take a position while the church was still “grappling” with the issue of same-sex marriage. For this reason, she had been suspended and later dismissed, said Goodman.

In January 2010 she was charged by the church’s internal disciplinary committee with breach of the laws governing the church and found guilty. She appealed but this was rejected. She was eventually dismissed on February 20, 2010.

Goodman said the matter was likely to be a “messy, gritty fight” over church doctrine and should therefore be dealt with “within the family” of church arbitration and not in open court. An arbitrator experienced in church law would be able to hear more extensive evidence than a court, she added.  “It is not for the court to decide whether or not there was a rule (about same-sex marriages),” she added.

But Anna-Marie de Vos, De Lange’s lawyer, said a court should decide on the matter, as De Lange’s case was one of discrimination based on sexual orientation, Such discrimination was unconstitutional. She said as there was no “explicit” prohibition of same-sex marriages, De Lange had not broken church rules.It had not been made clear that church members who “pre-empted” a church decision by getting married would be dismissed.“It is a jump of enormous proportions to say… there will be a disciplinary hearing and you will get fired,” she said. She was not asking the court to take a stance on the doctrinal issue of whether gay marriages should be allowed by churches. Rather, she was asking the court to help enforce the church’s own laws. And the law on same-sex marriages at the times was one of “no policy”, she added. Until the church had a policy, it was bound by the constitution, said De Vos. She asked the court to reinstate De Lange as a minister and set aside the findings of the disciplinary hearing.

“she was found guilty of breaching a rule which stated that the church explicitly declined to take a position regarding same sex marriage. It is seldom that somebody is dismissed for breaching a non-existent rule – but this seems to be just such a case. This week she challenged the unfair disciplinary process and the unfair discrimination by the church against her in the Cape High Court. (Full disclosure: my sister, Anna-Marie de Vos, SC, argued her case and I informally advised the legal team.)“

In addition – to my way of thinking this hardly seems a fair reason to fire someone from their post, when they make a personal decision to marry. One wonders how the Church could impose its view on de Lange’s life outside of the Church – is the Church suggesting that same-sex ministers should not be allowed to wed, but that it is acceptable for heterosexual ministers to wed?  Surely that is a separate Constitutional matter and not one for the Church to impose on de Lange. This is not a question of de Lange officiating the marriage of anyone else – its was simply a question of her marrying her own partner or simply announcing such marriage that triggered and led to the firing. After all South Africa’s constitution embraces equality based on sexual orientation and same-sex marriage is legal.

I know many of you are going to jump here and not see that in the interests of separate of church and state which is an important aspect of the South African system, there may be a clash where in fact de Lange deserves consideration of her civil rights. But there is a significant point here. De Lange married under the civil law. Is that a reason to fire her from her job as a minister at the Church, and to add to that the imperative angle that the Church was yet to rule on same-sex marriage.

Outside the court, De Lange said it had never been her intention to “disrupt” the church, but she had decided to take the matter to court as she felt her constitutional rights had been violated. She has since got engaged to her fiancée, Melanie Case.

I spoke to de Lange today, who informed me that arguments went very well, that she was confident that presiding Judge Anton Veldhuizen would rule fairly, and that the Court will rule in her favor, firstly to set aside the unfair arbitration decision upon which the Church relies to currently justify the firing.

I am proud to say that having practiced in the South African Courts myself, the biblical interpretations of homosexuality are going to be left out of this, as the South African Judges are well versed with their role in a system that separates their religious dogma from civil  justice. Hence I will not be putting up any comments that quote biblical verses, as such are quite irrelevant to the case and to the point being made here.

The hope of de Lange is that the Judge will rule that the Church’s arbitration proceeding be set aside so the matter can be ruled on the merits.

Judgment was reserved by Judge Veldhuizen.

A modern day David and Goliath | Rev. Ecclesia de Lange, a South African open lesbian will face her once employer and now

adversary in the Cape High Court.

In 2010 when Rev de Lange announced to her congregation that she was going to marry her same-sex partner, her congregants jumped up and applauded, in what she describes in the video below as a joyful moment. But unfortunately the powers that be in the Church where she served, were not willing to share in the jubilation……  read more