You are here: Home » Violent Arrests at pro-Gay Rally in Russia

Today in St. Petersburg, Russia pro-and anti-gay supporters clashed at a gay pride event organized by “Ravnopraviye” (Equal Rights.) The event had been sanctioned by the authorities.  The rally-march was organized to protest recent legislation banning “promotion of non-traditional sexual relations” in Russia.

Ria Novosti reports that several dozen pro-gay activist people who took part in the rally were confronted by about 200 Nationalist anti-gay activists who threw eggs, smoke flares and stones at them.

“After the complaints of local residents, representatives of the local administration and the police warned the protestors that their protest was illegal and asked them to leave,” a police spokesperson said. Police officers then broke up the protest and arrested dozens of gay rights activists, the spokesman added. 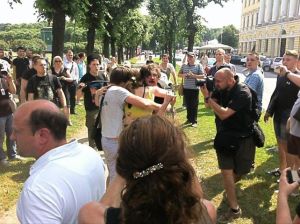 The Russian LGBT Network is reporting that some of the approximately 50 pro-gay activists arrested have since been released.  Some of those arrested  have refused to sign charges which may have been trumped up by police and so apparently they will be held in detention for 24 hours.

Eight of the Nationalist anti-gay protesters were also arrested.

“We staged the rally to support our rights and express our protest against the homophobic law.”

As reported previously here on OBLOGDEE, the lower house of the Russian Duma unanimously passed the legislation two weeks that most pro-gay activists feel will effectively ban gay rights rallies and any vocal support of homosexuality.  The new bill passed is a nationwide version of the 2012 law first passed in St. Petersburg criminalizing the so-called “propagandizing to minors about homosexuality or pedophilia.”

8 Comments on “Violent Arrests at pro-Gay Rally in Russia”