You are here: Home » Moving pictures as slain lesbian laid to rest amidst controversial memorial

A rainbow flag flies amidst the dust as Duduzile Zozo is laid to rest.

The beloved daughter and lesbian community member from Thokoza township, Johannesburg, was remembered and laid to rest at Church Hall & Kromvleiplaas cemetery.

Duduzile Zozo  was found brutally murdered near the home of her mother, after a sexual assault, now believed to be yet another so called “corrective rape,” a crime of hate against lesbians.

The crime is endemic in South Africa and is now being used politically by vying political factions, who purport to care while doing nothing to change the milieu of hate. And so they showed up at the pre-funeral memorial, bringing more chaos and questions to an already deeply controversial climate.

The ANC Women’s league now invoke the question as to whether or not it was right and respectful to attend the memorial and funeral, when the ANC, the ruling South African party, has done very little but pay lip service to these crimes of hate, which target a minority of South Africans.

With the fully inclusive South African equality based constitution, the ANC of Mandela ensured that no group in South Africa would ever be a target for persecution again, but as the former President struggles through these last years of his life, his vision remains unfulfilled, as members of the South African black LGBTI community are victims of persecution through homophobia, and suffer each and every day at this sword of hate.

The body of Duduzile Zozo was found with a toilet brush inside her vagina, a symbol, her grieving mother noted, of the hate for her sexuality and to strip  Duduzile of her dignity and right to being. (Read #1. Below). The mother expressed her love and unconditional acceptance of her daughter and noted that the perpetrator, through his extreme brutality and symbols wants the family to continue suffer because of Zozo’s sexuality.

All the while her family struggles with poverty and the inability to pay for the funeral. ANC President Zuma adorns his many wives with Mercedes. And his women’s league show up for votes.

If it is at all political, then let it be about the LGBTI politics of ending the scourge of hate crimes.  But do not show up for votes – take action if you care- seems to have been the call:-

“The service was opened with a prayer by Pastor Teboho Sentoeli. After that, the mood became very tense when clashes as to who is suppose to speak first between LGBTI groups and political parties, in particular ANC.

“I am frustrated by the excitement and hype around Duduzile’s funeral, it feels as if we are in a political rally, or maybe its because next year is the election“, said Phindi Malaza of FEW.

From the side lines it seemed like the ANC wanted to take over the whole event. However, Magoloza who represented the LGBTI youth in Thokaza, took matters into her own hands by reminding the ANC delegates that the memorial service was not a place to rally for votes, but a place to mourn.”

However all the LGBTI community with each burial asks for an end to the violence through education and outreach and a concentration by police and authorities on bringing perpetrators to swift justice with stringent punishment fitting the horrendous crimes. Families and victims should receive help and support. The suffering is unbearable.  ( See Video of Mother speaking…Read # 2. below)

Will the dust ever settle as we bury comrade after comrade through these crimes of hate?

A 26 year old in a coffin because a man decided that her body was not her own and her sexuality belonged to him – how does a community make sense of such hate? 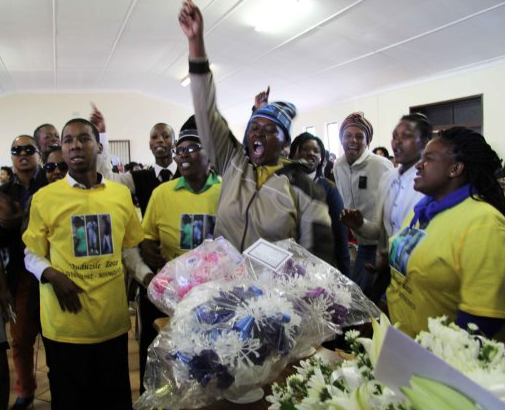 Anger and calls for justice and change

1. Another Lesbian Brutally raped and murdered in South Africa

By Melanie Nathan, July 01, 2013. A lesbian woman has been brutally raped with a toilet brush and murdered in what is believed to have been a hate crime in Ekurhuleni over the weekend. The half-naked body of 26-year-old Duduzile Zozo was found in Thokoza, Ekurhuleni, outside of Johannesburg, on Sunday morning, in what is another […]

Heartbreaking Video expresses the scourge of  Corrective Rape while the South African Task Team Sleeps By Melanie Nathan, July 07, 2013. Last week, a memorial service was held pending the funeral of a beloved lesbian from Gauteng, bringing home the horrendous truth, that “corrective rape” and violence against lesbians continues uncontrollably, despite acute awareness on […]